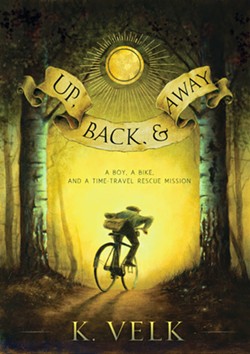 In this twice-monthly Live Culture feature, I review the first 50 pages of a local book — and sometimes, if I feel like it, more. Go to the first installment for a more involved explanation.

This week, the book is Up, Back, and Away, a young-adult time travel adventure by K. (Kim) Velk of Stowe. She self-published print ($14.99) and e-book ($4.99) editions starting in 2013. The e-book currently appears on three Amazon subcategory bestseller lists.

The author
Velk is an assistant attorney general for the state of Vermont who calls herself "a writer by nights, weekends, etc. since forever." She used to write for Albany's alt-weekly Metroland. And she's a knowledgeable Anglophile, as her book-themed blog demonstrates.


The deal
Fifteen-year-old Texan Miles McTavish is on a mission. He must make his way to the top of a Vermont peak lugging an antique Royal Sunbeam bicycle, find a steep trail that leads between two birches, and ride the aforementioned bike down that trail while clutching a magic stone. If he does all this, he'll be transported back to 1928 — England in 1928 — where he must aid a "girl born out of her time."

Why exactly is Miles doing this? He got the commission from Professor Davies, his former employer at a vintage bike shop in Texas, who got his instructions from a gypsy. Mysterious gypsy directives, we soon learn, have featured prominently in the lives of Morgan Davies and his family. Born well before World War I in Tipton, the rustic English village where Miles' quest will land him, Davies made his own time jump to Vermont in his youth (that's how he's still alive in 2012). Miles, too, has an eerie connection to Tipton: His model-train layout features a village that replicates it exactly.

The first sentence
"'No offense, man, but I hope you aren't planning on riding that thing down from the peak,' said Carl, as his truck banged over two sets of railroad tracks."


My favorite sentences
"The setting sun now warbled through the ancient glass, casting pools and curlicues of sunlight on the celery-green carpet and the mahogany paneling on the wall opposite." (Yeah, I like "warbled" — so sue me. It suggests a "warbling" brook, with a metaphorical slippage from sound to motion to light.)

And: "It's incredible. Like an orchestra in a book of matches." — a 1928 native on encountering an iPod.

A quote that puts the book in a nutshell
"The realization that 1928 was going to be like one long camping trip then penetrated into his shaken, sore head. No indoor plumbing, no electricity, at least not at Peppermore's cottage, and worse, no Wi-Fi…"

Will I read the rest?
Already have. It took me a few tries to get into Up, Back, and Away. But once Miles woke up in 1928 with a huge bump on his head and encountered a fast-talking English lad whose pluck and self-sufficiency make modern kids look like sheltered wusses, I was hooked.

In short, the appeal of this book doesn't lie in the time travel, the attendant mystery or really anything to do with the protagonist. It lies in Velk's loving, convincing re-creation of England in the era when the gentility of "Downton Abbey" met the vitality of the Jazz Age.

You can read here about the workday routine of a country cottage, the rigid manners of a grand manor (where Miles finds work as a footman), and the hurly-burly of London jazz clubs and music halls. Every setting is filled with people whose language and attitudes feel true to the period — from sassy housemaids with names like Violet Shivers to aging Calvinist spinsters to an ambitious Irish orphan who dreams of singing her heart out on the stage.

Their reactions to Miles, and his to them, can be funny and revelatory. A running joke is Miles' incredulity when he meets people with then-common English monikers such as Ginger, Lettice and Dorcas (or, to his ears, Dorkus). When informed that jazz is racy music associated with the counterculture, he objects, "Where I'm from it's more like, the kind of music old people listen to over dinner…"

Miles is likewise shocked by rampant child labor — but the hard work and fresh air do this kid some good, even as he pines for his various devices. (Velk isn't so preachy as to tout the superiority of a world without them.)

If you seek an entertaining historical fiction with a fish-out-of-water protagonist, I can fully recommend Up, Back, and Away. But I should also issue a warning: Don't read this book if you care deeply about the mysteries of time travel or why gypsies choose to facilitate it. Those mysteries will not be solved, ever.

Time travel in this book is a device used to get a modern kid to 1928 (and why from Vermont? That's never explained, either) so he can have cool adventures. Velk never gives Miles much of a motivation for undertaking this bizarre quest: Imagine a version of Back to the Future in which Marty McFly traveled back in time solely as an act of loyalty to an ailing Doc Brown. That's nice and all, but far less compelling than giving your hero a personal stake in the outcome, like making sure his parents end up together.

That may be a big reservation for some readers, but it's my only one. As self-published books go, Up, Back, and Away is clean and well edited (though this editor did note a few recurring problems with commas and possessives). The prose is strongly descriptive, but the plot is fast moving and divided into kid-friendly short chapters.

This is a charming book with an easy, flowing writing style that should really appeal to older kids who've fallen under the "Downton" spell — and their history buff parents. Just don't read it looking for an SF or fantasy treatment of time travel, and don't ask questions about that pleasantly wacky premise.

A note to authors: I choose books for this column at my own discretion. Please don't send me your book with a specific request that I feature it here (or not do so). Please don't ask for an explanation either way. And please recognize that these write-ups are not always "reviews," which would entail reading the entire book.