What I'm Watching: The Descent 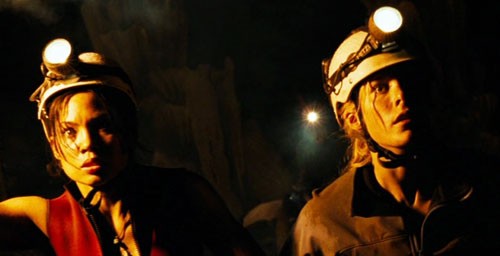 As I write this, the students in my film theory class are taking their final exam, in which I have exhorted them to be as specific as possible in crafting their arguments. I’ll know in a couple of hours whether any of them have chosen to make specific reference to The Descent, the last assigned film for the semester.

I’ve liked The Descent since I saw it in 2006 during its initial American release. (Though set in the U.S., the film was made in the UK by a mostly British and Scottish crew; it was released in the UK about a year before it premiered in America.) I’ve also found it to be a good “teaching film” that works particularly well in the context of my film theory course.

The film tells the story of six female friends who literally descend into the earth to explore an extensive underground cave system. At least five of them do so without sufficient foreknowledge, as the most adventuresome of the bunch, Juno, misleads them into thinking they’ll be exploring a better-known and -mapped cave system.

That’s not the only wrongheaded thing Juno does. As we watch the film, we come to understand that she also had an affair with Paul, the now-deceased husband of the protagonist, Sarah. Paul and Sarah’s young daughter, Jessica, were killed in a car accident in the film’s second scene. Sarah survived the crash, but not without severe psychological scarring. She’s tormented by flashbacks and visions, mostly of her daughter.

It’s a year after the accident when the women decide to explore the cave, and Paul’s and Jessica’s deaths hang over their reunion. Those deaths — as well as Juno and Paul’s affair, with which the deaths come to be ever more strongly associated — are not the only things hounding Sarah. After several literally narrow escapes through collapsing stone tunnels, the women find themselves pursued by ferocious troglodyte humanoids with a taste for blood. These “crawlers” are blind, but use their excellent hearing to locate and devour the women, one by one. 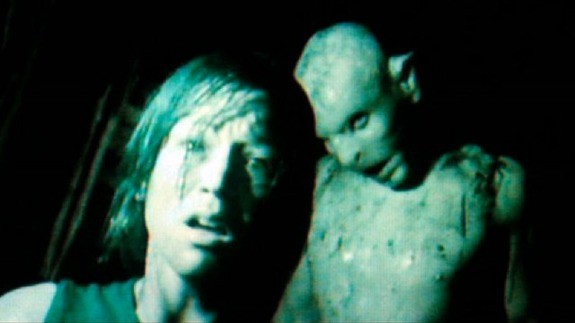 One of the reasons that The Descent works well in a film theory class is that it’s a clever, well-made film that affords plenty of opportunities for analysis through the lenses of some of the more aesthetically minded theorists. As my students and I discussed in our final class meeting, such theorists as Jean Epstein and Rudolf Arnheim would be interested in how The Descent uses cinematic devices to create experiences that are distinctly unrealistic. For both of these thinkers (in different ways), cinema’s true value lies in the ways in which it uses its unique artistic capacities to differentiate itself from reality.

As my students noted, The Descent’s director, Neil Marshall, often shoots the scenes of crawler attacks in such a way as to make the creatures’ movements bizarre and unfamiliar — as if the crawlers move according to a kinetic system entirely their own. While I’m not positive of the technique that Marshall and cinematographer Sam McCurdy used to achieve this unusual look, my guess is some sort of adjustment to the camera’s shutter. Ridley Scott uses a similar effect in Black Hawk Down, and the effect is to make characters’ movements look both stuttery and sped-up. It’s subtly disorienting. In that such a technique uses cinematic tools to create a decidedly unrealistic effect, it would delight those film theorists whose ideas are rooted in close observation of a film’s stylistic systems.
But The Descent also dangles carrots in front of theorists whose ideas are entirely unlike those of Arnheim or Epstein. The film is deeply (he said with a grin) Freudian, in that Juno’s and Paul’s sexual misconduct indirectly results in the deaths of many characters, and in the psychosis of the main character. The descent that Sarah undertakes is not just a literal one but a metaphorical one into madness. (This is a very well-titled film.) In fact, the film suggests multiple times that the entire spelunking expedition takes place only in Sarah’s mind; that is, there is no literal descent at all.

Inasmuch as the film’s story may be guided by sexually induced psychosis, theorists like Thierry Kuntzel would, my students concluded, find it intriguing. Kuntzel was among the many film theorists who analyzed films as a Freudian psychoanalyst would analyze patients: by looking for latent meanings. For Kuntzel, direct representation in films was uninteresting, just as Freud found the “true” meaning of dreams by unpacking their oft-twisted symbolic logic. The “true” meaning of The Descent has to do with Sarah’s encroaching psychosis, and Kuntzel could easily have launched one of his famously long and detailed film analyses with this notion at its heart. 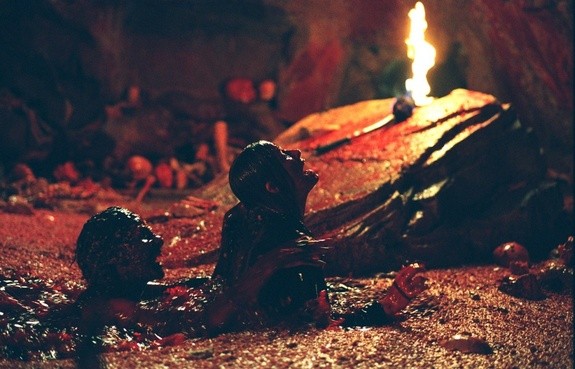 For other Freudian film theorists, though, The Descent would be more problematic. Renowned feminist film theorist Laura Mulvey, whose landmark essay “Visual Pleasure in Narrative Cinema” my students read this semester, would have trouble with The Descent. One of Mulvey’s most famous claims is that, in mainstream cinema, female characters exist so that male spectators can take pleasure in gazing at them. She also argues that male spectators are granted a secondary way to enjoy films: by “identifying” with their male characters, who inevitably, she says, drive the films’ stories. Cinema spectatorship, then, Mulvey writes, is primarily oriented toward the male viewer.

Yet the only male character in The Descent (other than a few crawlers) is Paul, who has about two lines before he is killed in a car crash. The only characters who take action of any kind in this film are female. And, as my students found, these characters are never presented in the film in ways that embody what Mulvey, in a rather dreadful turn of phrase, calls “to-be-looked-at-ness.” The Descent is not the only film that challenges Mulvey’s assumptions in this way; indeed, her sweeping generalizations are unreasonable and out of date.