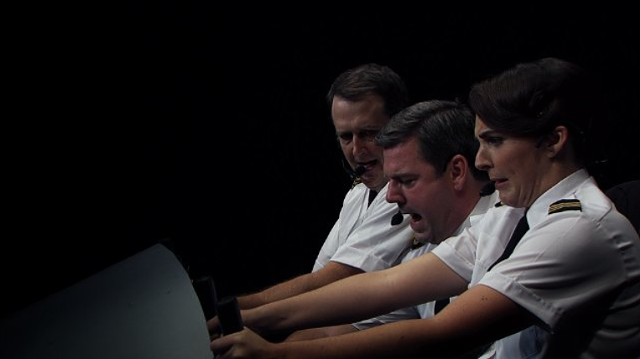 This week in movies you missed: If you've been following coverage of the Germanwings tragedy, you've read a lot about cockpit voice recorders in the past week. By coincidence, Netflix Instant recently added this movie — a filmed theater piece that is, in essence, a series of re-enacted air disasters from the pilots' point of view.


Motivated by morbid curiosity, or perhaps by healthy curiosity about how people operate in crisis situations, or perhaps just by my lack of plans to fly any time soon, I gave Charlie Victor Romeo a watch.

What You Missed
The New York arts nonprofit Collective:Unconscious premiered Charlie Victor Romeo on stage in 1999. It's a bare-bones work in six parts, each depicting a real air disaster using only dialogue taken from transcripts of cockpit voice recorder data (hence the title: CVR) and minimally edited for clarity.


Seven actors play all the crew members and voice the air traffic controllers. Occasional sound effects indicate alarms or impacts. We don't see the passenger cabin or the view outside the plane.

At the end of each segment, a card informs us of the cause of the accident and the number of casualties, which range from zero to a horrifying 520 (in the case of the 1985 bulkhead explosion and crash of JAL 123, the worst air disaster on record).

But our focus is not on the carnage. It's on the valiant, desperate efforts of pilots and copilots to save failing planes.

Why You Missed It
Directed by Robert Berger, Patrick Daniels and Karlyn Michelson, the film Charlie Victor Romeo captures the stage performance — in 3-D, but with no added bells or whistles. It premiered at Sundance in 2012 and doesn't appear to have reached many U.S. theaters.

Reasons to Keep Missing It

1. You have imminent travel plans and prefer not to spend the whole flight with white knuckles and eyes squeezed shut.

2. You find re-enactments inherently tacky and unconvincing. (Richard Brody recently made this argument in the New Yorker, in reference to "The Jinx." Check it out.) Or perhaps you think they're disrespectful to the dead in this case.

3. You need movies to be "cinematic." Charlie Victor Romeo is literally just a view of actors sitting in a fake cockpit, which poses the question of why in the world the film was shot in 3-D and what you could possibly gain from seeing it that way.

4. You're not a pilot or flight engineer, so how will you understand anything that's going on, anyway? Matt Singer of the Dissolve calls Charlie Victor Romeo "a surprisingly slack exercise" because it's so minimalist that "viewers are left to try to make sense of the action through the dialogue, which is laden with impenetrable technical jargon."

Reasons Not to Miss It

1. You're fascinated by the dynamics of crisis situations, and how highly trained professionals react under stress. The disasters in CVR run the gamut: Some are brutally short, others gruelingly long. In one segment, the pilots go from zero — relaxed, flirting with a flight attendant — to full-on crisis mode in a matter of seconds. Other segments start with the malfunction and show us the aftermath.

Throughout, we admire these pros for (mostly) keeping their cool and not swearing a blue streak as they face situations as dire as flying blind at night with no altitude readings, or being able to turn the plane only in one direction. Suddenly our own work crises seem a little less, shall we say, important.

2. Re-enactments can serve a distinct function, and CVR demonstrates that.

Brody says most documentary re-enactments keep us from using our imaginations — and, when it comes to the murders in "The Jinx," I agree. But if I simply read the transcripts that compose CVR, I'd be baffled and bored. It's the actors who make the "impenetrable technical jargon" meaningful to the lay viewer with their expressiveness. (Perhaps for similar reasons, the Pentagon has used CVR for training purposes.) We understand the crisis through their emotional reactions to it — the sweat, the clenched jaw, the tone of restrained panic.

3. And the actors are good. When Daniels plays the pilot of United 232, for instance, his repetition of the phrase "No left turns" moves from monotone disbelief to grim irony, as if he can't believe fate put him on an aircraft so grotesquely disabled. These people don't need backstories to have distinct personalities — which makes the typical endings of their stories all the more distressing.

Verdict: For the reasons enumerated above, I didn't find CVR to be "slack," as Singer did. On the contrary, I was white-knuckling a lot harder than I do during the vast majority of action flicks. The film left me wanting to know more about these disasters — check out the links here — and filled with a new appreciation for pilots and the complexity of what they do.

CVR wasn't "fun," but it was harrowing, educational and weirdly inspirational (because of the professionalism on display). I'd rather know this stuff than not … yes, even next time I step on a plane.

This Week in Theaters
Everywhere, fast and furious racers do fast and furious things in Furious 7. At the Roxy, the drama '71 brings us back to the Troubles in Belfast. At the Savoy, Ethan Hawke explores the inner world of a classical pianist in his documentary Seymour: An Introduction.

Plus: See The Babadook at the Palace 9 (the only Burlington-area engagement of the acclaimed Aussie horror flick) and late-night showings of bad-film "classic" The Room at the Roxy.

This Week in Your Living Room
The Imitation Game, Interstellar, Wild.