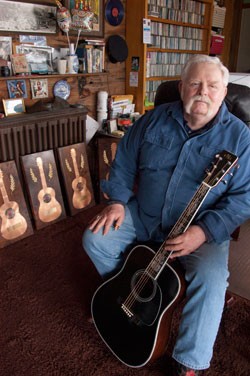 Local songwriter Rick Norcross was on the verge of becoming the Susan Lucci of western swing music awards. Last year, Norcross and his band, the All-Star Ramblers, were nominated for the  Best Western Swing Group/Duo award by the Academy of Western Artists. FYI, that's an organization whose stated mission is to, "recognize and honor outstanding individuals who, through their accomplishments, preserve and perpetuate the traditions, values and heritage of the American cowboy." Or in other words, Rick Norcross. (Fun fact about the AWA: The organization is based in Gene Autry, Okla. Yes, really.)

Well guess what? Last weekend, deep in the heart of Texas, Norcross scored a win in that last category for his tune "You Can"t Make It Up."

The whimsical little number from his 2014 record Welcome to OUR Vermont operates on the premise that truth is stranger than fiction. Norcross would know. A few of his career highlights include rambling around London as a songwriter with Paul Simon in the 1960s and working as a rock journalist and photographer for the Tampa Bay Times covering the likes of Led Zeppelin and Janis Joplin.

One of our favorite verses from Norcross' biographical and now award-winning tune concerns working up the nerve to ask a pretty girl to the prom in Hardwick, Vt., and then having to buy a corsage from the local funeral parlor since there was nowhere else in town to buy flowers.

You can't make it up.

Here's a version of the tune from the Ramblers' 2013 record Riding My Guitar. Congrats, Rick!