What I'm Watching: "House of Cards"

I may spend a lot of time watching and thinking about old movies, but that doesn’t mean I’m immune to the allures of modern-day television. Though I probably didn’t watch its third season in as much of a binge as did such avid fans as, say, President Barack Obama, I am now officially up to date with Netflix’s hit show “House of Cards.” (Season three of the show premiered less than a month ago, on February 27. That still seems pretty current to me, so this column contains no spoilers.)

Netflix, of course, has been leading the battle to upend the way we watch TV, releasing all of the episodes of its original programs in roughly annual, single-season bursts. Fans of “House of Cards,” like me, may now watch it at as rapid or as pokey a clip as they wish, and I must say that this is a liberating experience. The act of waiting a week for a show’s next episode already seems like an antiquated one, yanked kicking and screaming from an era in which “primetime” still meant something.

That old “one-show-a-week” model is especially clunky, I think, when the content of the show is challenging, unusual or “cutting-edge,” as is the case with a couple of the other shows I follow, “Archer” and “Better Call Saul.” I love these shows, but, honestly, I’d rather watch them on my own schedule, not those of the networks that broadcast them. Though I’m hardly the only one to voice this opinion, I can’t imagine that Netflix’s “drop all a season’s episodes at once” model won’t catch on.

Forward-thinking though that broadcast model may be, it’s not the feature of “House of Cards” that interests me most. Three things about the show are even more intriguing. The first is that “House of Cards” has reawakened in me something of an interest in American politics, a subject I used to follow closely but which has disappointed me more and more in recent years, as hardline partisanship has taken over every single issue. It’s amusing to me that a fictional show about crooked politicians has made me more interested in real-life politics. Insert punchline here, I suppose.

Of even greater interest are two of the stylistic hallmarks of “House of Cards.” In the admittedly scant media coverage of the show that I’ve read, I’ve been surprised that a bigger deal has not been made of the unusual way in which “House of Cards” breaks the "fourth wall." It’s usually at pivotal narrative moments in the series that its main character, Frank Underwood (Kevin Spacey), turns to the camera to utter an acid aside.

Characters speaking to the camera is hardly new, nor is the act of addressing the audience an artistic revelation. But I admire “House of Cards”’ use of this device for a couple of reasons. The first is that it’s anything but overused, occurring only a few times per episode, and always for darkly comic effect. An example from season one is below. The second reason I like this device is that, in granting viewers special access to Underwood, it forges a bond between us and a morally questionable character. The rupture of the fourth wall is on the surface a comic device, but it’s ultimately a narrative device. It fosters a kind of closeness between viewers and this one character, but that means we’re sympathetic toward a man who is amoral, if not immoral. It’s not easy to put viewers in a moral quandary like this, and the show handles it beautifully.

But the really special thing about “House of Cards” is its overall visual design. Shot in HD on the game-changing Red camera, the show looks like it was hewn from blue-gray steel. Its colors are massively desaturated, leaving behind a cold palette of blues, browns, grays and, above all, blacks. “House of Cards” is about the forces of corruption that are the prime movers of government, so it’s metaphorically a dark show. But it’s also literally a dark show, thanks to a series of videographic choices that render its images cold and forbidding. 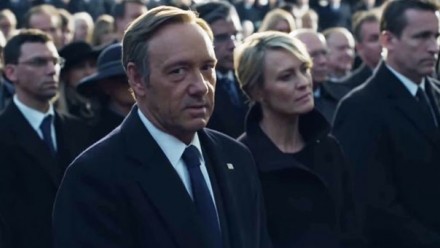 This article from American Cinematographer refers to several limitations that the show’s co-executive producer, David Fincher, imposed on the production: “no Steadicam, no handheld and no zoom lenses.” Which is to say: This is a show that operates within fairly strict stylistic guidelines; without those three devices, many a current director could barely shoot even a simple conversation scene.

Those guidelines extend, as mentioned, to color and lighting, as well. Later in the article, Eigil Bryld, the director of photography for the show's first season (and therefore a key player in establishing its overall "look"), notes that Frank Underwood “is often disappearing into darkness or emerging from darkness,” a choice that suggests that the show’s creators are fully aware of both the literal and the metaphorical meanings of “darkness.”

Bryld also notes that another of the show’s general guidelines is to use low light levels and a uniform color temperature, but that the show uses brighter light sources “the closer we get to power” — political power, that is. This sounds at first like a bit of a contradiction, as Bryld has just said that Underwood, the show’s central and most powerful character, is associated with darkness. But “House of Cards” is a show where the most powerful characters are also the most corrupt characters; by associating those characters with both bright light and darkness, the show emphasizes at the stylistic level its fundamental narrative concern with the notion of moral ambiguity.

If this kind of thing interests you, you may also wish to listen to this extended interview with second- and third-season cinematographer Igor Martinovic, in which he gets into some hardcore gearhead detail.

"House of Cards" is a show that looks as smart as it thinks — which is what has kept me engaged for every single episode of its three seasons.