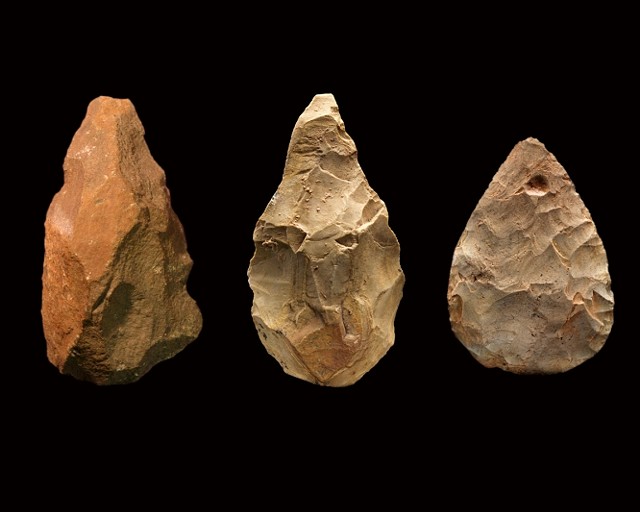 They might not have called ahead about it, but you should know that your relatives are coming to town. So are mine, and your neighbor’s, and those of your bank teller and barista. You can meet them all in downtown Burlington.

The Fletcher Free Library has just been selected as one of just 19 sites to host “Exploring Human Origins: What Does It Mean to Be Human?,” a traveling exhibit based on a permanent feature at the Smithsonian’s National Museum of Natural History. The exhibit — which features hands-on displays, videos and interactive kiosks — is cosponsored by the American Library Association, and will be at the Fletcher from February 18 through March 17, 2017. Talk about planning ahead.

The 1,200-square-foot exhibition addresses such topics as the various archaeological digs that have yielded information about human origins, the tools and ornaments made by early humans and the development of language and a uniquely human form of social interaction.

Rubi Simon, the director of the library, spoke with Seven Days just a couple of days before flying to Washington, D.C., where she and 18 other library representatives will receive a training course in working with the exhibition. “We’re really excited about the training,” she said. “We’ll see what other places will be doing with [the exhibit], … so we can talk and brainstorm.”

In addition to a $500 stipend for hosting costs, each library that hosts the exhibit will have all delivery, installation and speakers’ fees paid for by the Smithsonian. The institution will also foot the bill for a documentary that will be produced about the travels of the exhibit.

For the month that it’ll be in Burlington, “Exploring Human Origins” will take over the library’s main reading room. Simon said that the complexities of moving all the furniture will be outweighed by the presence of the exhibit. “We figured we could sacrifice that space for four weeks,” she said.

Simon also foresees using one of the library’s virtual assets: its 1GB internet connection, which she says will be used to stream some of the exhibition’s online programming.

The exhibition’s steering committee, Simon said, consists of members from local schools, museums and religious organizations, among other groups, and the library has ambitious plans to design special programming and educational curricula around “Exploring Human Origins.”

“We’re reaching a whole, broad range of groups that maybe don’t get to have these conversations [about human evolution] with each other, or maybe only within their own institutions,” said Simon.

The library director didn’t seem particularly concerned about the fact that, for some, evolution is still a controversial subject. “Burlington is just such a progressive, great community that is always open … to having these types of conversations,” she said.