Movies You Missed: The Overnighters 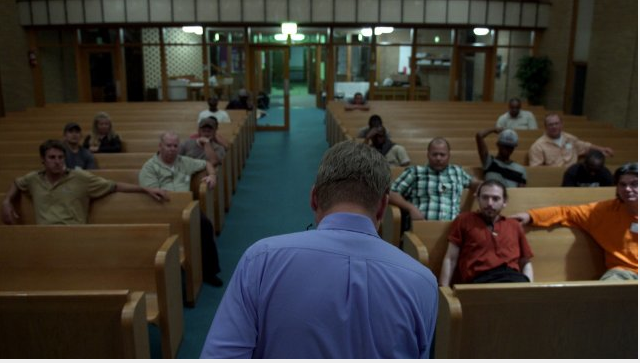 This week in movies you missed: The film that should have been nominated for a 2015 Best Feature Documentary Oscar is a dark, mesmerizing portrayal of hope in hard times, and what it means to practice Christian charity today.

What You Missed
Filmmaker Jesse Moss went to Williston, N.D., because he wanted to see what a 21st-century gold rush looks like. (Read more in this interview with Paste.) In the few years since hydraulic fracking gave birth to the North Dakota oil boom, the small town has swelled from about 15,000 residents to more than 20,000.

The boom has touched off a new labor migration within the U.S., reminiscent of The Grapes of Wrath: Thousands of men who can't find employment in their own states have flooded into Williston and similar towns, enticed by rumors of six-figure oil-field jobs. The short doc "White Earth," an Oscar nominee in its category, profiles some of those migrants through interviews with their children.

Moss took a different tack. He spent six months sleeping in Williston's Concordia Lutheran Church, where Pastor Jay Reinke created a refuge for would-be workers unable to find housing in the crowded town. His film follows Reinke as the pastor struggles to continue housing these desperate men in the church and its parking lot, against mounting opposition from his congregation, his neighbors, Williston's daily newspaper and its governing body.

Reinke did background checks on all the migrants he hosted — who ranged from able-bodied workers with clean records to weathered felons and substance abusers. But when he chose not to turn away a couple of registered sex offenders, he handed his opponents a powerful weapon.

Why You Missed It
The Overnighters was released in 23 U.S. theaters. You may have caught it at last fall's Vermont International Film Festival. It's now on Netflix Instant and various other streaming services.

Should You Keep Missing It?
No.

I recently read Michel Faber's latest novel The Book of Strange New Things, about a pastor who gets on a spaceship and goes to tell aliens about Jesus (really). Watching The Overnighters reminded me repeatedly of that book, and that's a testament to what a rich work this is, and how different from a documentary that's primarily driven by an issue or agenda.

Faber's hero is a genuinely good but blindered man who discovers his limits over the course of an unusual ministry. As Moss presents him, so is Reinke.

The doc opens with Reinke at what feels like a Gethsemane moment, looking away from the camera as he admits that there's always been a gap between his public persona and private reality. Then Moss backpedals to show us how the pastor reached this state of painful introspection.

At first, the pastor we see is unrelentingly positive, hopeful, giving. This is a man who runs out with childlike enthusiasm to wave at passing Amtrak trains, a man who hears the distressing confessions of violent people with a permanent nonjudgmental twinkle in his eye. Reinke's belief in human possibility is so fervent that he even seems to have transmitted it to his wife and teen children — the people who suffer the most from his frequent absences, and his choice to house strangers in their home.

We watch Reinke fight tirelessly for people who lack other advocates. We watch him go door to door and plead for the cause of the "Overnighters" with neighbors who snap back that the men's misfortune isn't their responsibility. It's an understandable attitude, but Reinke's simple response resonates. "It is his problem," he admits of a migrant who lost his home, "but I'm trying to help him."

And that's why we don't lose sympathy with this would-be shepherd, even when he reveals that he, too, is all too prone to human error.

Verdict: Moss had a rare level of access to his subject. Given the revelations Reinke makes to his camera, some viewers may feel like voyeurs, while others may wonder if the pastor was attempting to use the filmmaker to spin his story. Because it raises those very issues, and because it documents a unique American migration, The Overnighters is worth seeing — and discussing.

This Week in Theaters
Cinderella is back, and this time she's a real live actress wearing a corset. Liam Neeson must Run All Night to save his son instead of his daughter this time. Oscar nominee Leviathan is now at the Roxy.

This Week in Your Living Room
Night at the Museum: Secret of the Tomb.