This week in movies you missed: In the latest from writer-director Kelly Reichardt (Meek's Cutoff, Wendy and Lucy), former child stars set out to explode things for the planet.

What You Missed
Oregonians Josh (Jesse Eisenberg) and Dena (Dakota Fanning) have a plan. It involves buying a boat in cash from a retiree. Scouting out a massive hydroelectric dam. Connecting with a former Marine (Peter Sarsgaard) who lives in a trailer and knows a thing or two about fake IDs and explosives. Purchasing 1000 pounds of ammonium nitrate fertilizer from a very suspicious clerk (James Le Gros).

Their plan does not involve hurting anyone. But even best-laid plans can go awry.

Why You Missed It
Night Moves picked up a few film fest awards and played 56 U.S. theaters, none in Vermont. I watched it on Amazon Prime; it's also on DVD and Blu-ray.


Should You Keep Missing It?
Some critics have called Night Moves Reichardt's most accessible or "conventional" film to date. That's probably true, because I like movies to observe a few narrative conventions, and it's the first film of hers that has stuck with me.

My usual highly scientific 20-point scale for the evaluation of indie films:

1-4 points: Does it look pretty?
4/4. When you make a movie about people who consider themselves defenders of nature, it helps to make nature a powerful presence on screen. Christopher Blauvelt's cinematography makes the most of the Oregon lakes and forests; the scene where the activists take their boat (named Night Moves) across the lake to their destination has particularly stark, striking shots of a swampy area at dusk. 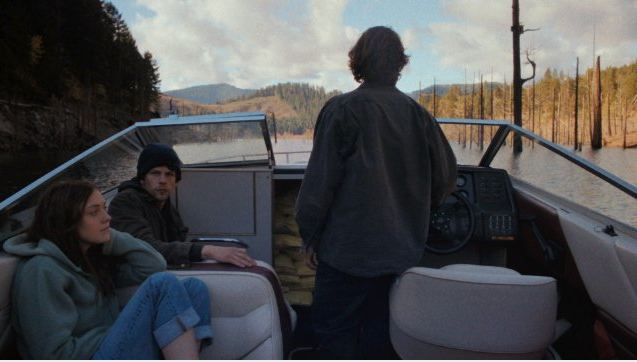 1-4 points: Does anything happen?
3/4. The lack of stuff happening has been my biggest problem with Reichardt's previous films. This one has a stronger narrative thrust and a laudable commitment to procedural detail, as we watch the characters proceed through each phase of their plan. Each unexpected element — a stray camper trying to make conversation, say — builds the tension until it reaches a high pitch.

Just don't come expecting a thriller, because Night Moves is still a very slow-burn film. And don't expect to see that dam explode, because it's also a low-budget one.

1-4 points: Does what happens make sense?
3/4. Up to a point. Reichardt clearly knows something about eco-extremists and the wider culture from which they spring. Josh sleeps in a yurt and packs CSA vegetables; at one point, he converses with a farmer who announces that he's "burned his cheese license." No one is stereotyped, and alternative, non-violent approaches to ecological crisis are represented.

The film's main problem is that Josh's actions don't always make sense to us, because we don't know him that well.

1-4 points: Do the characters seem like real people? Failing that, do they look pretty?
2/4. Sarsgaard and Fanning have vivid presences: His character is the good ol' boy anarchist, hers the poor little rich girl, all brittle self-assurance.

But Josh is the linch-pin of the movie, and Reichardt and Eisenberg go out on a not-entirely-solid limb with his character. Sullen and laconic — the exact opposite of the hyperverbal characters Eisenberg usually plays — Josh clearly has a closeness to nature that other people don't, or wants to. (In one early scene, he insists on stopping the car to push a dead pregnant doe out of the road, while Dena watches incredulously.) He expresses his motivation for massive property damage in one angry, flippant sentence, yet we can see his feelings go deeper. It's just that we can't access them — which makes the film's climax troublesomely opaque and weightless.

1-4 points: Does the movie give us a reason to care about anything happening on screen?
3/4. Despite what I just said about the bungled climax, I thought the more low-key final scene of Night Moves was ironic and devastating. Reichardt is more a visual than a verbal artist, and her visual language has impact here.

Take a shot from the inside of an RV, which shows "The Price Is Right" playing on a TV in the foreground while, through the windshield, we watch the explosive boat trundling into the campground. It's a pretty obvious juxtaposition of industrial civilization (at its most crass) with those who seek to destroy it.

Heavy-handed as it may be, this shot (and another one earlier in the film) helps set up a powerful final image. By the end, we see the world of TVs, cellphones and ubiquitous cameras through Josh's eyes — and see him marooned there, exactly where he never wanted to be.

Verdict: 15/20. Worth a look if you're prepared for a film that pivots on a big honkin' disaster it never shows.

This Week in Theaters
At the Roxy and Savoy, Marion Cotillard plays a working-class mom who endures Two Days, One Night of begging for her job.

Elsewhere, Will Smith cons people in Focus, and Mark Duplass raises the dead in The Lazarus Effect.


This Week in Your Living Room
Beyond the Lights, Big Hero 6, Horrible Bosses 2, Whiplash.