This Week in Movies You Missed: This quiet, black-and-white Polish drama from cowriter-director Pawel Pawlikowski (My Summer of Love) is up for two Oscars: Best Foreign Language Film and Best Cinematography. It's easy to stream, and well worth seeing.

Folks who like self-consciously "old-fashioned" movies, but not the kind full of treacly sentimentality, should especially check Ida out.

What You Missed
Poland, early 1960s. Anna (Agata Trzebuchowska), a young novice living in a convent, has one task before she can take the veil: She must visit her only known living relative, her aunt Wanda (Agata Kulesza).

City dweller Wanda is a worldly, jaded loner who serves as a Communist Party judge, handing down penalties to "enemies of socialism." She takes one look at Anna's habit and asks caustically, "A Jewish nun?"

Indeed. Anna learns that her name is actually Ida. She landed in an orphanage after her parents died during the Nazi occupation. Wanda doesn't know where they're buried, but she has suspicions — and so the two women set out on an unlikely road trip in search of Anna/Ida's past.

Why You (Probably) Missed It
Ida is a borderline case for MYM, because it played at the Savoy Theater for a week and at Merrill's Roxy for two or three. If you still missed it, like me, you can catch it on Netflix Instant and Amazon Prime.

But make sure you watch it in the right aspect ratio. Ida was shot in "Academy ratio," or 1.37:1, which means it should look boxy on a wide-screen TV. When I watched it on Netflix, alas, it was wide, perhaps because I didn't know the proper ratio and didn't adjust my TV settings accordingly. I found conflicting reports here of the format in which Netflix is streaming Ida, but supposedly Amazon has it right. Here's a Tumblr devoted to Netflix's habitual disrespect of intended aspect ratios.

So, lesson learned. There are cases where your TV shouldn't be set to 16:9.

Here's the trailer, demonstrating how your screen should look:


Should You Keep Missing It?
Using my usual silly scale for the evaluation of indies:

1-4 points: Does it look pretty?
4/4. Did I mention I watched Ida wrong? It still looked amazing (though a little weird).

Pawlikowski uses wide shots and long takes, with the action often near the bottom of the frame, to situate his characters in the bleak remembered world of communist Poland. While I'm not usually a fan of this "austere," measured style, his careful compositions didn't get boring for me. The film's world felt like a time capsule — a less colorful and circusy version of what Wes Anderson does with the '60s in his movies.

In this interview, Pawlikowski talks about his "stripped-down" style and how it allows the audience to "live the film differently" than we do today's hyperactive spectacles.

1-4 points: Does anything happen?
3/4. Yes. This isn't one of those art movies where the plot is doled out with painful slowness; it has an effective dramatic arc, and stuff has changed by the end.

1-4 points: Does what happens make sense?
4/4. Yes. But the interpretation of what happens varies with the viewer. The YouTube comments on the film's trailer resonate with the vituperative anger of a certain contingent of viewers who see Ida as anti-Polish, anti-Christian propaganda driven by a so-called "Jewish agenda." 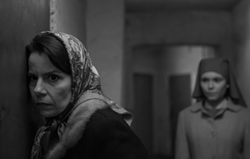 Leaving aside the unspoken agendas of said comments, and the creepiness of YouTube comments in general, that was quite a surprise. Rarely have I seen a film that seemed less driven by external ideology and more by the internal necessities of the characters. To me it's neither a Christian film nor an anti-Christian film, but simply one in which the protagonist is a devout believer.

1-4 points: Do the characters seem like real people? Failing that, do they look pretty?
4/4. The contrast between the two lead characters — wide-eyed Ida, who looks like a blank slate but is smart and self-willed; and cigarette-smoking, whiskey-swilling, sardonic Wanda — keeps the movie riveting.

1-4 points: Does the movie give us a reason to care about anything happening on screen?
3/4. I didn't see Ida as a referendum on Polish peasants' treatment of the Jews during World War II, or on Catholicism, or on communism. Rather, it's a coming-of-age story about one of those transitional experiences that make us who we are.

The movie closes with Ida/Anna making a decision that is unexpected within the conventions of that modern coming-of-age genre — yet, to me, logical and oddly touching. I'm curious to know what others thought.

Verdict: 18/20. Regardless of what happens on Oscar night, Ida is worth a look — in the right ratio.

This Week in Theaters
A teenage girl struggles to upend the stigma of being The DUFF (Designated Ugly Fat Friend). Kevin Costner leads a cross-country team to victory in McFarland, USA. The Hot Tub Time Machine returns for a sequel, minus John Cusack.

This Week in Your Living Room
Birdman, Dumb and Dumber To, The Homesman, The Interview, Life Itself, St. Vincent, The Tale of the Princess Kaguya, The Theory of Everything.