Movies You Missed: It's Such a Beautiful Day | Live Culture

Movies You Missed: It's Such a Beautiful Day 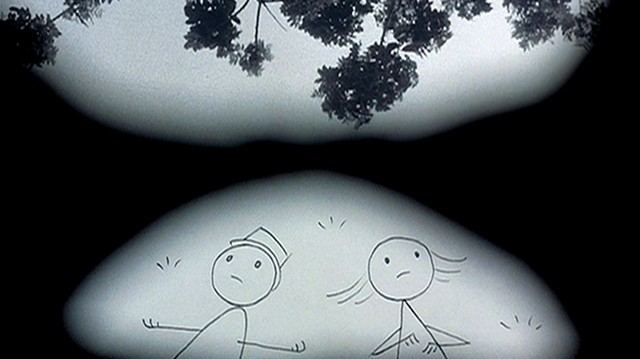 This week in movies you missed: I've been hearing about Don Hertzfeldt's It's Such a Beautiful Day since it was theatrically released (barely) in 2012. Last month, the acclaimed animator — who does everything himself, with minimal computer assistance — won his second Grand Jury Prize at the Sundance Film Festival for his latest short, "World of Tomorrow."


The feature-length It's Such a Beautiful Day is finally available for streaming on Netflix Instant, so I got my first taste of Hertzfeldt's work. Or maybe I should say this little cartoon snuck up, slammed into me, convinced me I was about to have a seizure for a few seconds, and left me awed, shaken and in tears.

Lesson 1: Always beware of films with titles that sound like somebody's daily affirmation (e.g., Life Is Beautiful, Everybody's Fine). They aim to make you cry.

Lesson 2: See this one anyway.

What You Missed
It's Such a Beautiful Day started as three short films: "Everything Will Be OK" (2006), "I Am So Proud of You" (2008), and "It's Such a Beautiful Day" (2011). They share a protagonist: a top-hatted stick figure named Bill. Hertzfeldt's voice narrates and relays all the dialogue to us, along with Bill's thoughts.


Bill lives inside white cut-out spaces that twitch nervously on a black background. He gets up, stands at the bus stop, goes to the store, calls his ex-girlfriend. He sleeps and dreams of a gigantic fish living on his head.

Gradually we learn that Bill is not well. He picks up pills at a clinic, visits doctors who speak of surgery and deliver vague, ominous prognoses. At the bus stop, he has a seizure that abruptly jolts his controlled, black-and-white world into color.

Eerie photographic images begin to appear at the margins or in the background of Bill's inner landscape, taunting him and us with the possibility of a richer experience. Memories and imaginings of the future flit across his mind. But are they harbingers of healing from his unnamed illness or of death?


Why You Missed It
You may have caught It's Such a Beautiful Day at the Green Mountain Film Festival in 2013.

Currently it's available for streaming on Netflix, Google Play and iTunes. (For more than a decade, Hertzfeldt has made a living selling his films on DVD and taking them on theater tours. Here's an excellent interview with more information about his process, and the "Bill" films in particular.)


Should You Keep Missing It?
I've always had a troubled relationship with animation. To be honest, it creeps me out. There's something about being trapped inside the surreal, exaggerated world created by an artist's brain that bothers me in a way no live-action horror flick can do. My memories of being most terrified as a small child involve "Mr. Magoo" and "Scooby-Doo" cartoons. (And yes, Dr. Seuss bothered me, too. For a kid without a TV, the visual weirdness was just too much.)

Even today, given the choice between an animated film or show and a live-action one, I always choose the latter — even though I've derived enormous enjoyment from Rango, from the work of Hayao Miyazaki, from Disney and Pixar and even the Despicable Me series. Even though I know that most modern blockbusters are half computer animation (or more), I cling to remnants of realness: actors' faces, hands, props. Animation just makes me feel unsafe.

In It's Such a Beautiful Day, Hertzfeldt seems to acknowledge that animation can give us a feeling of insecurity, of being trapped in someone else's fever-dreaming brain — and he uses it. Employing drawings, hand-composited images, multiple exposures, artful sound design and classical music (including some choices that mirror Terrence Malick's), he places us inside the mind of an individual whose mental illness can twist the world unrecognizably.

Bill's hallucinations are frequently draining and terrifying — and his family history, when we start to learn it in "I Am So Proud of You," just adds more nightmare fuel to the fire. How much of this is real, how much imagined? We have no idea. The protagonist never wakes (as so many protagonists in the literature of mental illness do) to a clean white room where a doctor explains exactly what's wrong with him. There is no "objective" perspective. 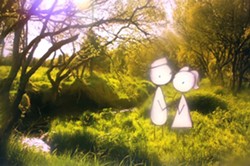 What there is, surprisingly, is a form of grace or transcendence or epiphany or whatever you choose to call it. In the film's third section, color takes over Bill's world, and it's no longer the lurid color of madness — or is it? We can never be sure. Yet Hertzfeldt invites us, along with Bill, to take a leap of faith in the possibility of a "beautiful day." It's a choice that wrecks us, and a necessary one.

Verdict: Not a cartoon for your kids, unless you want to induce a precocious fit of existential angst. But teens and adults who don't know Hertzfeldt's work should check it out while it's still streaming.

This Week in Theaters
The Wachowski siblings return with the long-shelved SF epic Jupiter Ascending. Similarly dusty is the fantasy Seventh Son, starring Jeff Bridges as a drunken witch hunter or something. For the kids and the stoners, there's an animation whose very name weirds me out: The SpongeBob Movie: Sponge Out of Water.

This Week in Your Living Room
The Best of Me, Dear White People, The Disappearance of Eleanor Rigby, Dracula Untold, John Wick, Ouija, The Overnighters and Starred Up (which I just spied on Amazon Prime).