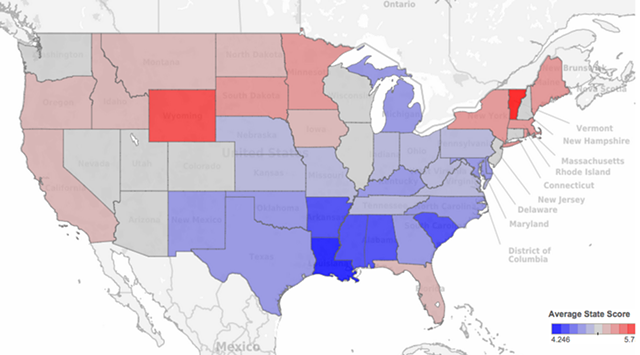 There’s good reason why much of the country suffers from Vermont Envy. Lots of reasons, actually. The Green Mountain State isn't just another pretty place. It’s got brains to match.

Do I make this claim because Vermont has the country’s highest number of universities per capita (1 for every 36,000 residents)? I do not. Or because the state ranks first in the nation for writers per capita? Nope. Not even because, as Vermont State Librarian Martha Reid reports, “We have more public libraries per capita than any other state (183). “In FY13,” she adds, “Vermont libraries reported 3.6 million visits!”

That’s right. According to a study just published by the California-based online real estate giant Movoto, Vermont isn’t merely among the smartest states, it is the smartest state. And how did it arrive at that conclusion? It read our tweets.

Seriously. Ours and those written by residents of every other state — more than a half million of the 140-or-less-character communiqués, in fact. And then the company analyzed them to determine the average grade reading level and IQ state by state, using a computer algorithm to score tweets based on factors such as spelling, grammar and word choice. Points presumably were deducted for Twitter pics of users wearing only towels. (Geraldo Rivera may single-handedly have prevented New Jersey from cracking the top five.)

Speaking of which, I give you the five smartest states:

And the five where attaching pics of yourself in just a towel is apparently really common:

Those five bringing up the bottom weren’t the only ones who got bad news. The country as a whole came in at just below a fifth-grade reading level. A fact that would be sorry enough if the statistic were arrived at solely through Twitter-based science. But the sad reality is that the Movoto findings closely mirror recent official state education performance statistics. That would be enough to strike the average American dumb if, you know, the average American already wasn’t.

So, congratulations, Vermont. That’s a pretty impressive Twitter profile. According to my calculations, we’ve got about 316 million followers.