This week in movies you missed: What's the saddest Christmas movie ever made? I've not talking a mournful-yet-ultimately-heartwarming classic like It's a Wonderful Life. I'm talking sad.

There's director Lynne Ramsay's cult favorite Morvern Callar, which opens with a young woman lying on the floor beside her dead boyfriend — who has committed suicide — while Christmas lights pulse around her.

Writer-director Zach Clark's White Reindeer starts from a strikingly similar premise. He even develops it in Christmas-centric fashion — unlike Morvern, which moves past the holiday in its first hour. Variety declared that the movie "will be treasured annually by those who have acquired its curdled-eggnog taste." That's a big claim, so I checked White Reindeer out.

What You Missed
Perky suburban real estate agent Suzanne Barrington (Anna Margaret Hollyman) loves Christmas. In the movie's first few lines, she declares herself the kind of person who wants to put up the tree and break out the eggnog the day after Thanksgiving. So of course we know something bad is going to happen to her.

It does. On December 1, right after she's touted the safety of her neighborhood to a couple of prospective buyers, Suzanne discovers her husband, TV meteorologist Jeff (Nathan Williams), with a bullet through his brain. The couple had plans to relocate to Hawaii before Jeff fell victim to a robbery gone wrong. Now the sounds of Suzanne's beloved luau-style Christmas music resound through a desolate home.

And she faces cognitive dissonance as well as grief: How can it be Christmas when she's miserable? 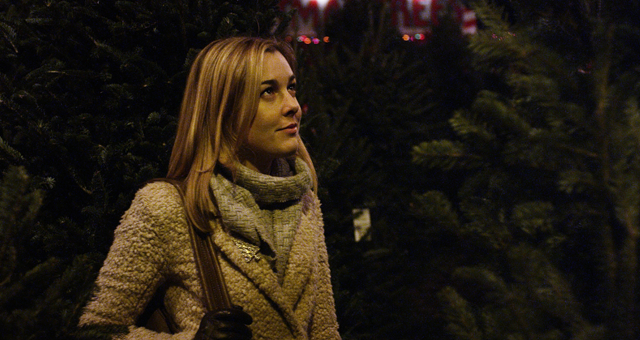 Why You Missed It
You may have caught White Reindeer almost exactly a year ago at a Burlington Film Society screening. If not, now you can break out the curdled eggnog and watch the 2013 flick on Netflix or Amazon Instant.

1-4 points: Does it look pretty?
1/4. Like Happy Christmas, which I watched last week, White Reindeer is essentially a mumblecore film. (Joe Swanberg, director of HC, even shows up playing half of a swinger couple to whom Suzanne sells a house.) Unlike the much artier Morvern Callar, it doesn't have striking images to relieve the gloom of Suzanne's suburban holiday kitsch.

1-4 points: Does anything happen?
2/4. Movies about grief are tough on the audience, because there's nothing dramatic about how most people process it. Take the scene where Suzanne goes on an online shopping spree and fixates on a model in a red sweater as an image of the person she'd like to be right now. A plausible way of coping, but not terribly interesting to watch.

More promisingly, Suzanne finds out her husband had a secret life involving a stripper (Laura Lemar-Goldsborough) and seeks out the younger woman. That's the most sustained and compelling plotline, yet the movie has a shambling, episodic quality that keeps us from caring too much about the outcome of this or any particular situation. I'll admit it: My attention wandered.

1-4 points: Does what happens make sense?
4/4. White Reindeer's saving grace is that, yes, most of it does. The film's first few scenes suggest that we're in for an over-the-top black comedy. So it's a surprise to find that Clark treats his characters like people, not stereotypes, and avoids spinning off the plot in madcap, hyperreal directions. Take away the Christmas hook and it's a believable movie about mourning, for better or worse.

1-4 points: Do the characters seem like real people? Failing that, do they look pretty?
4/4. Hollyman deserves the lion's share of the credit for making White Reindeer watchable. Recently seen in Vermont-raised Zachary Donohue's horror flick The Den, she has a bristling, terrier-alert energy that seems perfectly suited to comedy, yet she never resorts to mugging. The instant we see Suzanne, we know she needs to feel in control, and we continue to believe in her as she falls apart and cuts loose.

Despite the cartoonish beginning, Clark's script generally eschews broad strokes. The stripper isn't a typical movie stripper, and even the swingers next door (everybody's favorite comic device, not) turn out to have a bit of depth.

1-4 points: Does the movie give us a reason to care about anything happening on screen?
2/4. White Reindeer has good points to make about secular Christmas love and the role it plays in people's lives, but it spells them out for us. It also uses an all-too-familiar device to bring Suzanne to the requisite teeny-tiny final epiphany. I respected the movie, but it never surprised me the way Morvern Callar did.

Verdict: 13/20. While not memorable enough to go on my all-time list of Twisted Christmas Flicks, White Reindeer is worth a watch for the novelty of its premise and Hollyman's performance. Break out the eggnog and burn the yule log!

This Week in Theaters
Reese Witherspoon goes Wild, at the Roxy and Essex.

The new version of Annie is set in the present-day world of foster kids (presumably annoyingly perky ones who like to burst into song). There's a third Night at the Museum flick, featuring Robin Williams' last performance. Oh, and Peter Jackson brings us about three more hours of hobbits, dwarfs, sexy elves, flaming swords and the like.

This Week in Your Living Room
Magic in the Moonlight, The Maze Runner, The Skeleton Twins, Teenage Mutant Ninja Turtles, This Is Where I Leave You.