What I'm Watching: "Too Many Cooks" | Live Culture

What I'm Watching: "Too Many Cooks"

Like so many other internet fun-seekers, I recently watched and was pleasantly astonished by Casper Kelly's short film "Too Many Cooks." First broadcast in the dead of night on the Adult Swim network on October 27 and released online early this month, the short quickly — and deservedly — went viral, attracting coverage not just from the expected host of content-hungry websites but from major news organizations such as the Atlantic, New York Magazine, CNN and the Wall Street Journal.

I'd hazard that the film's single most important touchstone (right down to its font choice) is the opening-credits sequence of the 1980s sitcom "Full House," but also invoked are those of such shows as "Growing Pains," "Family Matters," "G.I. Joe," "Hill Street Blues," "Hunter" and "ALF," to name a few. "Full House," though, seems to have just about all of the ingredients that "Too Many Cooks" parodies so deftly: heartwarming family situations; zany, good-natured antics; a terrible earworm of a theme song.

I can't recommend that you look up the "Full House" opening credits on YouTube; I just did, and regret it. Man, that's some generic television-making — exactly the thing that "Too Many Cooks" lampoons.

"Too Many Cooks" starts as a fairly straightforward parody, but in short order descends into madness. It shifts genres rapidly, shatters the "fourth wall" gleefully and often, and happily draws out jokes well past their breaking points. It's recursive, self-reflexive, extremely meticulous in its construction and, above all,  intelligent. The film is a little bit of a marvel, in fact, and one of the sharpest, most incisive bits of media metacommentary that I've watched in a long while. If you haven't seen it yet, do yourself the favor.
"Too Many Cooks" is a rich and complex text, even though it's only 11 minutes long, and contains much to digest. One thing that many critics seem to have missed, though, is the way the film uses storytelling devices. More than one of the above-mentioned periodicals refers to "Too Many Cooks" as a nonnarrative work, which surprises me.

This clever short film might, in its rapid-fire flipping between disconnected fragments, appear to lack a story, but that's not the case at all. The story of "Too Many Cooks" is scattered and somewhat baffling, but the film uses fairly conventional narrative devices in smart ways.

The masterstroke of "Too Many Cooks" is its makers' understanding that most viewers actually expect TV shows' opening-credits sequences to contain story information. Some contain mini-narratives themselves. One example: the original "Star Trek" series, with its quick summary of the Enterprise's overall mission.

More common are the credits sequences that contain information relevant to their shows' overarching narratives actually being fully formed narratives. "Growing Pains"' and "Full House"'s are good examples of this type. In them, we learn key information about the characters' surroundings, appearances, personality types and interrelationships: exactly the kinds of things a first-time viewer would want to know before diving into an episode.

In "Too Many Cooks," we quickly glean story information of this type about the seemingly normal characters who are the ostensible stars of the show: Mom, Dad, kids, Grandma. Only 30 seconds into the film, something strange begins to happen: The filmmakers introduce another narrative strain that threatens to undermine the first. As "Too Many Cooks" continues, this secondary narrative — which involves a crazed serial killer — starts to take over, eventually obliterating the bland (if slightly off-kilter) story suggested by the shots of the "normal" family.

At 30 seconds in, we first see the killer, who lurks on a stairway while the generic sitcom family engages in nutty antics. He's barely noticeable. At the one-minute mark, this ostensible opening-credits sequence would seem to end — and on a typically "zany" note, at that: Dad sets the time on a camera but fails to get in place before the picture is snapped. The freeze-frame of the happy family on the couch, with Dad caught mid-sit, is a picture-perfect parody of how actual sitcoms' credits sequences often end: with mild sight gags that emphasize how fun-loving the show's characters are.

But then the song continues, and more and more characters are added to the show's cast. As the roster grows, so does the narrative significance of the killer, who appears again at 1:15 (in the background, out of focus); at 1:38 (scrutinizing a spice bottle as the fourth of four cooks whips up a homey meal); at 1:54 and 2:04 (when the show has unaccountably morphed into an office sitcom); and 2:24 (on the stairs again for another botched photo).

These are all blink-and-you-miss-'em moments. I'd argue that the killer's first truly noticeable appearance is at 3:17, when (after the show has now become a parody of cop shows) he slowly rises from a crouch from behind another character, staring right into the camera. This is the breaking point for the film; from here on in, it get increasingly weird.

But it also gets increasingly story-driven. We come to understand that the killer can somehow jump among the sitcom, the cop show and the primetime soap, etc., that constitute "Too Many Cooks." Only later do other, "normal" characters start to do the same thing. So in a way, the killer establishes the narrative "rules" for the other characters. (The killer also breaks those rules. Whereas every other actor is identified by their glowing, yellow superimposed names, the killer's name is obliterated by putative broadcast imperfections.)

More than that, though, the killer is our first character with an actual goal: to kill and eat people. Everyone else is just a character stereotype; the killer is somewhat better developed.

The killer's murderous rampage thus straightforwardly parallels the ways in which "Too Many Cooks" satirically destroys the sitcoms to which it refers. Another way of seeing it is that the film's increasing narrative complexity (represented by the killer's story arc) supplants the film's fragmentary nature. In other words, "Too Many Cooks" gains a stronger and stronger narrative identity as it proceeds.

More than this, the film gains in "narrative value" by borrowing story elements from the various types of shows it parodies. They're not fully realized — which is the point — but narrative tropes from all kinds of shows inform the overarching quasi-story of "Too Many Cooks." We have the angry, African American police chief pounding on his desk in the cop-show segment; the "bad boy," Fonz-like character gesturing insouciantly at the camera; the spaceship (which somehow bears the head of the killer) shooting laser blasts at another ship; and the woman who clunkily spins in place to become a superhero.

As soon as we see these story fragments, we understand a little bit more about the complex, multifarious narrative "world" in which "Too Many Cooks" resides. Only two things unify these disparate shows: the banal theme song that scores them all, and the killer rampaging through them. 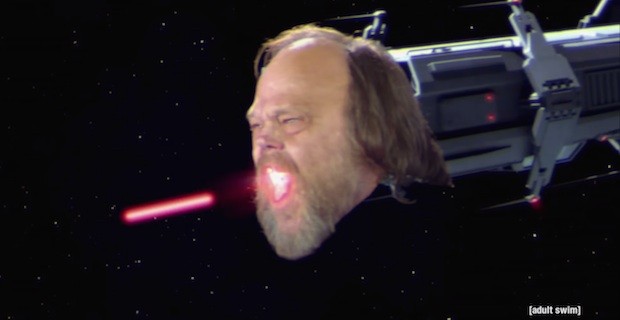 The ending joke of "Too Many Cooks" is that the 11-minute "credits sequence" finally ends, and Dad enters the living room. The "show" ends before he can even finish saying, "Honey, I'm home!" In other words, before the putative episode's putative story can even commence.

Thing is, we've been watching a story unfold for the entire 11 minutes — it's just a fragmented, incomplete, semi-sensible story that includes everything from dinosaurs to magical robot cats to naked Pictionary. That this parodic, 11-minute-long "credits sequence" itself ends with a parody of closing credits — a hugely long list that flies by at unreadable speed — is hilarious in part because it's an ironically suitable ending.

Just like in every other episode of every other sitcom, the story of this episode of "Too Many Cooks" is capped by rolling credits. The episode itself may be one long opening-credits sequence, but that doesn't mean its story can't achieve closure. In its weird, reflexive way, that's exactly what happens. 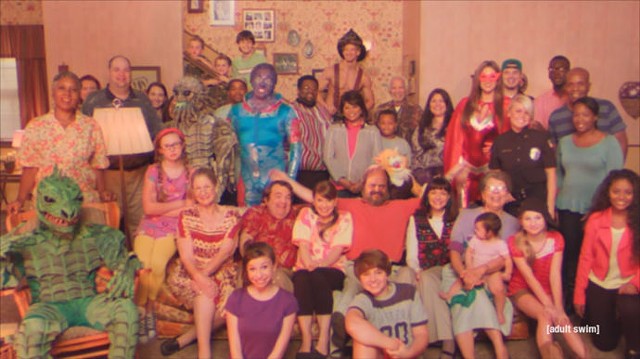