Movies You Missed: The Double 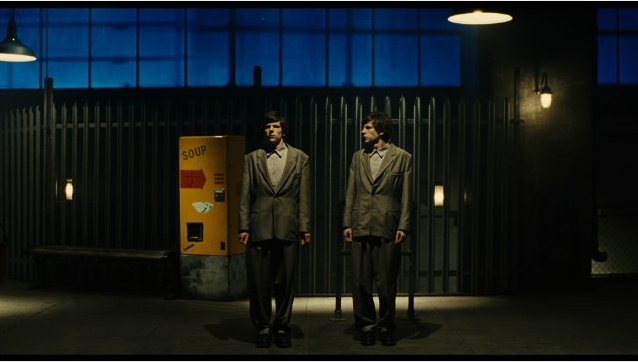 This week in movies you missed: Are two Jesse Eisenbergs better than one?

What You Missed
Simon James (Eisenberg) is a loser. Total strangers order him to vacate his seat on the subway. His fellow employees at a drab government agency barely recognize him. Hannah (Mia Wasikowska), the depressed, ethereal girl he loves, doesn't know he's alive. He uses a telescope to observe her through her window and carefully retrieves the torn-up artwork she throws in the trash.

Then James Simon (also Eisenberg) enters the picture. The new employee could be Simon's physical twin, but he's outgoing, gregarious, likable, manipulative. In no time at all, James has Simon doing favors for him and Hannah in his bed. He knows how to make her happy — and unhappy, it transpires.

Friends initially, the doppelgängers become enemies when James shows his sociopathic colors. But when you're unlikable and unmemorable, how can you fight someone who's the charismatic movie-star version of you?

Why You Missed It
The Double, a loose adaptation of Dostoyevsky's novella by the same name, is the second feature from director Richard Ayoade (Submarine; he also starred in "The IT Crowd"). The 2014 flick played at festivals and 16 U.S. theaters; you can watch it on Netflix and Amazon Instant.

1-4 points: Does it look pretty?
4/4. Oh, damn, does this movie look cool. Let's start with the production design: Brazil is an obvious influence, but The Double takes place in an indeterminate setting that evokes Dostoyevsky's St. Petersburg, the Nixon era and the whole history of dystopian cinema. The garb is a mix of decades, while the tech is circa 1975, as is the beautifully cheesy sci-fi show that Simon enjoys watching.

The lighting, the framing, the shooting — every image is carefully composed to emphasize the bleakness of Simon's world and his alienation from it, contrasted with James' seamless integration.

1-4 points: Does anything happen?
2/4. This is one of those slower art films where the atmosphere outweighs the plot and dialogue. Which would be OK, given the quality of the sounds and visuals — except that Dostoyevsky's tale, and Eisenberg's talent, seem to offer more raw material than Ayoade ultimately exploits.

1-4 points: Does what happens make sense?
2/4. Given that the tale can be taken as a metaphor for the unraveling of the psyche, it doesn't really need to. We just have to feel Simon's desperation as his evil double steals the remaining bits of goodness in his pitiful life.

And we do, sometimes. For most of its runtime, The Double suggests a Kafka story: The protagonist's life just keeps getting crappier and crappier, despite his fitful efforts at self-assertion. But toward the end, the script reaches for a magical-realist logic and a quasi-affirmative resolution that don't really work, given that the whole situation already obeys the wilder logic of spiraling delusions of persecution.

1-4 points: Do the characters seem like real people? Failing that, do they look pretty?
4/4. Maybe not "real people," but a colorful cast — including Wallace Shawn, Cathy Moriarty, Noah Taylor, Sally Hawkins, Chris O'Dowd and J. Mascis as a janitor — ensures that they're at least inspired caricatures.

Eisenberg plays both roles low-key. He seems less like two polar opposites than like the timid and arrogant facets of his Mark Zuckerberg in The Social Network — suggesting that, if they tried, these two crazy kids could get along. If his James lacks something in animal magnetism, his Simon makes up for it with his all-too-poignant speech about wanting to be a "real boy."

1-4 points: Does the movie give us a reason to care about anything happening on screen?
2/4. My biggest issue here: This story calls out for a strong script, and Ayoade's errs on the scanty side. He's very good at staging nonverbal moments of comic humiliation, such as the opening scene on the train (which could be a Kafka outtake). But when it comes to verbal wit — which James uses as a seductive weapon — he gives us all too little.


I'm not suggesting I would have been more involved if The Double had resembled a stage play. But the director's focus on impeccable visuals ended up distancing me from the fidgeting and suffering of the characters. I'm eager to read the Dostoyevsky book and see if it provides the intense, cathartic discomfort that I didn't experience watching this version. Judging by Notes From the Underground, I would guess so.

Verdict: 14/20. For me, this is a cleaner Eraserhead (there are many promising similarities), not Blue Velvet. It's an art film that could have had a wider reach, but its restraint keeps it from connecting with the audience.

Last spring brought us another art movie about a sinister double, Denis Villeneuve's Enemy, starring Jake Gyllenhaal. Will I like it better? I hope to find out soon.

This Week in Theaters
Most everywhere, Jeff Daniels and Jim Carrey reprise their roles as two numbskulls in Dumb and Dumber To.

At the Roxy and Savoy, Miles Teller drums his hands bloody (for real) in the Sundance hit and awards contender Whiplash. At the Roxy only, Jon Stewart makes his directorial debut with a sober-looking prisoner-in-Iran film called Rosewater, which this review assures me is actually funny in places. We'll see.

This Week in Your Living Room
How to Train Your Dragon 2, Let's Be Cops, Jersey Boys, Mood Indigo, Tammy.