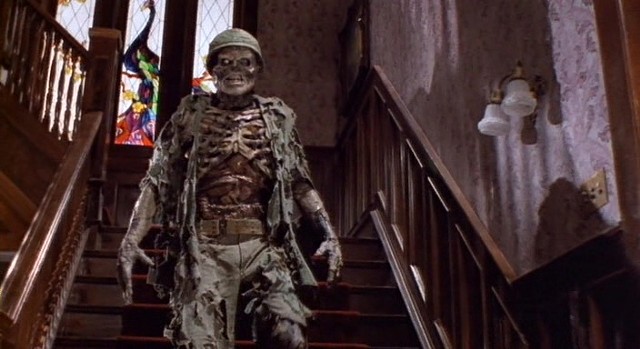 I'm always interested to revisit, as an adult, the movies that I saw a million times on cable television when I was a kid. The experience is always one of nostalgia mixed with a wide-eyed reassessment of my youthful taste in film.

A recent meandering through Netflix offerings yielded a familiar image: one that was on the poster (and the VHS box) for the 1986 horror-comedy House, a film I watched on probably a monthly basis in the late 1980s. And that cover image! A disembodied zombie hand ringing a doorbell with the accompanying text, "Ding dong. You're dead." Man, I remember that so clearly. I couldn't resist hitting PLAY immediately; fortunately, my wife, who typically isn't that interested in films like House, was too tired to put up any resistance. (She picked the next one.)

House is notable for many things, not least the website dedicated to it, which seems to have been last updated in about 2002. It's kind of awesome. 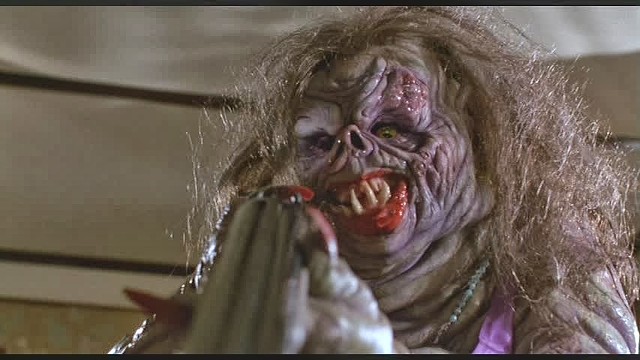 Most of my other memories of the film are scattered. I recalled that the film's story had something to do with a writer's Vietnam flashbacks, but otherwise I'd mostly held onto just a few visual fragments: a zombified/skeletonized Richard Moll in full battle attire; a window (which turns out to be a medicine cabinet) that opens onto a vast, empty, black room; and the presence of George Wendt, whom I've always thought was an underused actor. He fits squarely in the Jon Lovitz camp: oddball '80s comedic actors who should have gotten more and better parts. Come to think of it, Richard Moll is in that camp, too.

What I didn't remember was how stark House really is. The film's moments of comedy stuck in my memory, but House is actually a pretty grim depiction of a man not only enduring post-traumatic stress disorder but living with the agony of the disappearance of his only child and the suicide of his beloved aunt.

The film's main character, the novelist Roger Cobb, inherits from that aunt an allegedly haunted old house, where he spent a great deal of time as a kid. Though he's under pressure from his publisher to turn out another of the horror novels for which he's famous, he intends to hole up in the house to work on his memoir of his tour of duty in Vietnam.

Soon, the haunted house produces from within its walls a series of bloodthirsty beasts. It also opens up a kind of portal to the Vietnam of some 15 years earlier, and Roger is forced to relive the moment when his friend and platoonmate, "Big Ben," is taken away by Viet Cong soldiers to be tortured.

Roger has to relive the event that has traumatized him almost as much as his son's disappearance: Big Ben's accusation that Roger is responsible for his torture. Ben wanted Roger to kill him, but Roger couldn't manage it.

Needless to say, the monsters that leap from the house's closets and mysterious portals are materializations of Roger's traumas, the demons he needs to purge from his psyche. When I was 14 or so, and in the prime of my House-viewing days, I wasn't clever enough to pick up on the film's central metaphor, even if I did get pretty good grades in my English classes. To teenage me, House was a gory, funny movie that happened to have as its main character a tormented Vietnam vet. I never really linked the film's horror with Cobb's trauma.

Watching the film a couple weeks ago, not only did I notice the linkage between Cobb's mental anguish and the film's monsters, I was astounded by how heavy-handed it is. I'm a little embarrassed to have missed that connection the first time around. My wife found the film's bluntness a bit tiresome, and I certainly see her point. House is not a particularly subtle film. 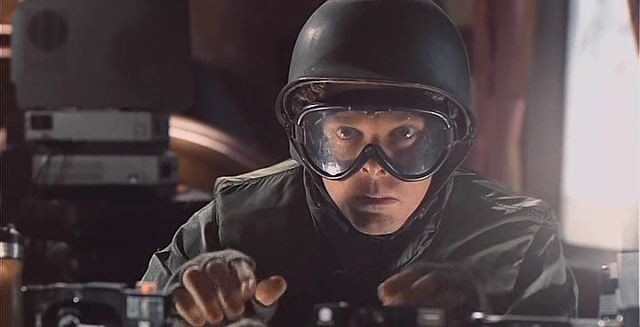 I'm happy to report, though, that House is still fairly funny. Not as much as I remember, but it does have moments of clever visual comedy. The standout for me is the scene in which a disembodied corpse hand attaches itself to the shirt of a small boy. The kid, gamboling joyfully around the house, has no idea that his life is in danger; Roger is the only one who sees the demonic hand, and he goes to comic extremes to pluck it from the kid's shirt and somehow destroy it. (He eventually grabs it and flushes it down the toilet.)

This is a great example of a scene that depends on narrational range for its comedy. That term refers to states of knowledge: how much we (the audience) know, as opposed to how much the characters in the film know. In this case, the comedy comes from the fact that we can see what Roger sees — the hand clinging to the back of the kid's shirt — but the kid doesn't know he's in danger.

The film's director, Steve Miner, handles the scene smartly, frequently using shots that simulate Roger's optical point of view to emphasize this comedic difference between the two states of knowledge.

I find it fascinating how our perspectives and opinions on artworks change as we get older. House still has its pleasures for me, but I can't say that I enjoyed it as much as when I was a teen. But it comes out ahead of the 1981 comedy The Incredible Shrinking Woman, which I probably saw at least twice a week for a three-year period as a kid. Watched that one again a few years ago and, good lord, is it a stinker.