Movies You Missed: The Dirties 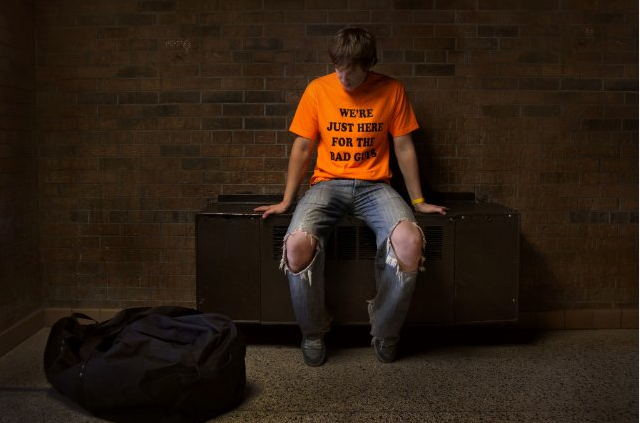 This week in movies you missed: Yes, there's a found-footage film about a school shooting. But it's not the sensationalist attention-grab you might expect.

What You Missed
Matt (Matt Johnson, who also directed, produced, cowrote and co-edited) and Owen (Owen Williams) are two Canadian high school students making a movie. It's called The Dirties, and it's a revenge fantasy about destroying the bullies who dog them at school.

Matt, who has a basement full of movie posters, has stuffed his debut auteur effort with swaths of dialogue from Pulp Fiction and obscurer references to films like Irreversible. Owen is happy just to go along for the ride and "shoot" prop guns.


But there's a problem. When the boys' teacher (David Matheson) sees the product, full of ultra-violence and profanity, he asks them to go back and produce a "PG-13 cut" to show the class. The class finds the PG-13 cut giggle-worthy. While Owen starts earning the affections of a popular girl (Krista Madison), Matt becomes more and more alienated. Soon he's fantasizing about revenge in earnest.

Or is he in earnest? When half the things someone says are movie quotes, it can be hard to tell.


Why You Missed It
Johnson's first feature was a 2013 awardee at the Slamdance Film Festival and had a limited U.S. release; Kevin Smith championed it via his Movie Club. You can watch it on Netflix Instant and other platforms.

Check out the trailer:


Should You Keep Missing It?
My 20-point, highly scientific scale for the assessment of indie films:

1-4 points: Does it look pretty?
2/4. This is found footage supposedly shot by high schoolers, OK? That said, Johnson manages to give us a sense of place, as in a scene where Matt and Owen argue on a bluff with a stunning lake view below.

1-4 points: Does anything happen?
3/4. Yes, but here's the thing: While most filmmakers might start the third act with the school shooting, this film ends moments after things get ugly.

The Dirties isn't about the violence, but the slow buildup to the violence, which will disappoint viewers looking for thrills. It is to ripped-from-the-headlines movies what The Blair Witch Project was to horror movies: If you're not interested in the characters and their motivations, you'll hate it.

Me, I was hooked from the first scene, in which Matt and Owen scout park locations and encounter a pair of younger kids who are also shooting a movie, because who's not these days? One kid (Padraig Singal) gives a synopsis of his film that's way more off-the-wall than anything in Super 8, and even better when you learn that he's not an actor and none of it was scripted.

As Johnson explains in this interview with Cinema Scope, much of the film's footage really was "found." The crew had permission to shoot in an actual high school during school hours, and many of the reactions come from people who thought the events they were watching were real. For me, careful editing made it all hang together, and I didn't find the pace too slow.

1-4 points: Does what happens make sense?
3/4. Here's my biggest problem with swallowing the premise of The Dirties: The cameraman (or cameramen?) doesn't speak, is never clearly identified and never figures in the story. Matt is clearly obsessed with getting his life on film, and he and Owen discuss tech like their wireless body mics, but it's not clear who's doing the actual shooting.

Again in this interview, Johnson gives an articulate explanation of that choice:

We made an early cut of The Dirties in which the presence of the cameramen was explained more. But when we screened that version it just wasn’t working at all. There were so many weird psychological problems with it, as if you couldn’t get into the film because you felt like the whole story was just happening between these four kids and had nothing to do with you the viewer. But as soon as we took out all references to the camera operators, you could watch it and feel like you were there.


In terms of increasing immediacy, the choice makes sense. And yet, by removing the cameraman as a character, Johnson actually focused this viewer's attention on him, making me wonder, What is up with the kid holding the camera? Does he have a disorder that prevents him from speaking? Does he have a secret agenda? Does he hate Matt? Will he finally appear on screen and reveal himself as a mastermind in the last scene of the film? I was disappointed when no such twist manifested.

Yes, many found-footage films suffer from let's-explain-again-why-the-cameraman-is-still-filming syndrome. Johnson's solution is bold, but it didn't quite work for me. I would have appreciated a coda that somehow recognized the operator's existence. (Perhaps he did the final cut and edited himself out of the film?)

1-4 points: Do the characters seem like real people? Failing that, do they look pretty?
4/4. My biggest complaint about found-footage movies is when the actors act like they're acting. Aside from Matt — who, the story establishes repeatedly, dramatizes every second of his life — the players in The Dirties are suitably low-key. Furthermore, Matt and Owen are creepily plausible as high schoolers, even though Williams teaches high school in real life.

1-4 points: Does the movie give us a reason to care about anything happening on screen?
4/4. Does the movie explain why all school shootings happen? Hardly. But it is a plausible portrayal of how one smart and disturbed kid might progress from a grumbler and revenge fantasizer to someone with a duffle bag full of guns.

The most disturbing part is that Matt retains his ironic self-awareness as he creeps closer and closer to doing something irremediable. When he asks his mom if he's crazy, or consults Owen on which T-shirt he should wear to a school shooting, they don't take him seriously because he's always saying weird, attention-getting shit. No one bats an eye at his reading Columbine books or comparing himself to Dylan Klebold, either, because that's just what angsty, attention-seeking teenagers sometimes do.

And occasionally they shoot people. The Dirties can be a very funny movie, but it doesn't let us forget that.

Verdict: 16/20. If nothing else, see it for the end credits, a mashup of some of the most famous opening credits in history. It's the perfect expression of Matt's movie-fixated determination to turn his own story into an all-encompassing epic.

This Week in Your Living Room
Hercules, Land Ho!, Maleficent, A Most Wanted Man, Plane: Fire and Rescue, Step Up All In.