When Rango came out a few years ago, my friend Pam and I saw it independently and compared notes afterward. We were both surprised by how we liked it. She remarked (and I'm paraphrasing here), "Yeah, who woulda thought that the schmuck who made those stupid Pirates of the Caribbean movies had something like this in him?"

I felt the same. The Pirates movies are, in my opinion, pretty dumb: big, needlessly complicated and bursting with messy and overwrought computer animation. Even the great Bill Nighy couldn't redeem those movies for me. But Rango is smart, funny and exceedingly enjoyable. Not long after seeing it in the theater (which, memorably, had a leak in its roof — a hilarious coincidence, given that the film's story revolves around water), I purchased the film on Blu-Ray, and have watched it several times since.

I don't own too many Blu-Rays; unless I find them used/cheap, I tend to stick with DVDs when I decide I need to own a film on a physical medium. I have nothing against them and am pleased to see films in the highest possible resolution on my decent television. But I won't go out of my way to seek them out, and have only replaced a couple of my old DVDs with higher-res Blu-Rays. Rango, though, was worth the investment.

The thing I like most about Rango, even more than its clever co-opting of the narrative and visual language of spaghetti westerns, is its celebration of texture. I mean that literally: The varied and finely crafted surface textures in this film are sumptuous.

The story is set in a world of talking desert animals, giving Rango's animators many chances to outdo themselves in depicting such textural elements as rabbit fur, horned-toad scales and owl feathers. The remarkable detail in these images — which are rendered all the more clearly on Blu-Ray — is absolutely stunning on at least two levels. Though I'm not a naturalist, I feel comfortable calling these textures "photorealistic," as they seem to have life flowing beneath them. ("Animation" means, after all, "to give life to.") More than that, these scales and tufts are stunning aesthetically, regardless of how well they refer to their real-world counterparts.

Just look at the way the digital light glints off the dusty scales of Bad Bill, the Ray Winstone-voiced gila monster (or whatever the hell he is). You can see the scales' relative degrees of protrusion, their matte finish, the way they fold and ripple on his chest. Look at the cracks in the dusty leather of his suspenders, and the way the inner corners of the character's eyes enhance his scowling meanness.

I'm similarly taken with the remarkably fine detail on the feathers of the owl troubadours, and the way the one owl's violin is given just the right polish: The instrument looks weather-beaten yet musically sound. 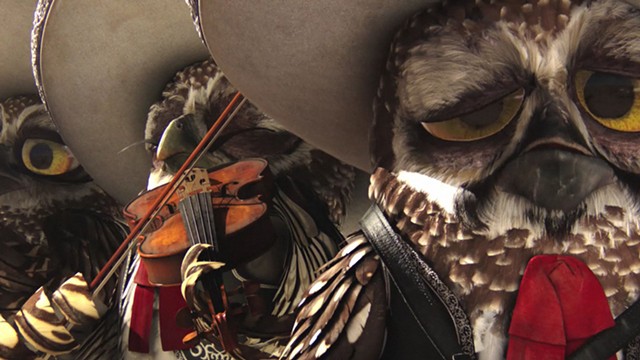 The image that especially struck me on this viewing was the bottle of "cactus juice" that Rango clutches in a saloon. The texture is so detailed and precise, I know from a glance that it's firm yet yields to gentle pressure, like the succulent leaves to which it refers.

I can also gauge the density of the putative material from its edge translucence. This object is so well animated and textured that I have a good sense of its haptic properties. That's no small achievement, even for skilled animators working in high-res digital.

This kind of thing makes me glad I sprang for the Blu-Ray — and it's exactly what the medium, with a resolution of 1080p, was designed for. I wouldn't surprise me to learn that Paramount Pictures made Rango precisely to demonstrate Blu-Ray's resolution.

As more and more movie theaters convert to 4K projection, and as 4K TVs slowly gain market share, it's worth considering what we gain when we watch a film in higher (and higher) resolution.

The most obvious answer is that we gain visual detail, but that just raises the question, why is detail so important to the viewing experience? Because it allows us to better appreciate image designs and compositions, especially in an era when images are mostly designed on a pixel-by-pixel basis. In that high-res allows us to see the images as the filmmakers intended, it's highly valuable.

Most people watch movies to engage in their stories, though. And while we may choose a beautiful, high-resolution image over a so-so, lo-res one, there's more to consider here. Images tell stories because film is a visual medium. To see a film in the highest possible resolution is to gain unfettered access to the elements of its visual storytelling.

For example, in the shot of Rango holding the bottle of cactus juice, a higher resolution sharpens focus on several key story elements: the strangeness of the bottle's texture, and, thereby, the way it emphasizes Rango's "fish out of water" status; the color, lighting and texture that visually liken the bottle to Rango himself, thus again emphasizing how out of place both things are; the beautiful background lighting that underscores this moment of epiphany for Rango; and the subtleties of the character's expression, which convey his befuddlement.

In short, a higher resolution conveys story information more clearly precisely because it is literally clearer.

Though you'd have to pry my Rango Blu-Ray from my cold, dead hands, I still strongly prefer film over digital, for the simple reason that film has a higher resolution. The basic unit of digital cinema is the pixel; the basic unit of analog cinema is the molecule of, most commonly, silver bromide or silver chloride. Until digital technology improves by an order or two of magnitude, molecules are going to be smaller than pixels. And the smaller your basic unit, the more of them you can fit into a finite space. Hence the higher resolution.