What I'm Watching: The Adventures of Buckaroo Banzai Across the 8th Dimension | Live Culture

What I'm Watching: The Adventures of Buckaroo Banzai Across the 8th Dimension

What makes a film a cult film?

I struggled with this question when I wrote a short book on the film This Is Spinal Tap, because that movie didn't seem to jibe with any of the prevailing theories about the nature of film cultishness. It isn't beloved by only a small, devoted audience; it doesn't contain esoterica graspable only by those "in the know"; it is certainly not "so bad, it's good"; it does not court controversy; it is not a "lost treasure," rediscovered by fans after failing to receive its due in its original release. But I think few film lovers would deny that This Is Spinal Tap is indeed a cult film.

Ultimately, I concluded, rather plainly, that a cult film is simply one that, for any number of reasons, attracts a devoted following. Furthermore, the term "cult" implies no particular scale: A film's cult may be small (like that of, say, the oddball semi-satire The Wizard of Speed and Time) or large (I see no reason why we can't call films in the Star Wars series "cult films"; same for The Lord of the Rings movies, and even for beloved classics like Casablanca). All of these films have inspired devotion in a certain segment of their audiences in ways that movies such as, say, 27 Dresses and Shooter do not. Cult films, it seems to me, can achieve that status in any number of ways. If they strike the right note with their audiences, they're in the club.

A few weeks ago, I saw, for the first time since approximately 1990, one of the definitive cult films of the 1980s: The Adventures of Buckaroo Banzai Across the 8th Dimension. This film, in a word, sucks. I thought so when I was in high school and I still think so now. That is not, in itself, a problem for its cult status, as there are lots of sucky films that have achieved that mantle: the oft-trotted-out Plan 9 from Outer Space, the MST3K-bolstered Manos: The Hands of Fate, the marvelously daft Troll 2. The weird thing about the cult of Buckaroo Banzai is that the members of that cult seem to me to have granted the film cult status for all the wrong reasons. 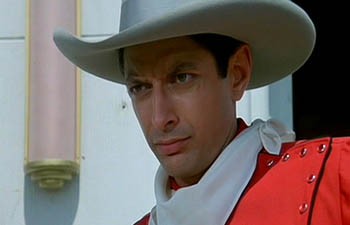 To put it plainly, the film assumes a breeziness and (for want of a better term) coolness that it simply doesn't earn. A few inspired performances (notably that of John Lithgow) and oddball jokes (the surnames of the many characters named "John," mostly) do not compensate for the film's lack of coherence, its rambling incomprehensibility and its many inconsistencies. Overall, the film possesses only the minutest amount of the cleverness that it purports to contain.

Not to mention that the film does not use cinematic style in any particularly inventive manner. I noted not a single cut, camera placement, camera movement or soundtrack choice that was anything other than functional. The style contributes nothing to the film whatsoever, merely delivering story information without adding any sort of artistically worthwhile value. And when that story information is itself impossible to parse (not because it's "deep" but because it's deployed with incompetence), it's a bit of a double-whammy.

The weird thing is that the members of Buckaroo Banzai's cult celebrate the film for its putative greatness. Seems to me that, if it is to be granted cult status, it belongs in the "so bad, it's good" category. Beyond Lithgow's unhinged performance and the enjoyable closing credits (which are nevertheless marred by incompetent camerawork), I find little in this film that was pulled off with any skill. I'd argue that it's far more incompetently made than Plan 9, long regarded as "the worst film of all time."
I realize that this is all opinion, not fact, but I think it's nevertheless worthwhile to consider the reasons that Buckaroo Banzai has been granted "positive" rather than "negative" cult status.

One possible reason is that the film is an underdog of sorts. Famously, Buckaroo Banzai was released indifferently by its studio, MGM, premiering in a small number of theaters at the very moment the politically controversial 1984 Summer Olympics commenced. Reviews were mostly pretty tepid, but there was enough weirdness in the film to inspire some of its fans to rally behind it, proclaiming loudly that Buckaroo had not been fairly treated by its studio. Everybody likes a lost cause.

That "weirdness" — a hero who's a scientist and a rock star, Rastafarian aliens, nutty character names — does indeed distinguish Buckaroo Banzai from other films, mostly because its weird bits are deployed with such randomness. That "you never know what's coming next" approach has a certain appeal, I'll admit.

I think that the chief reason for the cult status of Buckaroo Banzai has to do with a historical coincidence. The film was made in 1984, one of the golden ages of home video and cable television. Soon after its release, it wound up as a mainstay at video stores and on late-night cable, at precisely the moment when impressionable kids of about my age (12 at the time) had their first taste of unfettered access to movies that were not intended for their parents. The disjunctive sci-fi "oddness" of the film appeals, I would submit, primarily to teenage boys, who I believe were the founding members of this film's cult.

Moreover, the film presented itself to these boys at a highly impressionable moment: Their own tastes in music and movies were just congealing. As Daniel Levitin has argued in his books about human beings' deep neurological connections to music, the artworks that we admire at the age of about 13 have a tendency to form the basis of our overall artistic preferences. Even if we don't listen to it much anymore, we'll always have a soft spot for the album that was our favorite when we were 13 or 14. Same thing with movies, and all the more so when we can claim them, for reasons of their oddness or difference, as our own.

Teenage boys, as is well known, can yell pretty loudly, and often succeed in imposing their opinions on others. It's my hypothesis that the initial fans of this film yelled pretty loudly, and thereby set the tone for the cult status of Buckaroo Banzai. And once a film gains a reputation as a cult film, it's pretty hard to shake. So even though, in my opinion, The Adventures of Buckaroo Banzai Across the 8th Dimension is worthy only of "negative" cult status, it remains beloved by its many fans.

As for me, I'm done with it. Life's too short for crappy movies, even if they do have John Lithgow in them.