Steel Cut Theatre and Dance Deliberation Put on The Show 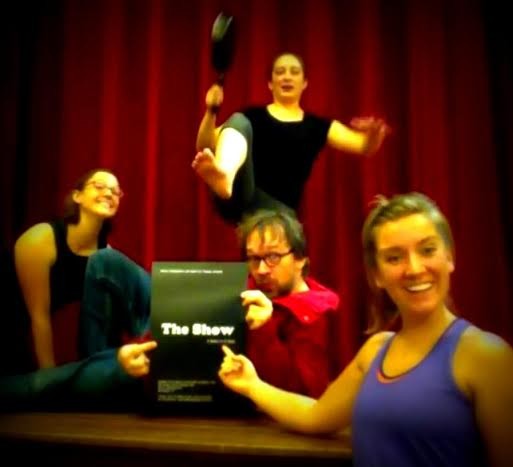 There's a modern dance show coming to Burlington performing arts venue Off Center for the Dramatic Arts this Friday and Saturday. And not just any show. The Show.

Choreographed and performed by James Moore and Frankie Binder, the couple behind Steel Cut Theatre, in collaboration with Kelsey Wilson and Annie Brady of the newly christened local dance duo Dance Deliberation, The Show is a 70-minute movement arts production with 14 original choreographed dances and maybe a hidden "bonus track." Two of those dances are presented through video.

The four performers first collaborated during an Eat My Art Out event last year. Buoyed by positive audience feedback, they've been preparing The Show's eclectic, zany and occasionally serious movement pieces for months.

"We are interested in using movement to push through the mundane to find something real and true, sometimes serious, sometimes silly," writes Moore in the event's press release. "We find inspiration in music and have been exploring ways to support or actively fight against certain songs."

Beyond that, leave any preconceived expectations by the wayside. "There are dances that are more serious, and there are dances that invite you to laugh," Moore says. "We want to keep everyone entertained, and if you don’t like something, don’t worry, it won’t be there very long!"

If nothing else, the show promises to appeal to a wide crowd: Moore says raincoats, hand puppets, exercise videos and frying pans will crop up during the evening. He says that the styles of Merce Cunningham, John Cage and Anne Bogart influenced the artists. While Wilson and Brady are classically trained dancers, Moore and Binder are newcomers to the form — and all four are prepared to find humor in it.

"We like the kind of dancing you do, like, in the car, that no one should ever see and if they do you get embarrassed," Moore says. "We're trying not to be too precious."

The Show's performers hope to tap audience members from Steel Cut's previous productions and the Off Center's theater-going crowd, plus Wilson and Brady's local dance network.

"I’m hoping that the people who are really into modern dance will love [The Show] for a completely different reason than the people who think they hate modern dance," Moore says. "We hope it can attract those people with its playful nature."

How will they get modern dance haters through the door?

Pressure Cooker: The Impacts of COVID-19 on Restaurant Workers