This week in movies you missed: WTF did I just watch, and can I watch it again?

Director Joseph Kahn's little-seen 2011 horror comedy is the film Easy A should have been. Namely, a self-referential high school flick that takes the genre to the limit and drops it off a cliff, then stands and watches gleefully as it explodes into candy-colored smithereens.

The resident queen bee of Grizzly Lake High (Alison Woods) rises from her bed and lectures the camera on the art of being popular, Ferris Bueller-style. No sooner has she explained the day's fashion statement ("The '90s are the new '80s") than a knife-wielding maniac dressed like the villain of the Cinderhella film series appears and puts a merciful (for us) end to her existence.


Meanwhile, in another bedroom, misfit Riley Jones (Shanley Caswell) is considering suicide. Her former BFF (Spencer Locke) has morphed into an evil cheerleader and stolen her secret crush (Josh Hutcherson, who got a huge career boost from The Hunger Games shortly after this was released). The school's resident geek (Aaron David Johnson) won't stop propositioning Riley; and the only person less cool than she is is the girl who committed an unspeakable act on the school's resident stuffed grizzly bear in 1992.

I've just described the film's first 10 minutes, tops. The plot spins out of control as we meet more dramatis personae: the vengeful nerd principal (Dane Cook); the pissed-off quarterback (Parker Bagley), who hides a dark secret; a goth girl; a geek named Toshiba; Ione's cougar mom; the guy (Walter Perez) who's been in detention for literally decades; and, of course, the killer hiding behind Cinderhella's bloody prom dress.

Box Office Mojo offers no data on Detention, but I can tell you it didn't get near Vermont multiplexes. Netflix Instant offers it to the curious.

Tomorrow, when my colleague Ethan de Seife writes about Kahn's other feature, Torque, in his What I'm Watching column, he'll give you a rundown on the director's background in music videos. My personal favorite is the torrid melodrama of Megan Fox and Dominic Monaghan playing house (and burning it down) in Eminem's "Love the Way You Lie."

Many critics seemed to think so. This is one of those films that whirls viewers relentlessly like a carnival ride, leaving its Metacritic page streaked with cleverness and bile. Here are some choice bits:

It's an ice-cream headache of a movie-movie that's so relentlessly "fun," it's borderline obnoxious.
Nathan Rabin, the A.V. Club

Everyone on the set must have been chugging Mountain Dew between takes.
Peter Hartlaub, San Francisco Chronicle

It's one of the most obnoxious movies ever made.
Nick Pinkerton, the Village Voice


Now here's a relevant quote from Ethan's review of Torque:

Forget about the story — that's the least interesting thing about this film. Just sit back and let its crazy, ultrastylized visuals scrub out your eyeballs.


I'm not someone who can forget about the story. Films are not primarily visual artifacts for me; they are narratives that unfold in visual and verbal terms. I care a lot about coherent story and character arcs, and I even place value on a film's power to reflect and illuminate certain aspects of reality.

But sometimes I still enjoy movies that have cardboard characters, insane plots and zero interest in reality. Detention is one of those movies.

I submit that this is not a movie whose story you should ignore in favor of its visuals, exhaustingly attention-grabbing as those are. On the contrary, you should watch Detention precisely as a storytelling exercise in which Kahn takes every iconic teen flick of the past 30 years or so (The Breakfast Club, Back to the Future, Ferris Bueller's Day Off, Donnie Darko), puts them in a Cuisinart with some horror (The Fly, the Saw series, Scream, Carrie), chops them all into tiny bits, and then reassembles them as a collage that moves at 120 mph. (Even the opening credits are a thing of beauty.)

But, really, the folks over at TV Tropes said it all better than I could.

Satirizing two particularly trope-ridden genres isn't a new idea. Teen movies were already growing painfully arch and self-referential by the time Heathers appeared in 1988. As for slasher movies, Scream had their number in '96.

One way to do something fresh with parody is to graft it to a larger, dead-serious narrative. In The Cabin in the Woods, for instance, Joss Whedon invented a logical (if fantastical) backstory to "explain" the illogical conventions of a horror subgenre. His characters were real people trapped in the skins of archetypes, desperate to escape and assert their autonomy.

Kahn's approach is a different one, seemingly designed to reflect a world where most teenagers watch movies while gabbing on the phone and consulting their iPads. Rather than deepening a single satire, he stages a few dozen of them simultaneously, interweaving them in increasingly outlandish ways until the whole thing goes boom. 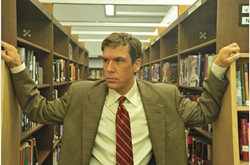 I can't say Detention taught me anything I didn't already know about the teen flick, nor did it make me give a damn about its characters. Unlike Richard Kelly, who made Southland Tales (another favorite WTF movie of mine), Kahn doesn't seem to have any delusions about his own degree of profundity — nor should he.

But for demonstrating the sheer quantity of cultural detritus you can jam into a film and still give it a propulsive narrative, Detention deserves to be a cult classic, renowned far and wide as the movie that finally killed the high school movie. (Never mind that the zombified genre will probably shamble on for decades.) Let's start the campaign now!

Verdict: Crack open those Mountain Dews; bring on the ice cream headache. To a critic encountering it in a theatrical setting, Detention might have been too much of a muchness. As a wacko Netflix find, it's just right.

David Fincher directed the adaptation of best-seller Gone Girl. The evil doll from The Conjuring returns in Annabelle. Nicolas Cage is Left Behind in a reboot of the Christian series.

At the Roxy only: The Disappearance of Eleanor Rigby: Them tells the story of a breakup. Maggie Smith shows Kevin Kline her curmudgeonly charms in My Old Lady.