Discovery Channel's 'How It's Made' Features Danforth Pewter | Live Culture

Discovery Channel's 'How It's Made' Features Danforth Pewter 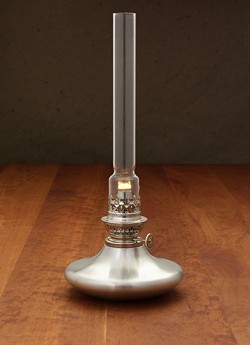 Danforth Pewter's iconic oil lamps are produced in batches of one or two dozen during a daylong metalworking process. But that, says owner Fred Danforth, who revived his family's centuries-old pewter business in 1975, is somewhat misleading.

"My flippant answer, when someone asks how long it takes to make one, is 30 years!" jokes Danforth. "Because that's how long it took me to really get down all of the techniques."

Visitors to the Danforth Pewter Workshop & Store on Seymour Street in Middlebury have long been able to see those lamps and other products in various stages of production. Two windows in the company's headquarters offer a peek into the workroom, where craftspeople work during business hours.

Today, October 3, television audiences also have the opportunity to see Danforth's craft in action: A segment of "How It's Made," a popular show on Discovery's Science Channel, is dedicated to the making of a Danforth oil lamp. The episode initially airs at 10:30 p.m. Eastern time, then again at 1:30 a.m. on October 4.

"How It's Made" delves into the nuts and bolts of how everyday objects are made. Yesterday's episodes, for instance, featured segments on surfboards, sandwich cookies, industrial wire rope, beet sugar and turbochargers, among other things.

Danforth initially reached out to the "How It's Made" producers at a customer's suggestion, but "didn't truly expect to hear back," he says.

To his pleasant surprise, the company's long history and the viewer-friendly nature of the lamp-making process were appealing to the show's producers. So last winter, a four-person production crew from the Discovery Channel joined Danforth in his Middlebury workshop.

During a 12-hour shoot, he created the oil lamp while the crew filmed, sometimes repeating steps depending on their needs. The final segment is just about five minutes long.

"It's very focused on the technique itself, which is what their whole style is," notes Danforth, who collaborated with the show's producers on the script after filming.

And though the company makes a wide range of handcrafted pewter products, Danforth considers the oil lamp he created for the show his "signature piece."

"It's one of the most popular pieces we make," he says.

Catch the segment on television — or, as Danforth suggests, stop by the company's flagship store and see the process in person next time you're in Middlebury.