One of the reasons I return again and again to Paul Verhoeven's sci-fi satire RoboCop is that the film masterfully balances bleak satire, ultraviolence and goofball humor — three flavors that, if mixed by less talented hands, might not have combined quite so well. I've seen this movie (the 1987 original; I have little truck with its sequels, and have not seen the 2014 remake) many times, but that's never stopped me from revisiting it, which I did last week.

RoboCop just looks more and more prescient every year: Its bitter commentary on the militarization of urban police forces couldn't help but evoke recent events in Ferguson, Mo. Good satire endures, and RoboCop, to my eyes, remains entirely fresh. I didn't understand in 1987, and don't understand now, how some viewers can fail to take note of the film's social satire, but evidently this misapprehension persists. It's not hard to track down reviewers who take high-and-mighty moral stances about the film's famously over-the-top violence, and therefore condemn the film as a whole. Context, people. Context.

The scene that struck me most powerfully this time around was the one in which the title character is "reborn" as a cyborg crimefighter. A little plot summary is in order: In a futuristic Detroit, violent crime runs rampant. A private corporation, OCP, is now running that city's beleaguered police department as a for-profit entity. When OCP's ED-209 robotic law enforcement program fails violently, a young exec pushes forth his own idea: Half-man, half-machine police officers. They can walk and talk like human beings, but their brains and strength exceed all human achievements. And, what's more, with only basic nutrients and a charge of their batteries, they can be out on the streets 24/7. Crime rates drop as the corporation turns a profit. 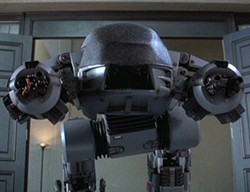 Caught in the middle of this is the unwilling volunteer who's first turned into a cyborg. Gunned down brutally by gangsters, Officer Alex Murphy holds on to the barest shred of life, only to be reborn as a part-man, part-robot, the likes of which the world has never seen.

The moment at which Murphy/RoboCop reawakens is perhaps the single most important scene in the film, and director Verhoeven underscores that by shooting it in a way that distinguishes it from most of the preceding scenes. Verhoeven simulates Murphy's optical point of view in a series of short scenes that accomplish several goals.

First, they convey to viewers the foreignness of the experience of dying a human and being reborn a cyborg. Second, they fundamentally humanize the main character, ironic as that may sound. Finally, these short POV scenes are a focal point for the blending of tones that I refer to above: They're bleak, funny and weird, and they suggest an entirely new direction for the film's narrative.

Just before he apparently dies, Murphy's visions unfold for the viewer, interspersed with POV shots of the doctors who are trying to revive him. We, and Murphy, see memories of his wife, his son, his home. We also see, from his optical perspective, images of the men who killed him. As Murphy expires, the screen goes black, and stays that way for several seconds.

The next image we see is that of a staticky television monitor struggling to lock on a picture. Technicians make adjustments, but then the image fades out. It's quite disorienting. Then a green grid drops down over the field of vision, locked into place by one of the technicians. It's worth noting that it's not exactly a surprise that Murphy is reborn as a cyborg — it's right there in the movie's title. It's not the what but the how that Verhoeven handles so well here.

The next vignette continues doling out limited quantities of information. Murphy's left arm, which technicians were able to preserve, will be replaced, after a complex operation, by a robotic arm; Murphy's memory will be "blanked" before he's activated. The next shows us the workings of his robotic arm and then, after another brief blackout, we see a very interesting scene: Drunken revelers in lab coats blow on noisemakers, and the camera pans right to follow their movements. This is the first time in this series of mini-scenes that the camera moves, and it indicates that RoboCop is now semi-autonomous. Further, it suggests that he's interested in human activity — an interest that one of the revelers promptly mocks by planting on his view-screen a big, wet, lipsticked kiss. That's as close as Murphy will ever get to human love, but that doesn't mean he's not still at least part human.

The final vignette depicts the cyborg's formal unveiling. The OCP exec rattles on about the benefits of the project, and we (like Murphy himself) see this event though the thick sheet of semitransparent plastic that's draped over him. The camera, still simulating Murphy's POV, rises from the chair and walks forward through a throng of clapping admirers. "That's for you," says Bob Morton, the OCP stuffed suit. As the camera tracks forward, we see the clappers' admiration and slight fear as they gaze upon something strange and unpredictable. We also get our first glimpse of RoboCop himself, not in a mirror but on a small TV monitor that displays the view from a camera trained on him.

This last bit is a very nice touch, as Verhoeven delays the formal, "third person" revelation of RoboCop until the very last moment, and does so via an electronic device, thereby further stressing the man/machine divide. The scene ends without a "proper" shot of the hero — that'll have to wait for the next scene, in which RoboCop is brought into a downtown precinct office. (And, in that scene, Verhoeven stretches out the tension even further, as we see RoboCop through frosted glass, and then only from behind, before having to wait another short while for a frontal view.)

It's a very clever series of mini-scenes, which may be viewed as either the "booting up" of a computer or the awakening of a human being. In this instance, these are the same thing, and by placing us in the optical perspective of the title character, Verhoeven encourages us to see familiar events in an unfamiliar way.

My favorite part of this whole section comes in its last shot, in which the POV camera walks through the throng of clapping functionaries. At one point, a character named Johnson (Morton's chief lackey) leans into the frame (that is, he leans out in front of the ambulatory cyborg) to say smilingly, "Go, Robo!" 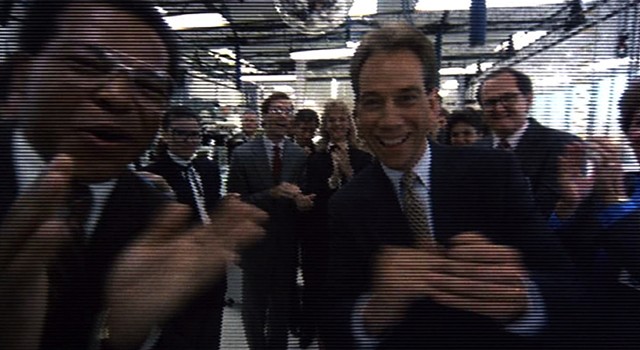 On the surface, this is just a moment of goofy enthusiasm from a yes-man. But I think it's actually more complicated than that. It's such a dumb, schoolyard thing to say that it actually undercuts the importance of the event, which is nothing less than the creation of the world's first cyborg — and a crimefighting one, at that. Johnson is like a kid who claps for his favorite baseball player, thereby reducing RoboCop to the kind of quasi-superhero that kids admire.

(Indeed, the film makes several parallels between Murphy/RoboCop and "T.J. Lazer," the hero of a dopey crime TV show that Murphy's son loves.)

At the same time, though, Johnson's goofy encouragement effectively humanizes the cyborg, as if he were actually an athlete to be cheered on. The problem, of course, is that even though RoboCop may be fighting on the "right" side of the law, he's still a brutal killing machine. And, as the film later reveals, OCP is not exactly dedicated to the civic good. RoboCop has been deliberately crippled: He's unable to arrest any OCP employee, even if he or she is guilty of a crime.

To me, "Go, Robo!" — and the scene in which that line is couched — is the perfect crystallization of the film's subversively dark comedy. And, ultimately, it's RoboCop's trenchant satire that encourages me to return to it so often.