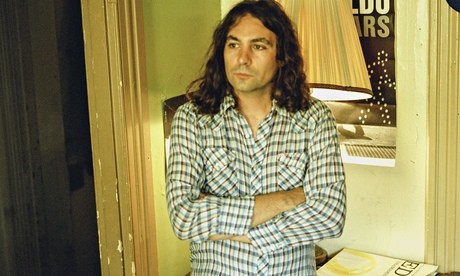 Lost in the Dream, the third album from Philly-based rockers the War on Drugs, released earlier this year, was born out of an emotionally dark period for front man and songwriter Adam Granduciel. Though rooted in isolation, heartache and questions of personal identity, Granduciel's plainspoken soul searching is wrapped in a warm, multilayered blanket of sound that is anything but dreary. Lost in the Dream is as uplifting as it is emotionally raw.

Seven Days recently spoke with Granduciel by phone in advance of the War on Drugs' appearance at the Grand Point North music festival at Burlington's Waterfront Park this Saturday, September 13.

SEVEN DAYS: Were you as annoyed as I was to find a new U2 album in your iTunes library yesterday morning?
ADAM GRANDUCIEL: Is it in there? Lemme look at that. If it's in there I'm gonna fucking freak. [Checks his iTunes] Nope. I don't think it's there.

SD: Lucky you. Pretty much everyone else on the planet got it, whether they wanted it or not.
AG: I also haven't updated my iTunes in a while. Is it any good?

SD: It's a piece of crap.
AG: What's the name of it, Songs of Innocence? What does that even mean? I wanna see that fucking email chain, between, like, Bono, Edge and Adam Clayton — sometimes they forget to put Adam on — and like 57 million other people about the name of the record. Here it is, guys: Songs of Innocence!

SD: The first song is about Joey Ramone…
AG: I'm sure it is. But good for Bono. I don't have anything against U2. They were a big part of my musical upbringing. I just don't like that they're infiltrating people's iTunes. Come on, dude. I don't want to get all political, but are the iPhones not made in China by children? I mean, I guess you can still feed the hungry children and pimp the iPhone 6 … I mean, I use the fucking thing. But I'm not putting my record in people's iTunes.

SD: Nope. Your record is in my iTunes voluntarily.
AG: Nice!

SD: Speaking of which, the narrative surrounding the album has become centered on the emotional struggles you went through while writing it, which you've been very open about. But to me, while it comes from a dark place, the record has a more uplifting quality than it's usually credited with.
AG: For sure. I would never say it's a dark record. I was in a shitty place and I was making music and referencing things I was dealing with. But I enjoy making uplifting music. I like pop music. I like that fucking sound. I don't know if I was searching for that as much as it's just the sound I like.

SD: You had an interesting line in a Vogue interview about how, while you were writing about dark things in your own life, you were really writing about the act of writing. That tells me the real theme of the record is communication.
AG: I'd say that's right. It's about how we communicate, how we connect with other people. How do you communicate with a loved one, a boyfriend or a girlfriend? How do you communicate with yourself and the things you want out of your life?

SD: Well put. For the first time in your life, music has become your day job. Is that a hard thing to get your head around?
AG: It's great. It took a while for me to realize that talking about your music and defending it in the business sense in the music world, or involving myself in it 100 percent in my day-to-day life isn't selling out. It's actually the only way you can experience your music in another way. Because if I disconnect myself from everything except the recording, the music itself, what's the point of putting it out there? What's the point of caring?

Involving myself more in the career-ness of this being my job, I've had to take way more of a leadership role in making sure the opportunities we get, the way the band is perceived, what we're asked to do are actually what we want to do. That's taken a while to understand how to navigate. And sometimes you feel like a chump. And sometimes you feel like you made a good decision. But it's all part of having a little business, a small company, which is really what it is.

Even saying something like that years ago would have freaked my out. But you make this thing and you stand behind it. None of us are anarchists, and we all need a little bit of money to live our lives. So it's not unartistic to think about the business side of being a touring musician.

SD: So you're saying you won't be hawking the iPhone 7?
AG: I didn't say that! I don't want to throw anything out with the garbage. But I probably won't be.