I've always been drawn to films that impose limits on themselves, either stylistically or narratively. Alexander Sokurov's Russian Ark is so exhilarating precisely because it has no edits at all. Part of the great success of Die Hard rests on the fact that it's mostly confined to a single location. (Upon visiting a friend in Los Angeles some 15 years ago, he took me right from the airport to a seemingly anonymous building in Century City, which turned out to be the Nakatomi Plaza, aka the corporate offices of Die Hard's studio, 20th Century Fox. I've seen Die Hard probably 30 times, so this was quite the thrill.)

I recently rewatched another film that benefits from the same kinds of limits that Die Hard uses. Wolfgang Petersen's 1981 film Das Boot (The Boat) is set chiefly in a physical space far smaller than that of the many-storied Nakatomi Plaza: a submarine. I'm not saying anything new in remarking that the intensely claustrophobic atmosphere of this film is its most noteworthy attribute. But I was pleased at how intense the 30-year-old film remains 10 years after I saw it.

Not long ago, I happened to take a tour of a World War II-era submarine in Groton, Conn., that had been turned into a museum exhibit. After proceeding down the central hallway, I naïvely asked my stepfather, "OK, where's the door to the other hallway? I want to see the other side, too." Nope, he informed me: This was it. One underwater tube, one hallway, and unavoidable, intense claustrophobia. These are seriously confined vessels.

So it's remarkable to me not only that people lived and worked on submarines, but that they didn't all go completely insane. The set design and cinematography of Das Boot emphasizes the crazy-making properties of the vessel. Though not shot on an actual submarine, the inside scenes were filmed in a mockup of a real German U-boat built to precise specifications.

In the film's many moments of panic, the camera races through the sub's central passageway, the speed of its movement emphasizing the chaos on board. These shots, which were accomplished with a specially built gyroscopic mount worn by cinematographer Jost Vacano, were breathtaking for me. They offer such strong contrasts — in speed, in fluidity, in excitement — to the great bulk of the film's shots that they can startle and even shock. I was not the only one to gasp at these moments. My wife, who was reluctant to watch a four-hour war movie with subtitles, had the same reaction.

Das Boot, then, makes excellent use of contrast in art. These rapid shots down the sub's passageway are exciting in part because of the thrilling speed and viewpoint offered by the camera. But just as much (even more, I'd argue) because they are so strikingly different from the rest of the film. The great majority of them are shorter, less fluid (or entirely stationary), and crammed to the gills with people and machinery. The contents of the images in the gyroscopic shots "refresh" themselves almost instantaneously, thereby creating powerful visual variety.

The film uses the power of contrast on a larger scale, as well. At carefully chosen intervals, Petersen allows us outside the claustrophobic central tube of the U-boat. Quite a few scenes occur on the conning tower, so a select few of the soldiers (and we) can get a breath of fresh air. More importantly, a scene fairly late in the film takes place in a luxurious portside restaurant, where German officials welcome some of the sub's crew, who've put in to pick up supplies. In this scene, the contrast is especially stark. The restaurant is colorful (as opposed to the steely grays and blues of the sub's interior), well lit (which the sub is not) and, most importantly, has an open floor in which people can move about freely.

However, in both the conning-tower and restaurant scenes, the contrast is ironic. On the tower, the sea is almost always in turmoil, buffeting the soldiers with ferocious waves. They might be breathing fresh air, but their lungs are also taking in a lot of water. And surfacing for even a moment is a dangerous prospect for a warboat in heavily patrolled seas. 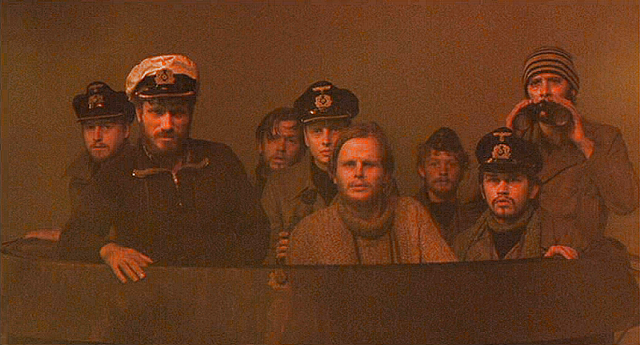 The restaurant scene's contrast is even more ironic. The crew's hosts are unctuous and fawning, well groomed and officious. These are smarmy, pampered bureaucrats who are doing little for the German war effort yet are amply rewarded for it — the exact opposite of the sub crew. Also, this brief pitstop in a safe harbor only underscores the difficulties of the sub's mission, which involves passing through the narrow, heavily guarded Strait of Gibraltar.

The film's opening titles alert us to an even bigger issue: At the historical moment depicted in the film, the tide of the war is turning against the Germans. A sense of doom thus hangs over the whole story — and comes home to roost when, shortly after the sub docks for repairs, the German base is bombed by the RAF and nearly every soldier on the boat is killed. The soldiers would have been better off inside their claustrophobic sub out in the depths of the open sea. There may be luxe restaurants on the surface, but such locations foretell a grim future for the crew of the sub.

The notion of contrast — considered more broadly, the notion of patterns and the ruptures thereof — underpins our understanding of all art. It's how we distinguish verse from chorus, Act I from Act 2, hallway from parlor. Film offers many opportunities for contrast: shot duration, lighting, camera movement, location, actors' appearances, color — the list is endless. In famously creating a mood of extreme tension and excitement, Petersen shows himself a master of the art of using contrast for narrative purposes, some of which are all the more powerful for being grimly ironic.