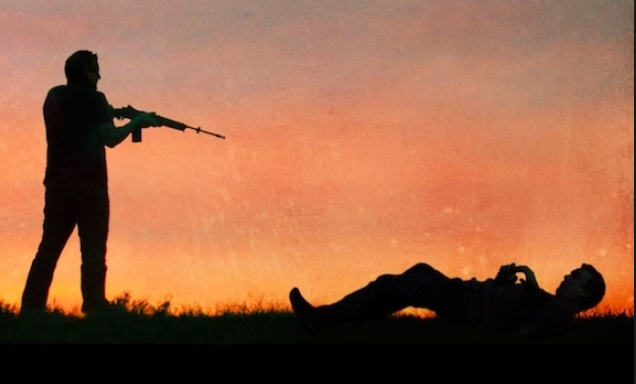 This week in movies you missed: They say revenge is a dish best served cold.

What happens when you warm up revenge in the microwave, accidentally drop it on the floor, scrape it up and serve it anyway?

Possibly something like the plot of this wonderful offbeat thriller from writer-director-DP Jeremy Saulnier, which recalls the early days of the Coen brothers.

Dwight (Macon Blair) lives out of his car, spending his days on the beach and his nights Dumpster diving at the fun fair.

Until a cop contacts him with news: Back home in Virginia, the man who killed Dwight's parents is about to be released from prison.

Dwight gets in his blue ruin of a Pontiac and heads home. He doesn't have a gun or money to buy one; he's not even sure how to use one. But he does have a knife. And a will to see his version of justice done.

Turns out Dwight's not up against one man; he's up against a family. And the consequences of his revenge will be messier than he ever imagined.

Partially funded by Kickstarter, Blue Ruin won a prize at the 2013 Cannes Directors' Fortnight, and numerous other fest honors. It reached 61 U.S. theaters, none here (to my knowledge), and is now on video and Netflix and Amazon Instant.

Short answer: no. I heard great things about this movie, and it didn't disappoint.

My 20-point, highly scientific scale for the assessment of indie films.

1-4 points: Does it look pretty?
4/4. Director Saulnier has a longer track record as a cinematographer (a role he also filled here), so yes, it does. I'm not normally someone who drools over or even necessarily notices particular shots in a film, being more narrative focused. But this one has a shot near the beginning, of the lights of the fun fair glimpsed over a roof, that I want on a poster.

The shooting serves the narrative, too: Saulnier stays very close to Dwight's perspective, sometimes right over his shoulder, emphasizing how limited his knowledge is. When he goes to a long shot of Dwight in his (unforgiving) environment, there's often a palpable sense of tragedy.

1-4 points: Does anything happen?
4/4. Some may find the first half hour slow; Dwight barely speaks during this time. (But that's important. When he finally engages in conversation, he admits he's out of practice.) It's his obvious sense of purpose, conveyed nonverbally, that keeps us watching until the shit starts hitting the fan.

Even then, Blue Ruin isn't a movie for action junkies, but it's beautifully paced. Every explosion of violence has a build-up, an impact, consequences, a cool down.

In my opinion, it's what more action movies should be, with violence happening on an all-too-human level. No one pulls out martial arts moves; no one commits superhuman feats of endurance. No one gets a crossbow bolt in the leg and just yanks it out and goes on with his business. Wounds hurt in this movie.

1-4 points: Does what happens make sense?
4/4. I've been reading a book called Pitiful Criminals, by Vermont author Greg Bottoms, that retells (with fictional license) some sordid stories of Southern crime. It's a sad, sometimes darkly funny reminder that not all crimes (or even most) are committed by the "masterminds" we typically see in crime fiction. So many real murders are messy, ugly, poorly thought out, and profit exactly no one.

Dwight could be one of Bottoms' pitiful criminals. Everything he does and suffers makes sense, even as it sometimes becomes borderline absurd. (Ever tried shooting a redneck in a car trunk only to have him mock your poor aim?) That's where the Coen brothers element comes in.

1-4 points: Do the characters seem like real people? Failing that, do they look pretty?
4/4. The script doesn't offer a ton of characterization, but that's why acting matters. Blair keeps us connected to Dwight through his wide, incongruously gentle eyes. For a while, we don't know why he's doing what he's doing, but we do know that he's no tough guy, and that we don't want to see him get hurt.

Many, many movies have revolved around a silent, charismatic tough guy seeking vengeance. Dwight is not a violent man, but he has violent needs, and that's what makes this film both original and fascinating.

While the murderer's family could easily have embodied the Redneck Clan From Hell trope (Crossbow? Check. House full 'o guns in the boonies? Check.), they, too, stay human.

1-4 points: Does the movie give us a reason to care about anything happening on screen?
4/4. Some might argue that we can't care about Dwight's motivation because we never see a flashback to his parents' murder and its aftermath. I disagree. The fact that he's homeless tells us enough about the aftermath. His actions tell us enough about the brutality of the initial act. So does the tight face of his sister, when we meet her.

Verdict: 20/20. The violence may pose a problem for squeamish viewers, but if you aren't among those, check this out. I really, really regret that I couldn't see Blue Ruin on the big screen it deserves.

Found-footage horror stakes out the Paris Catacombs in As Above, So Below. Pierce Brosnan is The November Man in a spy thriller. Mood Indigo, the latest from Michel Gondry, is only at the Savoy.