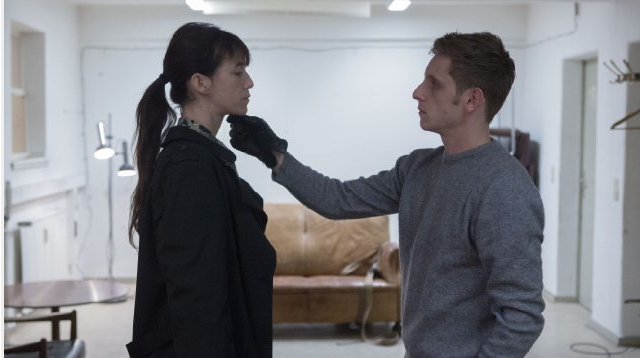 This week in movies you missed: Perhaps you noticed that Lars von Trier's Nymphomaniac: Vol. I played for a week at Merrill's Roxy Cinemas this past spring. Perhaps you didn't. Anyway, the theater never booked Vol. II of the Danish provocateur's new duology about sexual obsession, so those who hoped for a big-screen experience were left, er, hanging.

Well, now Netflix Instant subscribers can stream the rest of Nymphomaniac (or the whole thing, at least till the director's cut comes out). It's also available for rental at Amazon and other VOD outlets. So I gave myself the two-night von Trier immersion experience.

First of all, don't see Vol. II without seeing Vol. I. For those readers who have not, here's the premise in a nutshell, lifted from Rick Kisonak's glowing review of the film in this publication:

A middle-aged bachelor named Seligman (Stellan Skarsgård) discovers a brutalized woman (Charlotte Gainsbourg) crumpled on a cobblestone street and brings her to his apartment. Her name is Joe. She doesn't want him to call an ambulance or the police. What she would like is a cup of tea.

Seligman tucks her in, dressed in a pair of his pajamas. But, instead of sleeping, Joe announces she's "a bad person" who deserved what was done to her and proceeds to recount episodes from her life, Scheherazade-style, to prove it. These stories track her virtually lifelong obsession with meaningless sex and "rebellion against love-fixated society." Model-turned-actress Stacy Martin plays her in her youth.

The second film continues Joe's narrative, with the usual periodic interruptions and digressions from Seligman. It opens with our heroine attempting to live up to the standard expectations of adulthood: husband, baby, nice apartment. That doesn't last long, because Joe has abruptly lost her ability to reach orgasm, and she's obsessed with getting it back.

Gainsbourg takes over the role from Martin as an older Joe tries promiscuity (again), followed by a more extreme remedy: a regimented bondage-and-discipline relationship with a quiet fellow known as K. (Jamie Bell; von Trier really seems to have a thing for putting former child stars in his decadent universe). After trying a last resort, a support group for sex addicts, Joe abandons her attempts to be "normal" and embraces her status as an outsider to bourgeois society — an artist, a criminal, a nymphomaniac.

I used not to like von Trier. I think it was because I took him too seriously when he riffed on, say, the motifs of Christian masochism and martyrdom.

These days I think the director is punking his viewers, but in a very 18th-century manner, and both parts of Nymphomaniac — which I greatly enjoyed — bear me out.

To translate what I mean: Don't watch von Trier's films as statements about how the world is or should be, but as thought experiments that exaggerate it in comic and allegorical directions.

For instance, Melancholia starts from the proposition: "What if a depressive's distorted view of the world were right and everybody else's was wrong?" It's a devil's advocate film, pinpointing and gleefully refuting the very optimistic, liberal, humanitarian beliefs that characterize its target audience.

So is Nymphomaniac, which I don't think is really about sex (though, warning, there's a lot of unsimulated sex, performed by porn-actor doubles, in these films). It's actually about sin, or the possibility thereof.

Joe calls herself a sinner. Seligman — a scholar who represents the liberal humanist type von Trier loves to nettle — won't have it. She's not a bad person, he insists, just a misunderstood woman trying to express her sexuality in a male-dominated world. Joe's story — which gets darker and darker as Vol. II proceeds, with fewer and fewer comic-relief interludes — is designed to prove him wrong.

Is von Trier dogmatically promoting the sex-as-sin view? I doubt it. Rather, he's deconstructing Seligman's philosophy to reveal that there's a lot of crazy, compulsive randomness in human behavior that "humanism" can't encompass or countenance. Just as the Marquis de Sade posed a problem to the rationalist Enlightenment (while also being part of the Enlightenment), so Joe poses a problem to Seligman and us. She's even more of a problem when we recognize parts of ourselves in her.

But enough of that. My 20-point, highly scientific scale for the assessment of indie films:

1-4 points: Does it look pretty?
4/4. Gorgeous, especially the outdoor scenes.

1-4 points: Does anything happen?
3/4. Vol. II has less variety and fun than Vol. I. Like sex addiction itself, it gets to be a bit of a slog. But I was still far more involved than I am in most indies, because von Trier has no interest in standard narrative arcs and can and will bring anything in from left field at any time.

1-4 points: Does what happens make sense?
4/4. Surprisingly, yes. I've seen mixed views on the film's ending, but for me, it was of a piece with the whole.

4/4. When a director has a consistent style and a reason for it, I'm fine with characters being heavily stylized, as these are. Within their set parameters, they act consistently.

1-4 points: Does the movie give us a reason to care about anything happening on screen?
3/4. I didn't care about the supporting characters, but I did care about the outcome of the conflict between Joe and Seligman. By the end, I found myself (with some surprise) rooting for her.

Verdict: 18/20. The two-part, four-hour Nymphomaniac feels more like a Euro miniseries than a film. If people are streaming it in droves just for the (often awkward, ugly and unpleasant) sex scenes, well, that's their prerogative. I recommend it for a different reason: It's one of the most creative, risk-taking, invigorating movies I've seen all year.

At the Roxy and Savoy: Boyhood, at last. Plus Woody Allen's Magic in the Moonlight.

At the Palace, the indie romantic comedy What If, starring Harry Potter and Zoe Kazan, which has drawn some good reviews.

Elsewhere: a comedy (Let's Be Cops), another YA dystopian fantasy (The Giver, from Lois Lowry's book) and the comic dystopian (I think) vision of aging action stars kicking ass in The Expendables 3.

Locke, A Haunted House 2, The Railway Man, Muppets Most Wanted.

Movies you missed Web Only