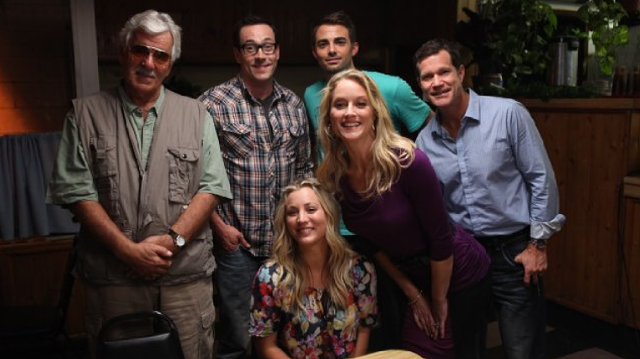 This week in movies you missed: a movie that decisively answers the questions: Why has no one ever made a Christopher Guest-style mockumentary about aspiring novelists? With the number of self-published books mounting every year, isn't this a phenomenon ripe for satire? Aren't amateur writing groups at least as easy to mine for comedy as dog shows, folkies and community theater?

An invisible documentary crew introduces us to six unpublished LA writers who meet regularly to share their work. They include:

Naturally, it's Hannah, the Sweet Young Thing, who wins an agent, a publishing contract and a movie deal in quick succession. And naturally, her success sends ripples of envy and vitriol through the group.

I can't find a Box Office Mojo listing for Authors Anonymous, which appears to have had a very limited 2014 theatrical release and pulled a whole 16 percent on Metacritic. Now on Netflix and Amazon Instant, etc.

I had just one reason for checking out Authors Anonymous: I know the fiction writing world and wanted to see how astutely (or not) Hollywood could mock it. Something tells me most of the people who stream the movie on Netflix will have similar motivations. (And there are a lot of us. The Burlington Writers Workshop alone has several hundred members.)

Ergo, Authors Anonymous is only (mildly) funny when it mocks its characters for being awful human beings with misplaced pretensions to literary greatness. When it attempts to make us care about Klein's character and believe in his writing talent, it falls flat on its face.

1-4 points: Does anything happen?
3/4. Hannah gets inexplicably rich and famous, so yeah.

1-4 points: Does what happens make sense?
2/4. I'll give this movie a few points for being slightly closer to industry realities than most flicks about writers. The agents here aren't portrayed as elderly Ivy Leaguers with bow ties seeking the next Hemingway. Hannah's book doesn't instantly appear on shelves. The characters don't all insist on using manual typewriters.

And it's certainly not impossible that Hannah could win a huge advance for her fiction without knowing what a metaphor is or being able to name a single author she enjoys. But it would be nice to have a clue to her appeal. We don't know a thing about her book except that it has a dumb title (Sleeping on the Moon) and involves romance. From this we're apparently supposed to deduce that Hannah is undeserving of success, while the Fitzgerald enthusiast, who has an unrequited crush on her, must be an unsung talent because he enjoys Great Literature written by canonical white males.

Nothing against the great Fitzgerald, but that's just lazy, unimaginative stereotyping. I'm a writer, dammit. If Hannah has written a horrible book with best-seller potential, perhaps a tender romance that started as a Fifty Shades of Grey fan fiction, I want to hear just how bad it is!

But here's where we run up against the problem that people writing, or reading their writing, just aren't cinematic.

1-4 points: Do the characters seem like real people? Failing that, do they look pretty?
2/4. Saying these characters seem like anything but tired clichés would be a stretch, but the comic acting is still a saving grace of Authors Anonymous. Walsh and Polo, in particular, interact amusingly as the fatuous central couple and deserve a better script.

There's an unlikely subplot about faux Tom Clancy's gorgeous German girlfriend that seems to have no purpose except to put Tricia Helfer of "Battlestar Galactica" in the movie. Jonathan Banks is likewise shoehorned in as a grumpy literary agent, but I can never complain about an opportunity to see a grumpy Jonathan Banks.

1-4 points: Does the movie give us a reason to care about anything happening on screen?
0/4. When Authors Anonymous attempts to get serious and make us care about Klein's bland character and his quest for love and a publishing contract, that's when it goes from fun-but-forgettable to deeply annoying.

Guest knew better than to exempt anyone in his films from mockery — all satirists do. By ridiculing some of these characters far more gently than others, Kanner makes a film that actually feels more mean-spirited toward aspiring authors than it should.

Verdict: 7/20. I still think someone could make an astute filmic satire of a writers' critique group, somehow. This ain't it.

Chadwick Boseman plays James Brown in the biopic Get On Up. More Marvel Comics characters come to life in Guardians of the Galaxy, directed by James Gunn (Slither, Super).

At the Roxy and Savoy, the late, great Philip Seymour Hoffman stars in the le Carré adaptation A Most Wanted Man. At the Savoy only, The Grand Seduction offers Canadian small-town comedy.


The Den, a horror flick with a Vermont-raised director, on DVD and Netflix Instant. Also Finding Vivian Maier, Noah and The Other Woman.

And on Netflix only, season 4 of "The Killing," the Seattle detective show that redeemed itself with a surprisingly great season 3 after a lackluster start.