Gargoyles Guarding Bikes in Barre, and Other New Sculptures 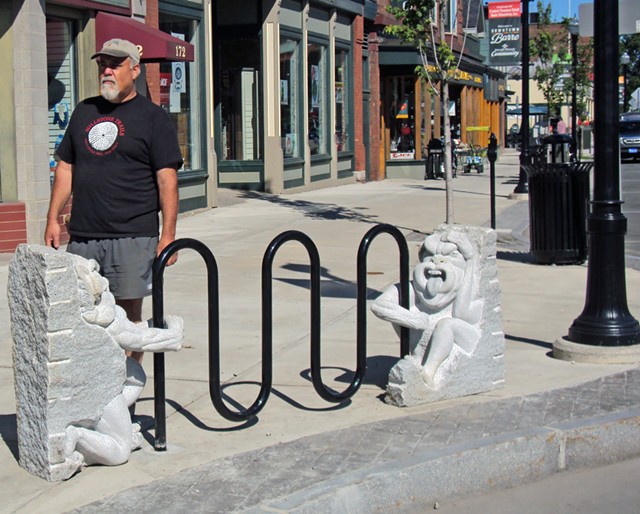 Bicyclists in downtown Barre now can take advantage of a curious new addition to the Main Street curbside: a pair of granite gargoyles, faces twisted and tongues extended, flanking either side of a serpentine bike rack.


The sculpture, by Calais sculptor Chris Miller, is the first of three commissioned bike-rack sculptures to be sited around Barre in coming months. The other two are by area sculptors Giuliano Cecchinelli Jr. and Heather Ritchie. Cecchinelli's is a jack-in-the-box adorning a spring-style bike rack; Ritchie's is a sculpture of a big-wheeled tricycle that appears to jump from one side of the bike rack to the other. All three are carved from Barre granite.

The bike racks are funded by the Stone Sculpture Legacy Program, which is overseen by Sue Higby, executive director of Studio Place Arts. Last year, Miller, Cecchinelli and Ritchie were commissioned to create the sculptures with money from the Charles Semprebon Fund, as well as other public artworks.

Sempron, a businessman and Barre native, left $2 million to the city when he died in 2009 at age 66. About half of that money was earmarked to complete a bike path between Barre City and Barre Town (Semprebon's enthusiasm for cycling combined with Barre's granite-working history inspired the bike rack sculptures.) And Higby received a "very substantial" chunk of money, she says, to promote public art in Barre, paying homage to its legacy as a stone capital.

"Barre was definitely the original art city in Vermont, and I would say the region," Higby says. "People would come from Europe — Italy, Spain and Scotland — to use some of the best granite in the world ... And people try to live next to the best material they can get their hands on, because it's so expensive to ship."

The bike racks are just a few of the Stone Sculpture Legacy Program initiatives underway, Higby says, all designed to spotlight local talent and local materials.

Another public work commissioned by the Stone Sculpture Legacy Program was installed at City Hall this week: a statue of Sir Isaac Barré — the British champion of American independence for whom the city was named in 1793 — by Barre sculptor Giuliano Cecchinelli Sr.


"My hope is to get a larger recognition of the talent that is here in Barre," Higby says. "Most of the very fabulous work that is done here is shipped out."