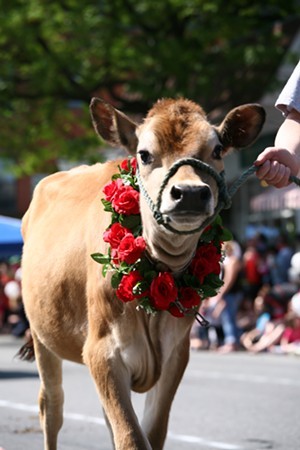 California-based real estate company Movoto has just released a fun (and maybe even somewhat accurate) list titled "25 Things People From Vermont Love." It's a pretty wide-ranging list, taking in everything from residents' ubiquitous Subarus to covered bridges to the use of cow poop for fuel. Perhaps these guys are on to something. What self-respecting Vermonter wouldn't want to repurpose cow crap?

Movoto's chief business is the selling of real estate, but the company has earned a fair bit of attention for its lighthearted city- and state-specific lists, such as this dubious tally of reasons to move to New Jersey.

"The lists have a couple of purposes, the first of which is to get people talking about the place they love," writes Movoto content manager Randy Nelson in an email. "The second is to give people a sense of what it's like to live in a place that they're thinking of moving to. In that latter case ... there's a direct connection to our core business."

Movoto staffers compile the city-centric lists by speaking to friends in those cities and participating in online forums specific to the areas, writes Nelson. "They also read business/restaurant reviews, and generally read up on everything they can about a city or state's highlights before putting words on the screen."

Vermont has shown up a couple of times previously on Movoto's site, once in a list of 15 of the state's best restaurants, and again in a list of  Things You Need to Know before moving here (#6: "Ben and Jerry will be your homies").

Plenty of other objects of Vermonty affection aren't represented on the page, so readers are hereby encouraged to use the "comments" section to give the list a little authentic local character.