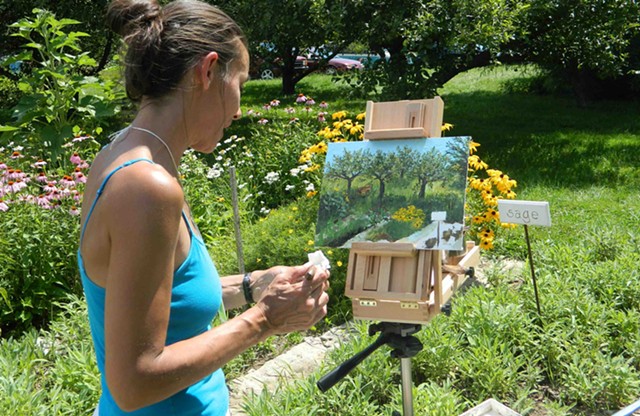 This Saturday, come rain or shine, 75 artists will set up their easels in a number of designated areas and paint all day as part of the 4th Annual Jericho Plein Air Festival. From 9 a.m. to 3 p.m., the public will be invited to pick up a map of those sites, take a stroll and chat up the artists — which include both professional and emerging painters — as they work.

Painters Barbara Greene and Jane Morgan run the event along with Emilie Alexander, owner of the local Emile A. Gruppe Gallery (named for her late father, a renowned landscape painter). All of the paintings created on Saturday will be exhibited at the gallery through August 10; it will open with a reception on Sunday, July 20, 2-4 p.m.

Alexander, Greene and Morgan dreamed up the festival five years ago with a shared desire to bring more visibility to local artists. "It’s easier for [crafters] to get into the public eye," Greene opines, referring specifically to booths at farmers markets and craft fairs, where fine art is a hard sell. "Painters usually work in isolation," she adds.

The longtime friends hatched the idea of holding an outdoor painting event, which would serve the dual purpose of getting painters out of their studios and giving the public a peek into their artistic process. Plein air painting festivals, the women had heard, were gaining popularity nationally.
“In the last five to 10 years, a huge number of artists — especially in the West and the Southwest, because, I think, the weather is better out there — really started moving outdoors to paint," Greene says. "That’s really developed into a movement around the country."

But the Vermonters found the model for many plein air festivals too competitive, being invitation-only or offering only juried exhibitions after the event. Many have high-cost entry fees, as well.

Greene says they had a more inclusive event in mind for Jericho. "We wanted local people," she says. "People who would want to come and sit outside and paint for a day."

Accordingly, the women brainstormed a list of some 35 area artists who they thought might be interested in painting together for an afternoon. They invited those artists to register and put out a call to artists in area newspapers in early 2010. And the response was overwhelming. By May, more than 100 artists from around Vermont and New England wanted to participate. “Word traveled very, very quickly," Greene remembers.

The organizers capped registration at 75, drew up a logo and registration forms, and went forward with the event. "And what happened was that some people sold work right off their easels, then we had an exhibit very quickly at the end of the day," Greene says. "It was pretty chaotic .... After, we sent out an evaluation form and people said it was wonderful."

The festival's reputation, Greene adds, "really spread like wildfire among the artists" after its successful first year. It has continued to attract more than 75 painters each year, including many returnees. Greene credits the event's easygoing vibe.

"The entire festival is entirely noncompetitive," she says. "We didn’t want to be like any of the national shows. We give the artists breakfast. We don’t give prizes and you don’t get juried in." Artists pay a $20 entry fee, and many of them sell work during the day or at the following exhibit.

The ethos of community and inclusiveness even extends beyond festival days — and beyond Jericho. This year, the Jericho Plein Air Festival and Waitsfield's annual Great Vermont Plein Air Paint-Out pooled resources to purchase print ads in Yankee Magazine, Art New England and other publications. The partnership, Greene says, was a no-brainer because many local and regional artists attend both events.

A bonus? Local painters often meet "painting buddies" they can hang out with throughout the year. "One of our goals was to give the artists an opportunity to paint together and enjoy each other's company," Greene says. "And it’s just wonderful to see people who had never even met now go and paint together."