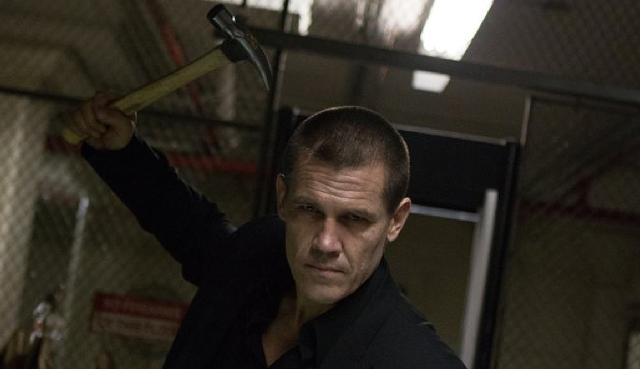 This week in movies you missed: Last Thanksgiving saw the release of a film directed by Spike Lee and starring Josh Brolin, Elizabeth Olsen and Samuel L. Jackson. Almost nobody saw it. I find out why.

To be honest, I already knew why this movie wasn't a good fit for a post-turkey family trip to the movies. And if you saw the original Oldboy (2003), a cult film from Korean director Chan-wook Park, so do you. The question is, is Lee's Oldboy really as bad a film as its dual status as unnecessary remake and box-office bomb might suggest?

Joe Doucett (Brolin) is an asshole. Everybody hates him, from his boss to his business clients to his ex-wife, who can't believe he doesn't care enough to show up for his daughter's third birthday. On this day, somebody does something about it.

Joe passes out drunk and wakes in a hotel room with a locked door and barred windows. Each day his invisible captors feed him vodka and Chinese dumplings. The television informs him that his ex-wife has been brutally murdered and he is the prime suspect.

Twenty years pass, during which Joe learns martial arts from the tube, gives up the bottle, and vows to kill his captors and reunite with his daughter, who has been adopted. But just as he's about to escape, he is unexpectedly released into a world he no longer understands. With the help of a sympathetic nurse (Olsen), he sets out to learn who imprisoned him and why. And to kick their collective ass.

Oldboy reached 583 U.S. theaters — none in Vermont — and ended up grossing about $4.9 million worldwide. Its production budget was $30 million. The property had originally been optioned by Steven Spielberg, and Will Smith had expressed interest in playing the lead role.

Oldboy is now on Netflix and Amazon Instant.

It's hard for me to judge this film as a virgin viewer. Had I not seen the original Oldboy, my reaction would probably be a single "WTF?" Followed by "Thanksgiving? WTF were they thinking?!" Followed by "Hey, at least that movie went somewhere and took risks. It looked great, the plot was seriously twisted, and the action scenes were cool. Still, it should have starred Nicolas Cage and gone straight to video."

Because I have seen the original Oldboy, however, my reaction was more along the lines of "WTF is Hollywood doing remaking these so-called 'Asian Extreme' movies when there is no conceivable way to get them right?"

It's a relevant question. New in WTF news: The producer of Basic Instinct is planning a remake of Takashi Miike's Audition.

Hollywood has been doing this since it remade The Ring, which actually kind of worked. Why doesn't it work with Oldboy, or anything else?

Usually it's because the remakers of these cult films remove everything that was weird and off-putting in the source material, clearly not understanding why it inspired a cult in the first place. So the bizarre and poetic Pulse became just another cyberthriller, and the creepy and surreal A Tale of Two Sisters became The Uninvited, a routine PG-13 ghost story with a twist.

This is not true of Oldboy. Lee and screenwriter Mark Protosevich made a strikingly faithful remake of Park's film, rather than returning to its manga source material (as Spielberg had said he would do). The plot twists are intact, as are (more predictably) the famous ultra-violent action sequences. Where Protosevich has made notable changes — in the villain's backstory, for instance — he has often made the story more demented and disturbing rather than less. (Don't expect to see Brolin eat a live octopus, though.)

My speculation about why: Hollywood cinema doesn't have a strong tradition of live-action movies that combine "realistic" situations (no superheroes or magic) with psychological melodrama and comic-book hyperreality. It's a formula that works beautifully in Asian cinema, but not really for us unless Tarantino's doing it.

For whatever reason, I find myself suspending my disbelief for a film like the original Oldboy in a way I couldn't do for this one. Maybe the language barrier actually helps; maybe the acting in the original is more convincing. (Here Brolin is OK but dull; Olsen feels fake throughout, which has more to do with her character's underwritten motivations than with her skills.)

Maybe Park's wonderfully absurd, almost fairy-tale-like revenge story just doesn't work in an American context. Maybe Lee needed to establish the hyperreal atmosphere earlier and better. (It kicks in by the hotel scenes, which are pleasingly stylized, but the early ones of Joe treating people like a jerk are drab and tiring.) Maybe Protosevich shouldn't have written out the character's sexual rapacity after he's released from 20 years in confinement, alienating as that aspect is to viewers.

In the original Oldboy, everybody — including the ingenue heroine — comes off as volatile and a little crazy. They aren't "likable" characters, but they work together. And that film at least offers an explanation, however silly, for the heroine's actions. Here, Olsen seems to be in a different movie from Samuel L. Jackson or Sharlto Copley, who plays the over-the-top villain. We're told her character is a recovering addict with major issues, but all we ever see is "pretty girl looking concerned."

This Oldboy is not boring, and I'll admit the hammer scene was fun, even though multiple movies have already copied Park's version. Lee has his single take play out on two levels, as Brolin takes down seemingly hundreds of dudes with one busy hammer. But it doesn't touch similar scenes in The Raid 2.

Verdict: If you know how Oldboy ends, you know there's no way an even semi-faithful remake could make big bucks in the U.S. Mystery solved.

Would Lee's preferred longer cut have fixed some of this movie's problems? Maybe. But it's still hard to see the point of remaking Oldboy just so Americans can watch it without subtitles, when everyone who might want to see a movie like this one already has.

Except to offer us endless, nerdy opportunities for comparison. Lucky the original's still on Netflix Instant, too.

Melissa McCarthy as Tammy. Kids meet an alien in Earth to Echo. Eric Bana meets Satan (or something bad, anyway) in Deliver Us From Evil.

And new on Netflix Instant: The Believer (2001), which I think is an amazing movie about faith, doubt, self-hate and extremism, starring Ryan Gosling in a star-making performance as a complex and far-from-dreamy character. Mileage may vary; this one provokes strong reactions. It's like a combination of American History X and A Serious Man.