A Metal "Dancer" Poses on the Winooski River | Live Culture

A Metal "Dancer" Poses on the Winooski River 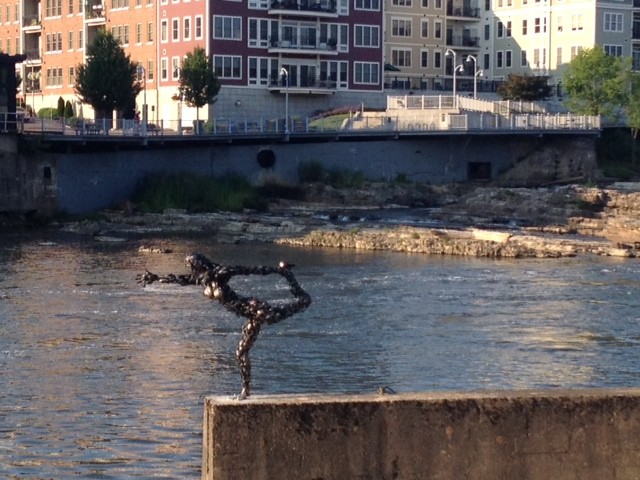 The banks of the Winooski River are scattered with reminders of the area's industrial past. Recent municipal efforts to beautify downtown Winooski and the northernmost tip of Burlington have incorporated, rather than eliminated, the concrete foundations and abutments of old mill structures. Some of the mills themselves, notably the Chace Mill on the Burlington side and the Woolen and Champlain mills on the Winooski side, were privately purchased, renovated and converted into apartments, studios and business spaces.

On Sunday, an artist and a local business owner made another contribution to the revitalized riverfront: a metal sculpture of a life-size figure balanced in the yoga pose natarajasana (or "dancer"). She's installed on a slab of concrete that juts into the rushing water.


Burlington sculptor and Conant Metal & Light staffer Tyler Vendituoli — more recently known locally for "Odgen," the 3,000-pound, scrap-metal rhino sculpture he showed at last year's South End Art Hop outside of Conant on Pine Street — created "Natarajasana" early last year. The sculpture was inspired, he says, by conversations with people in his life who were beginning to explore yogic practices, including intentional diets.

Those conversations were on his mind in early 2013, when the Vermont Institute for Contemporary Arts in Chester asked him to create a piece for a show. Vendituoli created "Natarajasana" from 1,200 — or "one hundred dozen," as he prefers — donated stainless steel forks, spoons and knives, exploring a "you are what you eat" concept in art form.

After the VTICA show ended, the sculpture moved to Conant. There it was spotted by Trevor Sullivan, owner of Pingala Café, the vegan restaurant in the Chace Mill. As Vendituoli recalls, Sullivan was shopping for light fixtures for the café when he was drawn to the sculpture. Both men thought the piece would fit visually with the revitalized mill area, and with the ideals of Pingala and fellow Chace Mill business Laughing River Yoga.

"Because of what Pingala is, and with the yoga studio being there, and [the statue] being in the water balancing on that pier — it feels like all the elements click right together," Vendituoli says.

Sullivan launched a successful Kickstarter campaign, raising the $3,700 needed to purchase the sculpture. Installation was delayed while he tried to figure out who owned the concrete slab where "Natarajasana" was to be placed. "Trevor’s been working really hard to find out who owns it and nobody’s been claiming it," Vendituoli says, noting Redstone Commercial Group, which owns the Chace Mill, as a possibility.

"It's one of those gray areas, because it's beyond the median high water [level] and it's not actually interfacing with the natural rock," Vendituoli says.

Vendituoli and Sullivan both say they'll remove the statue and repair any damages if an owner steps forward and asks them to — "damage" being three holes bored into the concrete.

Last Sunday morning, accompanied by a film crew that's following Vendituoli's work this year, the sculptor and a friend set up climbing ropes from the shore and waded through waist-deep water to install the 75-pound sculpture on a slab about 10 feet out into the river.

By late afternoon, sunlight was glinting off the sculpture's outstretched hand, and cars were turning into the Chace Mill parking lot. Several groups stopped to take pictures. Some observers even attempted the "dancer" pose.