You may not have given it much thought, but the majority of mainstream American films are astonishingly similar from a structural perspective. Not that the stories are the same, of course, but most Hollywood films have the same “skeleton.”

I’m not talking about the three-act structure (or two- or four-act, depending on which screenwriting guru you prefer) that governs story development. Rather, this level of structure runs even deeper: the intertwining of the “Action” and the “Romance” storylines.

The heroes in most Hollywood films have two goals: to defeat the Bad Guy (or destroy the microfilm, save the world, etc.) and to achieve love — what used to be called “getting the girl.” Typically, the achievement of one of these goals is accompanied by the achievement of the other; they reinforce one another.

The answer to both questions is yes. In fact, the story of The Matrix is set up in such a way that a single gesture — a kiss — simultaneously confirms both affirmative answers.
Explaining how it works requires a little plot summary. The few remaining free humans have been given a prophecy by the Oracle, their spiritual leader. It is that, sooner or later, a young man known only as “the One” will arrive, and will be the only person who can free humanity from its servitude to the machines that control them.

Trinity, in one of her own visits to the Oracle, has also been given a prophecy: that she will fall in love with the One.

OK. So, a young man named Thomas A. Anderson (but soon dubbed “Neo”) appears, and there’s some speculation he may be the One, but nobody can confirm it, least of all Neo. Trinity takes a shine to Neo, but Cupid keeps all his arrows in his quiver.

Neo may not be the One (but here’s a hint, kids: “Neo” is an anagram of “One”), but he gamely devotes himself to the task of freeing humanity; he knows a good cause when he sees it. In battling the Agents (the machines’ soldiers), Neo is wounded and soon dies. Trinity, grief-stricken, approaches the chair in which Neo has expired. “You can’t die,” she says to his lifeless form, “because I love you.” Then she kisses him softly.

Trinity’s kiss brings Neo back from the dead. Even though the Oracle had foretold that she’d fall in love with the One, she's still shocked to see Neo return. And it's a dramatic return in which Neo commences to kick some serious machine ass. Not to mention spawn two regrettable sequels, about which the less said, the better.

Still, notice how this works. It’s one of the “cleanest” examples I know of a single gesture completing both the Romance and Action storylines. The masterstroke here is having the two prophecies be interdependent. Whoever Trinity falls in love with will, by prophecy, be the One; since she falls in love with Neo, it must be him. Had she not kissed him, humankind would have no savior.

It’s a particularly good example of this “two birds with one stone” screenwriting gambit, but it’s by no means the only one. A few others that come to mind include North by Northwest, Jerry Maguire, Gremlins, Star Wars, Scott Pilgrim Vs. the World.

There are exceptions, of course. Many war films have no real Romance storyline (besides a generalized yearning for the Girl Back Home). And many romances are not structured in this way, either, lacking an Action storyline. I’m not claiming this device is universal in movies — just that it’s very common.

Why do so many films use this two-part structure? The answer has to do with “offering something for everyone.” Those interested in action and suspense can find something to enjoy, as can those looking for a love story. Don’t forget that we're talking mass-market movies, aimed at as wide an audience as possible.

The Matrix may well have achieved a kind of Holy Grail of Hollywood storytelling: the unification of the two main narrative strands in a single, simple gesture. Why do it this way? To achieve the eternal goals of elegance and narrative economy.

I watched a film last weekend that, despite having the same storytelling tradition as films like The Matrix, exhibited a surprisingly clunky approach to the integration of the Action and Romance storylines. Though there’s more than one way to tell a story, I was somewhat disappointed that Man Hunt didn’t find a more elegant way to blend its two major plotlines. (Exceedingly attentive readers may recall that I discovered the DVD of Man Hunt when on a thrifting excursion.)

The Action story has Captain Alan Thorndike on the run from the Nazis after he nearly assassinates Adolf Hitler. The Romance story has him falling for Jerry Stokes (Joan Bennett, director Fritz Lang’s favorite leading lady), the young British woman who aids him in his flight.

What struck me most strongly about Man Hunt was how little the two stories informed each other. Though Jerry sort of helps Thorndike keep one step ahead of his would-be captors, she really doesn’t take a very active role. For the most part, the scenes of their growing fondness for each other don't really inform the scenes of Thorndike evading the Nazis, and neither do the Action scenes inform the Romance scenes, except by coincidence. And coincidence is the exact opposite of elegance and narrative economy.

The key example: When Thorndike manages to make it to London after fleeing Germany, he enlists Jerry’s help simply because she’s the first person he meets.

This non-intersection of the two storylines creates a structure in which Action and Romance scenes alternate but have little to do with each another. I found the rhythm to be a little plodding.

In fact, I was doubly disappointed in this film because I admire Lang so much. This was one of the small number of his films I had yet to see (still looking for Moonfleet and American Guerrilla in the Philippines!), and I had high hopes. Ah, well. Not every one can be a winner. Hey, no less an actor than Michael Caine appeared in Jaws: The Revenge. And On Deadly Ground! Fritz, you’re still all right by me. 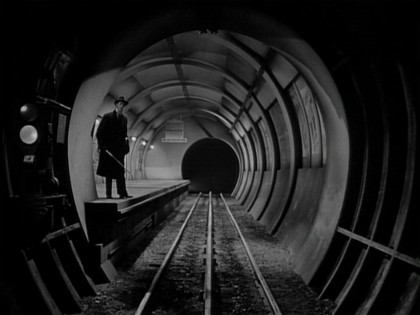 If my assessment of the structure of Man Hunt is accurate, it opens up a potentially interesting historical question. In the 70-odd years since that film’s release, has Hollywood placed a greater premium on “tighter” screenplays? That is, is it more important now than it was in the 1940s for the Romance and Action plots to inform one another meaningfully, and thereby achieve a greater degree of narrative economy? My gut response: Yes. “Tight” screenplays are more important now than they ever have been in Hollywood’s history.

In other words, the time is right for a remake of Man Hunt that might improve on the original. Scribes, get writin’.