SEABA Sells Out 'Art Under the Influence' Series | Live Culture

SEABA Sells Out 'Art Under the Influence' Series 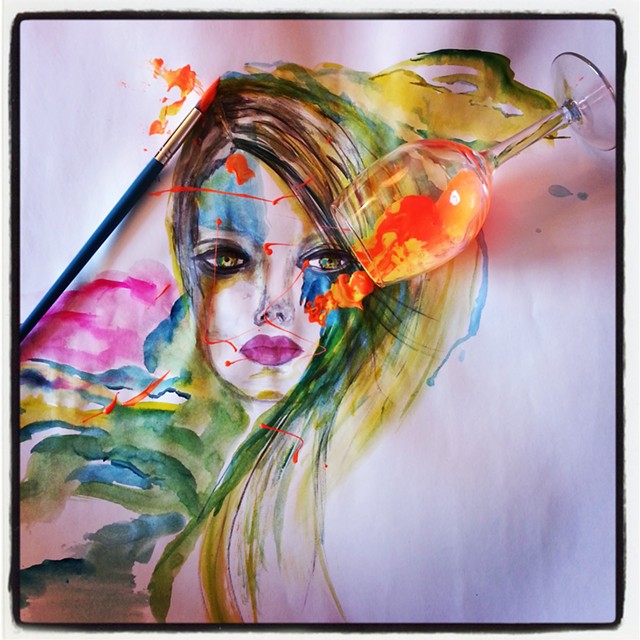 "There's nothing like creativity and drinks," notes Adam Brooks, executive director of the South End Arts and Business Association. That's as good an explanation as any for the runaway success of "Art Under the Influence," a series that SEABA launched last November.

Now held twice-monthly, Art Under the Influence brings in local artists to demonstrate the process of creating a piece of artwork in their medium and style. Twenty to 30 participants gather in a space such as Nectar's, Vin Bar or Citizen Cider for a two-hour workshop taught by the artist. The $35 registration fee covers the cost of all materials, plus a free drink from the event's sponsor (that's Citizen Cider for all upcoming events; past events were sponsored by Switchback).

By the end of the evening, each participant has created their own work of art "under the influence" of the featured artist to take home. Past "influences" have included Katharine Montstream's watercolor landscapes, Jenn Karson's e-textiles and Lyna Lou Nordstrom's prints.

Brooks says the Art Under the Influence series is just SEABA's most recent effort to foster creativity in the Burlington community. "We do notice that a lot of people lose [the impulse to create freely] after college as adults, and we wanted them to get back in touch with that," he says. "And coming to a social, open place to create a masterpiece that they can take home is really kind of a neat way to do it."
If that tempts you, you're in for a long wait. SEABA has sold out its Art Under the Influence events through early August.

The events have been popular from the start, though at first Brooks intended to roll them out slowly. "We were only doing one a month and just kind of learning how they ran and working with the artists," he says.

The first event, led by Montstream, a well-known Burlington painter and longtime SEABA member, sold out. So did several of the six events held since then.

Given the initial burst of popularity, SEABA is now "going full force" and putting marketing behind the series through its own arts and business networks, social media and LivingSocial.com, according to Brooks. The events now take place twice a month — and Brooks may increase that to three times a month, since upping class size isn't an option. "We want it to be comfortable for everyone, and we want the artist we have present to feel comfortable in an intimate setting," he says.

Inspired by programs in other cities that combine the arts and libations in a social setting, such as Boston's Paint Nite (tagline: "Drink Creatively"), Brooks says the goal of Art Under the Influence is plain old community bonding. "It’s unique to Burlington to have a social painting environment that both benefits the businesses we [hold the event] in and benefits the attendees. Plus the artist gets some exposure," he says.

Despite the event's popularity, Brooks laughs when asked if it is also lucrative.

"Not tremendously," he says. "We do pay for all the supplies for 20 to 30 people, and those costs vary depending on the materials. We pay the artist as well. And we pay for the free drinks."

Art seaba art under the influence burlington Web Only