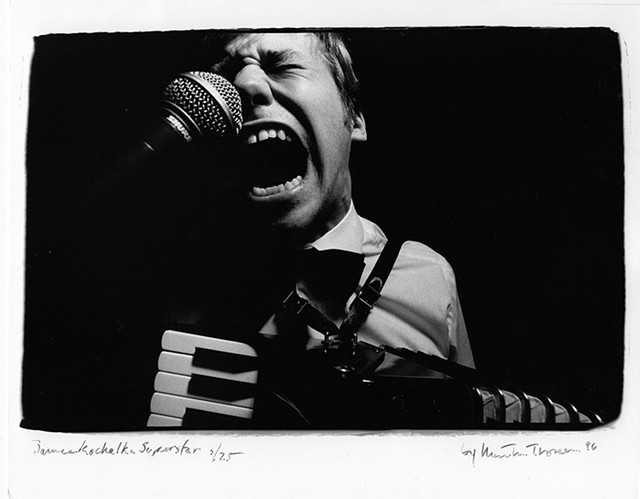 Once upon a time, the band photo was a staple, nay, the cornerstone of any good band press kit. We're not talking hastily shot jpegs, kiddos. We mean artistic, physical photos printed on glossy paper and usually embedded with important info like the band's name, logo, phone number and, in the case of especially tech-savvy groups, their AOL email address.

More essential than whatever crappily written bio or out-of-context quotes were included on the one-sheet, the photo was often the most important and revealing element of a band's press kit. You could tell a lot from those little 8x12s. Was the pic creatively posed or funny? Then the band was probably pretty interesting or at least entertaining. Was it shot against a brick wall with four gangly-looking dudes or dudettes glowering and smoking cigarettes, like 90 percent of all band photos ever? Then there was a good chance the band was equally predictable and dull. A good general rule of thumb: A band that puts thought and effort into their photos probably does the same with their music.

From the 1990s to the present, few if any local photographers have taken more great band photos than Matthew Thorsen, who shot many of them for this very newspaper.

In 2010 and 2011, in partnership with Big Heavy World, Seven Days and Creative Habitat, a multimedia exhibit of Thorsen's work, Sound Proof, the Photography of Matthew Thorsen, Vermont Music Images 1990-2000, toured the state. It included dozens of Thorsen's black-and-white photos of Burlington bands taken in the 1990s, as well as an audio component with music from each band and commentary from Thorsen.

For fans of that fondly remembered era of Burlington rock, the exhibit is a multisensory blast from the past and a welcome mosh down memory lane — or down lower Church Street to Club Toast. Even for those who weren't around BTV in the 1990s, it's a vital piece of local music history, a look back at a time when a good band photo meant more than whatever cheesy Instagram filter your drummer's girlfriend used with her iPhone the day you were all standing in front of that brick wall ripping American Spirits.