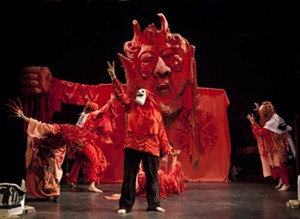 Bread and Puppet Theater, which celebrated its 50th anniversary last year, wraps up an indoor revival tour of one of its classic shows, Birdcatcher in Hell, in coming weeks with three final performances in Vermont and one in Montréal.

Birdcatcher is an elaborate pageant, and one of the Glover-based puppet and political theater company's oldest pieces. Founder and artistic leader Peter Schumann created its first incarnation in New York in the mid-1960s with the poet Bob Nichols. The original show featured all-blue masks and puppets that enacted bombardment scenes from Vietnam.

In 1971, while Bread and Puppet was in residence at Goddard College, Schumann resurrected Birdcatcher in response to president Nixon's pardon of the single solider who had been held accountable for the My Lai massacre in Vietnam. That time, Schumann's papier-mâché puppets were blood red, and the show featured an enormous and elaborately designed "King of Hell" puppet.

In honor of its 50th, Bread and Puppet relaunched Birdcatcher (the red version) for the anniversary tour. Though the show's political context has been altered to fit the Bush and Obama years — topics include drones and Guantanamo — many of the masks and puppets are originals that have been stored for decades in the company's barn in Glover.

Several members of the original cast from 1971, including Sue Bettman, Mark Dannenhauer, Marc Estrin, Barbara Leber, Avram Patt have returned to perform alongside Schumann. The more fragile cloth costumes were recreated over the winter by a group of volunteers led by Lila Winstead, manager of Bread and Puppet's printing press.

Birdcatcher comes to the Flynn MainStage in Burlington tonight, May 16, at 8 p.m. On May 29, they're at the Bellows Falls Opera House; May 30 at the Barre Opera House; and June 26 in Montréal.

Speaking of Bread And Puppet, theater