When singer-songwriter Rachel Bissex, a beloved fixture of the Burlington-area folk and jazz scenes, died of breast cancer in 2005, she was mourned by her family and many friends and fans. And her death was strongly felt at Camp Common Ground, the “intergenerational family camp” that she helped to found in 1994. Bissex was not only one of the camp’s organizers but a warm and friendly presence whose musical performances were enjoyed by attendees.

“Unlike many other singer-songwriters, who tend to be a little shy, [Rachel] was really outgoing,” says Jim Mendell, co-director of what is now called the Common Ground Center, and another of its cofounders. “She’d be singing on a porch and all of a sudden have 10 or 15 people singing on the porch with her. She was a really generous person who made everybody’s lives happier and more musical.”

This weekend, the Common Ground Center will host “Coming Full Circle,” a “mini music festival” that will celebrate Bissex’s life and mark the camp’s 20th year.

The all-day event on Saturday, May 10, will commence with a concert of kids’ music by Chris Dorman; afterward, attendees can enjoy brick-oven pizza and attend a contra dance hosted by Pete Sutherland and Lausanne Allen prior to a concert held in tribute to Bissex.

Among other performers at the concert will be violinist Emma Sky, the daughter of Bissex and local musician and playwright Steve Goldberg. Just as her mother was Camp Common Ground’s musical director for its first 10 years, Sky is now a regular instructor of violin at the nonprofit family camp.

The camp is reaching out to invite its neighbors to attend. Many attendees of the center’s programs come from out of state, Mendell explains. “Some people nearby don’t even know we’re here.”

For him, the event is significant not only because it’s a tribute to his friend and an anniversary celebration for the camp. It’s also something of a family reunion. “There are going to be bunches of people coming who we haven’t seen for many years,” Mendell says in a phone interview.

The concert will mark another milestone for Mendell and his wife, Peg Kamens, also a CCG cofounder. After 20 years in various supervisory roles, the couple will, in the fall, begin to hand over the reins to new co-directors: Neily Jennings and Connor Timmons, who were recently married at the camp.

Rachel Bissex remains a constant presence at Camp Common Ground: Her music is often played during meals, and her portrait hangs in the camp’s farmhouse. “She was such a big part of the camp, and we really miss her,” Mendell says. “A lot of the people who were here from the beginning want to reminisce about Rachel and how much she meant in their lives.” 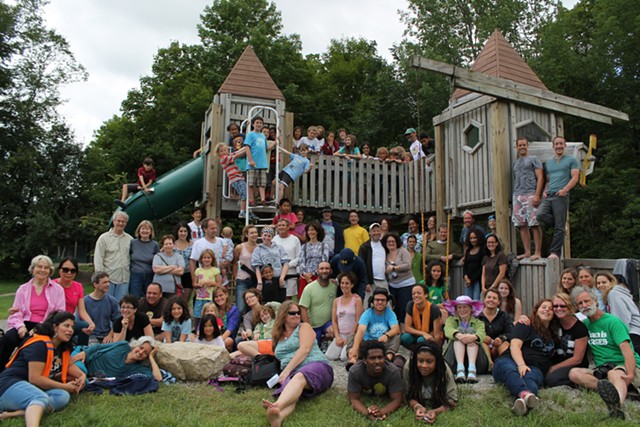