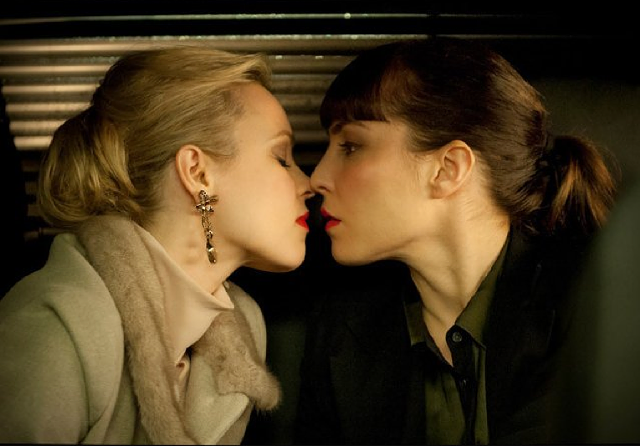 This week in movies you missed: Rachel McAdams and Noomi Rapace get uncomfortably close in the latest from director Brian De Palma, returning to his Hitchcockian thriller origins.

High-powered ad agency exec Christine (McAdams) loves to be surrounded by reflections of herself. She makes her lovers (of whom there are many) wear a mask that looks like a stylized version of her face. She has a creepy backstory involving her identical twin. And she's doing her best to make over her ambitious underling, Isabelle (Rapace), in her own image.

Christine takes credit for Isabelle's viral-video smartphone campaign, then patronizingly tries to turn her low blow into a teachable moment. Isabelle learns the lesson well and strikes back, seizing something her rival wants. But Isabelle is also sleeping with Christine's slimy boyfriend (Paul Anderson), which makes her vulnerable.

By the film's end, the women's twisted relationship will have encompassed murder, making out, police interrogations, double-crosses, trances, hallucinations and the wearing of umpteen sumptuous designer ensembles.

Despite all these enticing-sounding elements, Passion only played at 14 U.S. theaters. Unlike Love Crime (2010), the French film by Alain Corneau on which it is based, it didn't reach Vermont.

This French-German coproduction, set in Berlin, is now on video and Netflix and Amazon Instant.

One of my cherished movie-going memories is seeing De Palma's Body Double (1984) in high school with a group of friends who were not expecting anything that sexy/bizarre/messed up. For better or worse, Passion is a return to the trancey, trippy thriller style De Palma perfected in his '70s and early-'80s films. But Carrie or Dressed to Kill it's not.

1-4 points: Does it look pretty?
4/4. Oh, God, yes. Yes, yes, yes. From McAdams done up as a Kim Novak blonde in a procession of gorgeous outfits to the carefully modulated colors of the set design (e.g., a tawny boardroom giving way to a glowing green elevator), this is a film you just want to stare at.

Oh, and then there's the scene where Christine reads her email sitting in a hot tub in her palatial apartment in a sunroom surrounded by decorative birch trunks. The luxury was so ridiculously over the top that I felt like I was watching a "Dynasty" reunion.

1-4 points: Does what happens make sense?
2/4. That's where Passion has a problem, and starts to feel more like a De Palma parody or pastiche than one of his better works. See below.

1-4 points: Do the characters seem like real people? Failing that, do they look pretty?
1/4. Pretty, sure. Real, not so much.

I was hoping to watch Love Crime (also on Netflix) before I wrote this review, to see if its plot and characters were more sensical before De Palma got hold of them. That will have to wait.

But I do know that in Love Crime, Christine (Kristin Scott Thomas) is a generation older than her abused protégée, which makes sense. McAdams and Rapace, by contrast, are only a year apart. Furthermore, while she looks lovely in femme fatale gear, McAdams doesn't take naturally to this role. Maybe I've seen her in too many "America's sweetheart" parts (yes, I know she's Canadian), but I didn't buy her here. Mean girl, yes. Alexis Carrington, no.

Another, and crucial, problem: Isabelle is underwritten. We find out early on that she's sleeping with Christine's boyfriend, and she seems to care about him. But it's not clear when or how the affair started, who made the first move, whether she's in love, or anything that might help us comprehend her motivation as the film progresses. Has she been deliberately undermining Christine from the beginning, or did she just happen to fall for this guy? How innocent is she? Who the hell knows?

1-4 points: Does the movie give us a reason to care about anything happening on screen?
2/4. Because I didn't understand these characters, I didn't care about them, either. I was too busy admiring the scenery and guessing the upcoming plot twists. The only character who emerges as even vaguely sympathetic is Isabelle's meddling assistant (Karoline Herfurth).

Some will say that motivation doesn't matter in a movie like this. I disagree. De Palma's best films (to my mind) have characters with strong and clear motivations, even if those motivations are incredibly simple (to get laid, to stay alive, to go to the prom).

Verdict: 13/20. Both Passion and Black Swan make frequent use of the hallucinatory freak-outs and fake-outs that De Palma perfected with the final scene of Carrie. The danger of a film like this is that it starts to feel like one long dream sequence: Nothing has weight. Aronofsky avoided that danger by giving his main character solid motivations. For me, that makes the difference between a highly enjoyable, silly watch (which this was) and a great psychological thriller.

The Amazing Spider-Man 2, everywhere and all the time. America, is there any superhero franchise you won't embrace besides the ones with "green" in the title?

The Best Offer, Devil's Due, Escape From Tomorrow, Gimme Shelter, Gloria, Labor Day, The Legend of Hercules, The Selfish Giant.