Seth Rogen Comes to Burlington on May 1 | Live Culture

Seth Rogen Comes to Burlington on May 1 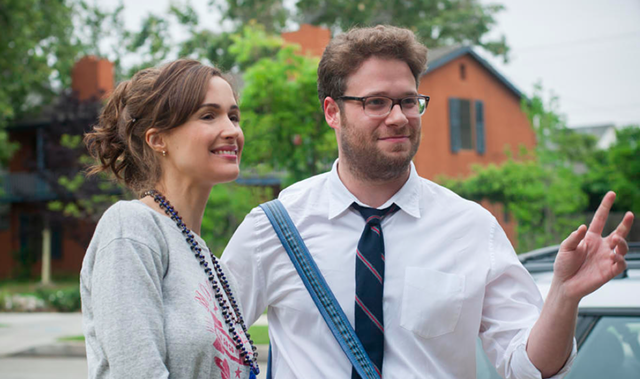 UPDATE 4/25: Owing to concerns about security at Rogen's appearance, we have removed any mention of its scheduled venue from this post. Please be aware that the screening is not open to the public, and its venue may change without notice.

In his new movie Neighbors, Canadian comedian Seth Rogen plays a nice family man who experiences hell on earth after he moves in next door to a rowdy college fraternity. In real life, Rogen's relationship with a certain University of Vermont fraternity is a lot more cordial. So cordial, in fact, that he and his wife, actress Lauren Miller, will come to an undisclosed Burlington-area theater on Thursday, May 1, to host a special, private screening of Neighbors for the men of Pi Kappa Alpha.


How'd that happen? Well, Rogen and Miller are outspoken advocates of Alzheimer's research — Miller's mother was diagnosed with the disease at age 55 — and started the organization Hilarity for Charity to get Generation Y behind the cause. Part of that is a collegiate contest called HFC U, in which more than 270 campus organizations around the country vied to raise the most funds for the Alzheimer's Association.

The winner? UVM's Pi Kappa Alpha, with more than $27,000 raised. (HFC U collectively raised nearly $130,000 for Alzheimer's research, according to an HFC press release.) Their prize is the special screening on Thursday, with Rogen and Miller in attendance for a Q&A.

Here are a WPTZ report and a Vermont Cynic article with details on the frat's fundraising effort.

So if you happen to see Seth Rogen around town next Thursday, just act normal. Maybe you could ask him if he's a freak or a geek, or how he feels about Vermont's maple penis. Meanwhile, check out this video of the funnyman testifying before Congress about the need for Alzheimer's research — a cause he's pretty damn serious about.