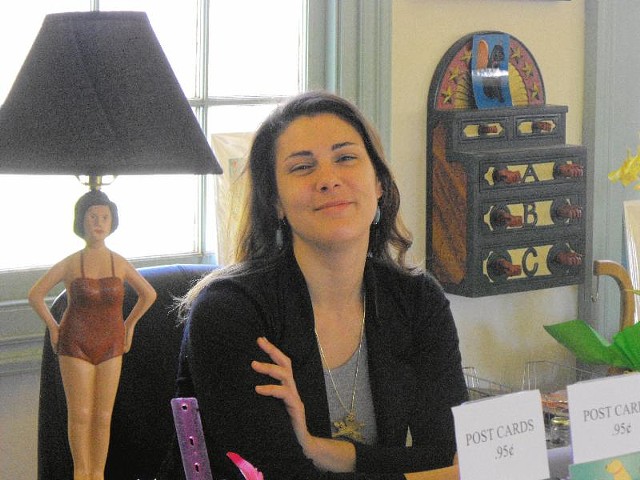 Most Vermonters are familiar with at least the general story of Dog Mountain, home of the Stephen Huneck Gallery and the Dog Chapel  in St. Johnsbury. (If you're not, you can read my September 2013 story about it here.) Following the suicides of the beloved canine-centric folk artist, in 2010, and his widow, Gwen, three years later, a handful of devoted staffers remained to carry on.

One of them was general manager Jill Brown, who today in Dog Mountain's e-newsletter announced her departure after seven years. She had been Gwen Huneck's personal assistant for the few years following Stephen's death and before Gwen herself succumbed to grief and took her own life. Both Hunecks died intestate; Gwen's brother, Jonathan Ide, who lives in Wisconsin, has been working through the muddled estate and trying from afar to put the gallery and tourist destination on surer financial footing.

Meantime, Brown, along with creative director Amanda McDermott and several other employees, has kept up the gallery's business — selling, shipping and cataloguing art; reproducing giclée prints, and creating new volumes in Huneck's line of "Sally" books (Sally Goes to Heaven is out this month). Brown and crew have also welcomed thousands of visitors annually to Dog Mountain and hosted popular dog parties.
Brown, who is relocating to Manchester, N.H., for a new job, wrote an eloquent and moving farewell letter that speaks to her experience as employee and friend to the Hunecks. Here is an excerpt:

I've had the privilege of working alongside one of the most prolific artists I've ever known. I've never known of another artist who worked in the countless mediums that Stephen did. I watched his doodles become great works of art. I've opened hundreds — no, thousands — of books for him to sign. I listened to tales of the wild adventures his art took him and Gwen on. He was generous, hilarious, kind, and was never afraid of what people thought about him or his work, the work that has brought so many people joy, happiness, strength, and love.

He taught me that we can learn more from our dogs than we can learn from most people. That the connection we share with our four-legged family members is a universal language. That it doesn't matter where we come from, if you've loved an animal, then you know what it's like to lose them, and sympathizing with someone who has lost a beloved pet is natural to comprehend. And he always told me that I had what it took to do anything in life I wanted to do.