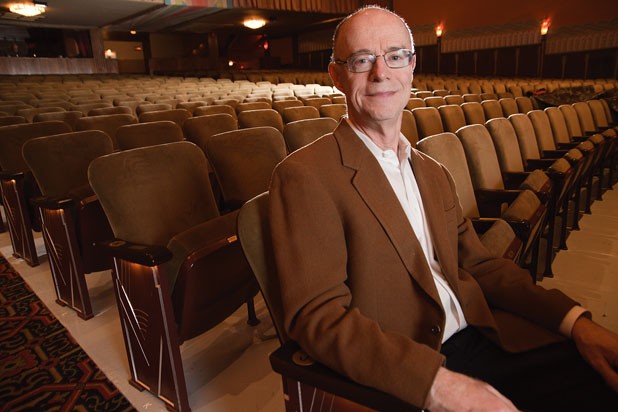 John Killacky, the Flynn Center for the Performing Arts' executive director, used to be a marathon runner and a professional dancer. But in 1996, at the age of 44, a mishap during spinal surgery left him paralyzed from the neck down.

"I still remember the night before surgery, I ran five miles," said Killacky during an interview in his office at the Flynn. "I just wanted to think, OK, well, I’m going to be out for a month. And so, 24 hours later, to be completely paralyzed, it was… an imploded body. And spirit, for sure."

This Friday, April 18, Killacky will speak with the Safe Space disability support groups organized by RU12?, a Burlington-based LGBTQ community center and advocacy nonprofit. He will share his personal story, which inspired him to create and coedit a Lambda-winning anthology of short stories called Queer Crips: Disabled Gay Men and Their Stories, which was published in 2004. The event will also feature screenings of films that Killacky created over the years.
"I've found that the only thing I can do is tell my own stories in as minutia a way as possible," Killacky said.

Killacky has made three films on "queer crips." In the first, Crip Shots, he collaborates with talented, established artists (who also identified as queer and disabled) including Judith Smith of the AXIS Dance Company and the late poet Christopher Hewitt, among others. In the second, Dreaming Awake, he reflects on his body and the bodies of other disabled persons, grappling personally with his body and his wheelchair, and films disabled persons without their "equipment" — wheelchairs, canes and the like.

Then, with his husband's experience as a caregiver in mind — "For better or worse, this was not what Larry had planned on," Killacky pointed out — he made a third film that focused on the partners of disabled artists, and the effect of the disability on the relationship.

"[Friday's event] is going to be huge, not just for the disabled people but also for their partners," said Brenda Pitmon, RU12?'s program coordinator for Safe Space.

"We envisioned a network of those support groups throughout Vermont, because the intersection of those two identities is a very vulnerable population," Pitmon said of Safe Space. "People with disabilities tend to be invisible in the LGBTQ community, and for people in the disability community, their sexual orientation, if they identify as LGBTQ, is invisible."

RU12? currently runs Safe Space groups in Burlington, St. Albans and St. Johnsbury. "It's been a great way for people to connect and to find support," Pitmon said. "Because [Vermont is] an isolating state anyway. If you're living out in the rural parts, you think you're alone and that you're the only person who has this identity. It can be damaging."

Of course, the circumstances that breed isolation and difficulty can arise in any location. For Killacky, the midlife onset of disability began on a random night in 1996, when he suffered what appeared to be a seizure in his sleep. His then-parner, now-husband, Larry Connolly, insisted on a doctor's visit and an MRI.

That test revealed a tumor in one of Killacky's C2 vertebrae, near the top of his spinal cord.

"[The tumor was way up high," Killacky said. "It was inside the cord, so they couldn’t do a bioposy, and they didn’t know if it was slow growing or fast growing. It was recommended to have surgery, and I was told that I would be in the hospital for three or four days and have a sore neck for about a month.”

The next day, he woke up from surgery unable to move his limbs.

Killacky eventually regained movement in his arms and legs and — with a dancer's diligence — slowly trained his body to stand and to walk again. But he never recovered sensation (such as temperature sensitivity, or pain) in the right side of his body, or proprioception (an awareness of the location of a limb) in the left side of his body. "So even though I’m standing and I know the leg is there, it’s like I’m standing on air," Killacky explains. Still, he rarely uses his wheelchair in public and has never once used it in his customary pre-show talks at the Flynn.

During his long recovery, Killacky faced daily challenges not only from his physical limitations but from a medical establishment that treated disabled patients from a heteronormative standpoint by default. In one instance that Killacky recalled, a psychologist in a rehabilitation facility told him and his partner that she couldn't predict when her paralyzed patient's sexual function would return, because she wasn't gay.

"I realized I would have to make my own community," Killacky said. And he did, using creative means. "My artist self was helping me all along," he added.

Now, Killacky said, he's looking forward to sharing and hearing stories with the LGBTQ and disabled community in Burlington, where he moved in 2010 to lead the Flynn. "What I've been affirmed by is that people find [personal storytelling] very powerful," he said. "It resonates."