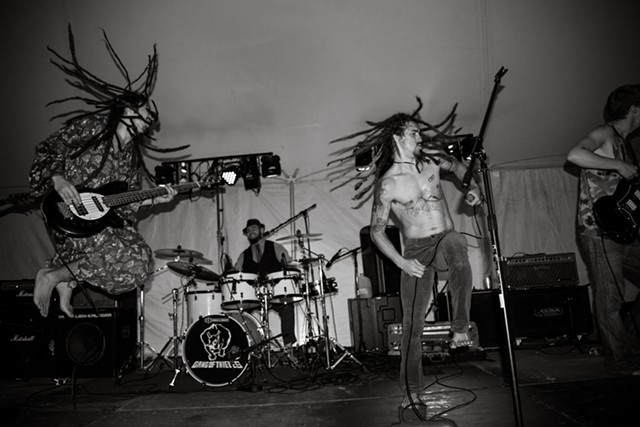 On Sunday, April 20, local rockers Gang of Thieves will release their new album, Thunderfunk, with a show at ArtsRiot in Burlington. Why April 20? Well, because it's Easter Sunday, of course. And as we all know, no band is down with Jesus and/or the Easter Bunny like GoT. Hallelujah. Praise Cadbury.

What's that? You think maybe there's some other reason the show is on 4/20? Y'know, four-twenty. (Wink, wink.) Hmm. That hadn't occurred to us, actually. But that couldn't possibly be the case. After all, this ain't no weed-fueled outlet.

While we relax with some totally legal medicinal herb — for the cataracts, doncha know — and attempt to unravel that mystery, here's a video for the first single from the band's new record, a spunky little ditty called "Sexy Star Circus." The song is a pretty rollicking party anthem and the video follows suit, featuring plenty of party people, choreographed dancing girls, hula hoops and a cameo by some of the the dudes from Rough Francis — including, in the interest of full disclosure, Seven Days' own Bobby Hackney Jr. Dig it.