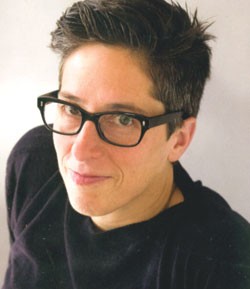 Alison Bechdel, the Bolton cartoonist best known for her long-running comic strip "Dykes to Watch Out For," will deliver the Will Eisner Spring Lecture for the Center for Cartoon Studies on April 10. The lecture will take place not at the CCS' campus in White River Junction but at nearby Dartmouth College.

Bechdel, who discontinued "Dykes" in 2008, received tremendous acclaim for her illustrated memoir Fun Home, which was later turned into an off-Broadway musical that ended its run in January at New York City's Public Theater.

Bechdel followed that book with 2012's Are You My Mother? A Comic Drama. That was the same year she won a Guggenheim Fellowship and a Bill Whitehead Award for Lifetime Achievement from Publishing Triangle, an organization devoted to LGBT people in the book industry. She also was profiled in the New Yorker.

Alison Bechdel speaks on Thursday, April 10, at 4:30 p.m. in Room 100 of the Life Sciences Building at Dartmouth College, Hanover, N.H.