I Heard the People Sing at Lyric's 'Les Mis' 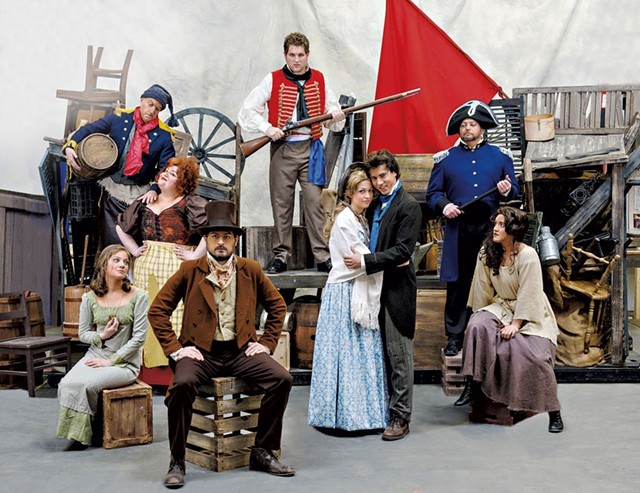 I've never heard a standing ovation at the Flynn MainStage quite like the one that Lyric Theatre Company's production of Les Misérables got Saturday night. It was long, it was loud, and it started well before the last notes of the reprise of "Do You Hear the People Sing?" had faded. The audience really, really liked this show.

It won't earn me any hipster points (like I ever had any) to say this about Les Mis or a community theater production, but I was blown away, too.

This is a huge project for 40-year-old Lyric, as Xian Chiang-Waren chronicled in our paper last week. The show has 34 named characters and many more in the ensemble. Its action takes place over 17 years in locations all over France, ranging from a shipyard to a provincial town to a Paris sewer. Its plot involves multiple carefully choreographed scenes of onstage violence and death, not to mention allusions to historical conflicts and figures with which few Americans are familiar (why does everybody care so much that General Lamarque is dead?!).

Granted, this was my first time seeing Les Mis onstage. But I think Lyric pulled it off.

The staging was as complex as it needed to be while staying flexible. House façades framing the stage served to represent any town or city, while a projected backdrop supplied stylized suggestions of more precise locations. All the other set pieces — such as the revolutionary students' barricade — were mobile, and the cast swung and snapped them into place without a break in the singing.

I was impressed with all the principals, from Ian Ferris as Jean Valjean — a tour de force in an incredibly demanding role — to my personal favorites, Bob Bolyard and Margaret Garafalo as the vile, venal innkeepers M. and Mme. Thénardier. (Their uproarious rendition of "Master of the House" probably got as much applause as "I Dreamed a Dream.")

Yet what really struck me in this show was the ensemble. When you're in the background, it's easy to let your characterization slide — who's gonna notice you? But under Kelly Kendall's direction, Lyric's players stayed in character, whether they were supposed to be wharf-side whores, factory workers, peasants, guttersnipes or bourgeois wedding guests. Their reactions to the main action made the melodrama feel more real.

As it should. Because when Victor Hugo wrote a nearly 2,000-page novel called The Wretched Ones, he meant to portray an entire society from the bottom up, not just a handful of characters with big problems.

I first encountered Les Misérables in a French graduate seminar, where we read the entire tome en français. The prof played us a few songs from the musical, and I thought they were pretty corny. The 1998 nonmusical film version (with Liam Neeson as Valjean and Claire Danes as Cosette) didn't seem to me to capture the novel's unwieldy power. (As you read those hundreds and hundreds of pages, you often feel like Hugo is pummeling you with a blunt instrument. But it's a blunt instrument wielded artfully by a genius.)

Much later, in 2012, when I saw Tom Hooper's film of the musical, I thought, This is it. This is what I read. I ran out and bought the 10th-anniversary concert album.

Now, I'm not saying Les Mis isn't corny or melodramatic. It sure is. But the musical is also far darker than I expected for a huge, crowd-pleasing hit, and it captures aspects of the Hugo novel that a more literalist translation to stage or screen simply can't.

Because, here's the thing: Hugo took gritty historical consciousness and grafted it to melodrama. He saw no contradiction between the two. It helps to understand something about 19th-century France: Its history already was melodrama. It was soap opera on a national scale. The story arc of France between 1789 and 1832 makes the plot of "Scandal" look uneventful.

Consider: What started as a tidy little bourgeois revolution morphed into a fascist regime — the Terror — under which months and holidays were renamed, revolutionary correctness was rigidly enforced and blood ran in the streets. Then Napoleon took control, and suddenly France was an empire threatening to conquer all of Europe. Ambitious young men dreamed of rising from nothing to become generals — only to have their hopes dashed in 1815, when Napoleon fell and the same old monarchy returned. (Read Stendhal's The Red and the Black to learn more about what all that red/black symbolism in Les Mis means.)

That's where Les Mis starts: with the year of Waterloo. (Hugo actually devotes 19 chapters to an epic retelling of the battlefield action.) Jean Valjean doesn't care about Napoleon's fate, of course, and for Hugo, that's the point. He's trying to find a way to reconcile the down-and-dirty concerns of the poor and downtrodden — les misérables — with the lofty preoccupations of intellectuals and political revolutionaries. He does it with sentimentality, optimism and an inclusive, humanist Christianity.

(Warning: spoilers for a 152-year-old novel, a 29-year-old musical and 182-year-old historical events ahead.)

Most historians seem to agree that France didn't have a true populist revolution until late in the 19th century. Each successive revolution used "the people" as a potent symbol, but rarely did the common people actually turn out en masse in support. In 1832, the revolutionaries were idealistic students and intellectuals who were, to put it bluntly, out of touch. They paid dearly for their idealism. (In the musical, they are warned that "the people" won't join them at the barricades. It turns out to be all too true.)

So here's what I love about Les Mis, both book and musical: It's a massive epic of failures and dead ends. Fantine's "dream" (born in the heady Napoleonic era) turns to dust. Jean Valjean spends his entire life as a fugitive, no matter how much good he does. The revolution turns into a mass grave. The girl the audience roots for (Eponine, duh!) doesn't get the guy. Even Javert fails to accomplish his simple goal to his own satisfaction. The only ones who consistently triumph are the Thénardiers, because all they care about is cold, hard cash.

It's a dark vision. Granted, Hugo mitigated it by crowning his novel with the happy marriage of Cosette and Marius, which represents a more egalitarian future. (She's the illegitimate offspring of a prostitute; he's heir to a fortune. In the 19th century, this would have been a highly unorthodox match, which almost reconciles me to their treacly relationship in both book and musical.)

But the central message stands: Many lives will be sacrificed before anything changes for the better, in France or elsewhere. As Enjolras sings, "Our little lives don't count at all."

It's a weird theme for a musical that brings people surging to their feet, but there you have it. By giving the dreams and sorrows of people like Valjean and Fantine such powerful expression in song, the show convinces us that, all historical evidence to the contrary, our little lives do matter.

And that's why it mattered that Lyric's ensemble inhabited its roles so fully. I'm far from qualified to judge the production on musical or technical grounds, but I think Lyric succeeded in evoking an entire world onstage. It kept me absorbed in that world for nigh on three hours. And that feat more than justifies the standing ovation.