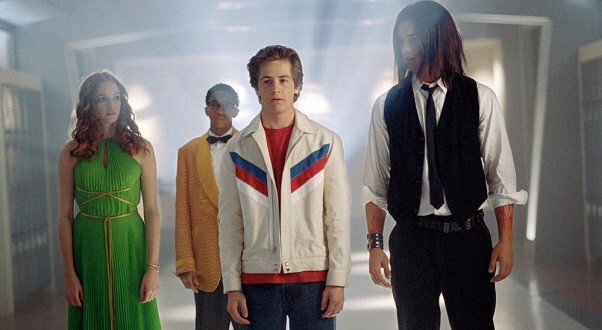 My in-laws visited recently for a short stay, so every day was pretty well packed with activities. In the evenings, we were all a little wiped out, but my wife’s 6-year-old nephew could generally be counted on to have a little energy in his reserve tank. On one of those evenings, we decided that a movie was in order, but that it had to be a “family-friendly” one. You know – for kids.

I have plenty of animated films in my DVD collection, but the kid has seen (and can recite dialogue, verbatim, from) most of them. Anyway, it always seems to me a bit of a slippage to simply consider animated films to be kids’ films: I’m a grown-ass man, and I like watching animated films. And most films in the digital era are, to some extent, animated films, anyway. I digress.

It was my wife who alighted on Sky High on the DVD shelves. This is a movie I’d seen many times but that was unknown to everyone else in the room. It may be carefully engineered by Disney market researchers to be family friendly and inoffensive, but damn if it isn’t clever and enjoyable all the same. Plus, it has Kurt Russell in it – always a boon, in my book.

When the film came out in 2005, it was not unfairly compared to The Incredibles, which had been released the previous year (and which is, as fond as I am of Sky High, a superior film). At the hearts of both movies is the premise “What if there were a whole family of superheroes?” Generally speaking, The Incredibles addresses that idea from the point of view of the parents; Sky High addresses it from the point of view of Will Stronghold (Michael Angarano), the only child of the Commander (Russell) and Jetstream (Kelly Preston), the two most super-duper superheroes in the universe of the film. 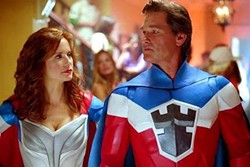 The title of the film refers to a high school for superheroes-to-be; it uses antigravity technology to hover in the clouds, and students are shuttled to it in a rocket-powered school bus. On the first day of their freshman year, all students are sorted (in a manner reminiscent of the “Sorting Hat” in the Harry Potter books and films) into one of two “tracks”: Hero or “Hero Support,” which is a polite way of saying “Sidekick.” Sidekicks have powers that are generally unhelpful for crime fighting: One kid melts into a puddle, for instance, and another is a shape-shifter … but can only transform into a guinea pig. Will is slotted into the “Hero Support” track because, even by the start of his first year of high school, his powers have not yet manifested themselves, despite the fact that his parents are the top superheroes in the world.

It’s when Sky High combines the high school film with the superhero film that, to me, it gets more interesting. Like most high school films, Sky High is about teenagers discovering their true identities and finding a social group; often, they learn about sex, too. (Fast Times at Ridgemont High is perhaps the supreme example of the high school film — which, by the way, film scholars regard as a full and legitimate genre. Rock ‘n’ Roll High School and The Faculty are two others that I particularly admire.)

The “development of powers” is a pretty plain metaphor in this case for “the onset of puberty,” and, once viewed in this light, Sky High becomes especially clever. Will’s troubles all have to do with fitting in at his new school, making friends, gaining his father’s trust and cultivating his first love. Before his powers (super-strength and flight: a rare perfecta) manifest themselves, Will has none of those issues figured out. After his powers develop — that is, after he starts along the road to maturity — he begins to get his life in order. For this reason, I’ve always regarded Sky High to be a superhero film at only the most superficial level. Ultimately, superheroism (is that a word?) is really just the unusual context in which Sky High, a high school film through and through, unfolds.

This “generic cloaking” may well be a conscious effort on the part of the filmmakers to offer “something for the kids, and something for the adults.” Pitching a film to the widest possible audience is indeed the ultimate goal of Hollywood studios, and a “family film” like this one has to keep the parents entertained while the kiddies gawk at the brightly colored, fast-moving images. Whatever the reason, it’s always satisfying to find a popular film that possesses more than one level of carefully constructed meaning. I’d be happy to watch Sky High yet again, even without a 6-year-old in the room. (He enjoyed it, by the way.)

As a final note on those brightly colored images:
Apparently — at least, according to every toy maker and advertiser in the entire world — kids prefer everything to be of vivid hue (is this actually true, though?). Everything in Sky High is effectively color-coded. Each hero and each villain is closely associated with one or another particular color. This Froot Loops palette primes young viewers to use visual information (not just character/story information) to track the story’s development, and this to me seems like a pretty valuable skill for them to learn.

A great deal — perhaps even the majority — of any film’s narrative information is conveyed to viewers through means beyond the mere utterance of dialogue. This color-coding in Sky High is a bonus for me, since I’m generally primarily interested in films’ visual styles. Though I’ve seen films that use this particolored palette in subtler and richer ways (the brilliant and misunderstood Speed Racer comes to mind; so does The Umbrellas of Cherbourg, which, if pressed, I might name as my favorite film ever), it provides yet another, somewhat unexpected dimension of pleasure for the viewer of Sky High. 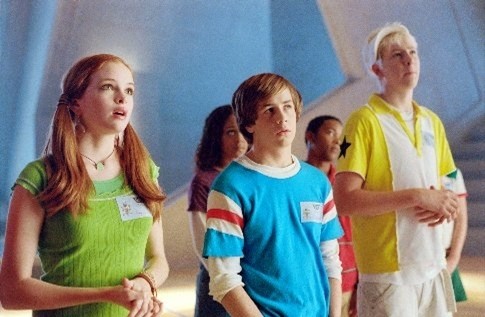