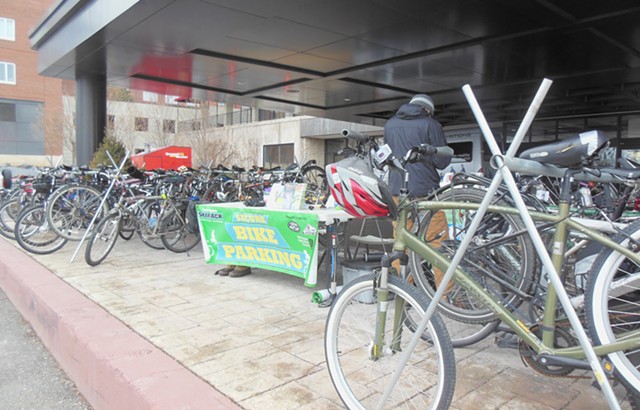 Cycling culture keeps getting stronger in the Burlington area, but the infrastructure to support it hasn't developed as quickly or as extensively. Those dynamics were the focus of the first statewide walk/bike summit held at the Burlington Hilton on Saturday, March 29, and attended by more than 250 people-powered transportation enthusiasts.

Vermont is beginning to accommodate alternatives to the private automobile, Deputy Transportation Secretary Sue Minter said during a panel discussion. But the administration of Democratic Gov. Peter Shumlin has had to build on a flimsy base, Minter pointed out. From 2003 to 2011, “no new bike and pedestrian programs were being enabled,” she said, referring to the years when Republican Gov. James Douglas was in power.

Since Shumlin's election, Minter added, the state has invested about $8 million in cycling and walking initiatives. But “we're not taking big steps forward,” observed fellow panelist Noelle MacKay, commissioner of the state Department of Housing and Community Affairs. And that's partly because of “how slowly things move in the legislature,” said the third panelist, Progressive State Rep. Mollie Burke of Brattleboro.

Piecemeal progress is occuring in parts of the state, however.

Burlington will experience an upgrade of its cycling infrastructure with the reconstruction of the lakefront bike path between Perkins Pier and North Beach. The widening and rerouting project gets underway this summer, but much of the work will take place in the fall when the path is less heavily used.

Another advance: The bike ferry linking the Colchester Causeway to South Hero will operate seven days a week this year, from mid-June through Labor Day. Weekend-only service starts May 24 and resumes from September 2 through early October.

Development of a safe and extensive cycling network is “critical to being a great city,” Burlington Mayor Miro Weinberger said in his welcoming remarks at the summit. And the city's layout could allow it to to move decisively in that direction, Weinberger added, because “much of Burlington was built before automobile.” At the same time, however, existing infrastructure is “deteriorating quicker than we can invest in it,” the mayor noted.

In a well-received talk punctuated by videos and slide shows, Sampanaro outlined the gains made by her nongovernmental organization during the past decade. With pedestrian malls installed along much of Broadway in Midtown Manhattan — including Times Square — and with hundreds of miles of bike lanes added throughout the five boroughs, Transportation Alternatives has helped radically reshape modes of mobility in New York City.

A key to progress, Sampanaro suggested, is to put pilot projects into place at every opportunity. Because a majority of New Yorkers support safer streets and easier forms of transport, they rally to defend improvements in their neighborhoods, she said.

Sampanaro described a few of the campaigns her organization has spearheaded, including installation of cameras that record car speeds and enable warnings and tickets to be issued to speeders. It's an important effort in a city in which more people die in car accidents than from gun violence, she noted.

Transportation Alternatives was fortunate to have had a sympathetic mayor, Michael Bloomberg, in office for 12 years, Sampanaro said. Bloomberg's recently inaugurated successor, Bill de Blasio, looks to be an ally as well, she added.
But her group remains advocacy focused, which involves partisan campaigning, Sampanaro said. “My role is making political space,” she said, suggesting it can be productive to “make innovation an election issue.”

Transportation Alternatives is able to confront city hall, when necessary, because it functions independently of government. “We don't take any money from DOT,” Sampanaro noted, referring to the city's Department of Transportation.

Her group differs from Local Motion in that regard. The 15-year-old Burlington-based cycling and pedestrian group is heavily dependent on government funding. It reported receiving $182,055 in government grants on its 2012 federal tax returns.

Does that financial relationship impede Local Motion's ability to act as effectively as Transportation Alternatives?

Emily Boedecker, Local Motion's new executive director, responded in an interview on Sunday that “in Vermont we don't have substantial private funding sources like in New York.” Local Motion's approach, she said, is to “work in partnership” with government agencies and businesses. “We get more done when we bring together as many people as possible around the table.”

In an interview following the Saturday summit, Boedecker said her goal for the coming years at Local Motion is to “build a mobility movement, not just in Burlington and Chittenden County but throughout the state.”

Sampanaro cited the same aspiration in her keynote address. “Build a movement,” she urged her listeners. “It's how change happens.”