Without knowing it, I commemorated the 20th anniversary of the release of Jan de Bont's 1994 action film Speed by watching it for the first time in years. I suppose it will date me to admit this, but when I watched the film a little while ago (probably about the 10th or 12th time I've seen it), it was the first time that I had seen it via any sort of digital medium. I saw it in 35mm in more than one Connecticut movie theater during its initial release, and, thereafter, if you can believe it, most of my viewings of Speed were courtesy of my old LaserDisc copy of the film. This time, I watched it on the two-disc "Five Star Collection" DVD, which is itself over a decade old. Gracious, how did I get so old?

While I have nothing against digital formats, I do have sort of a soft spot for LaserDiscs, a format whose time never really came. I still have my old battleship of a Pioneer LD player hooked up to the home stereo system ... though the hundreds of LaserDiscs in my possession are currently in boxes in the basement. Can't say as I watch 'em very often, but I hang on to them for some reason, maybe because of my students' wide-eyed puzzlement when I show them what looks like an LP-sized CD. (Three outdated technologies for the price of one!) 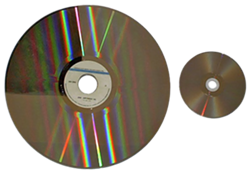 It's worth noting that the video images carried by LaserDiscs are not digital. Their information is not recorded as a series of ones and zeroes, but as a series of etched "pits" whose length and shape actually plays a part in determining the nature of the image. By definition, this is an analog process. (Wikipedia has a pretty good explanation of this subject.) Some LDs do indeed include digital soundtracks, but the technology is itself fundamentally analog.

When Speed was released in 1994, LaserDiscs represented the cutting edge of home video. Both their image quality and sound quality surpass those of wretched old VHS; as well, LaserDiscs could store up to four separate audio tracks, one of which was often dedicated to spoken directorial commentary. In these and other ways, the LD was the forerunner of the DVD.

LaserDiscs were the "connoisseur's choice" for home video back in the mid-1990s, when I bought my own LD copy of Speed. I didn't really start buying them in earnest until the late 1990s, when their prices had dropped quite a lot. I likely bought Speed on eBay, where I bought many of my LaserDiscs, including such gems as Larry Cohen's God Told Me To and, before it was ever released on DVD, Will Success Spoil Rock Hunter?

So, if I was a self-appointed connoisseur, and I was building up a LaserDisc library of unusual and/or critically acclaimed films, why did I purchase the LD of Speed, and why have I seen it so many damn times? For no reason other than that I consider Speed to be a little bit of a masterpiece. 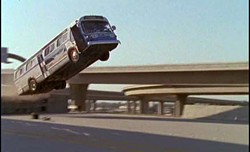 Speed may not necessarily represent a "resetting" of the conventions of the action film in the way that Die Hard does, but it is almost certainly the next major stepping stone in the genre's development. Speed was Jan de Bont's first film as a director; he'd been a cinematographer on, among other films, Die Hard itself, Black Rain and The Hunt for Red October — terrific-looking films, all.

And, no doubt, Speed is a smartly directed film that features several extremely clever, fundamentally visual setpieces. Indeed, the film's cleverest narrative turning point is a visual one: when Jack Traven (Keanu Reeves) figures out how to use a looped videotape to trick Howard Payne (Dennis Hopper) into thinking that the latter is still in control of the bomb-rigged bus.

Still, what impresses me most about Speed is its writing — specifically, the three-part narrative structure, each part of which is anchored by a central, extended action scene. (First part: the rigged elevator; second part: the rigged bus; third part: the subway chase.) This was (and remains) an unusual and bold way to arrange the story, and it imparts to Speed a remarkable degree of intensity. It works like this: The elevator scene, which goes on much longer than one might think, is plenty harrowing, but the bus scene (which occupies more than half of the film) ramps it up even further. And then, just when you think that the tension has finally been relieved as the passengerless bus explodes on collision with a huge airliner, the subway scene ices the tension-flavored cake with a thick layer of tension-flavored icing. Speed uses an unusual structure to tap into the deep roots of the action film, and for this I will always love it.

Ironically, it's precisely that unusual structure that makes Speed a somewhat poor choice for viewing on LaserDisc. LaserDiscs, like vinyl records, are two-sided affairs: You need to flip one over midway through its runtime. Many players, like my own, actually have a laser assembly that, when Side A ends, moves mechanically inside the machine to play Side B. Still, whether you have to get up and flip the disc, or whether the player does it for you, the watching of a feature film on LD entails a pause that usually falls at about the one-hour mark. (Long films would span multiple discs.)

About one hour into Speed, we are right in the middle of the film's central and most famous action scene: the bus that cannot slow down below 50 miles per hour. That format-specific pause breaks the tension that the film's script so carefully works to create.
I had a friend in grad school who claimed that he appreciated that pause, precisely because it was part and parcel of the LD experience. Sort of like how if you enjoy going to auto races, you better learn to appreciate the smell of car exhaust. And, while I see his point, I'm more interested in having an uninterrupted cinematic experience; for the same reason, I still refuse to get up during a film to use the bathroom, no matter how pressing the need. (I made an exception once when I was dragged to some horrible Adam Sandler movie; the bathroom break was more pleasant than the film.)

And so, while I do still have this weird fondness for LaserDiscs, I grudgingly grant that they are not ideal, and may in fact be detrimental to the experience of viewing certain films.

Now, if you'll excuse me, I have an appointment to watch What the Butler Saw on my kinetoscope.