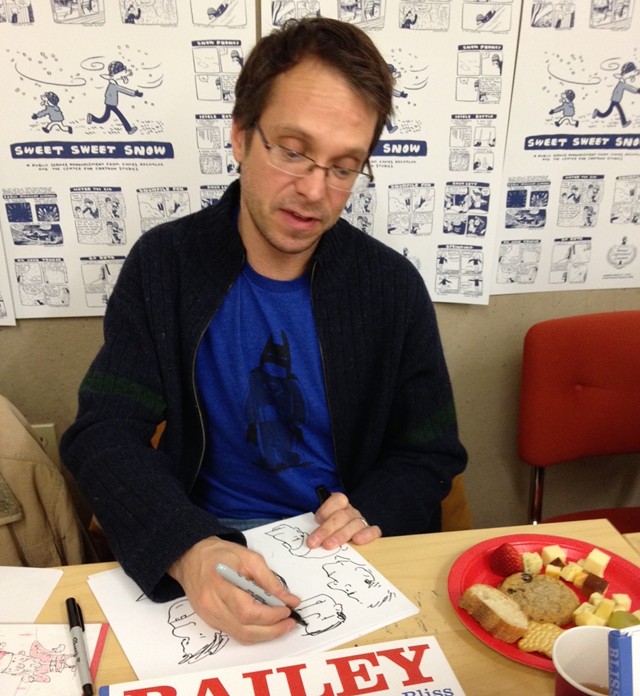 Vermont-based cartoonist Harry Bliss is known for his cartoons and occasional cover illustrations for the New Yorker. In addition, his comic strip Bliss runs in Seven Days and numerous other newspapers, and he has illustrated a series of children's picture books. Yesterday, Bliss learned that he's been named one of two recipients of the 2014 Maurice Sendak Fellowship. Designed to nurture the talents of artists who tell stories will illustration, the fellowship grants its recipients five weeks of bucolic isolation, the better to complete their work.

Sendak, the beloved children's book illustrator who died in 2012, established the fellowship in in 2010. In previous years, recipients would gather at Sendak's home in Ridgefield, Conn. This year, the location of the fellowship will be at another of Sendak's properties: the 150-acre Scotch Hill Farm in rural Cambridge, N.Y., located about 30 minutes from Manchester, Vt.

Bliss says he was surprised and delighted to receive the award, for which he did not know he'd been nominated. As he tells Seven Days in a phone interview, the letter that announced his award was the first he knew about it.

As it happens, Bliss knew Sendak fairly well. "He was a great guy and a big influence on me my whole life," the cartoonist says. "In fact, we traded artwork once. He wanted a New Yorker cover I'd done, and I traded it to him for a wonderful little piece from [Sendak's 1962 children's book] Chicken Soup with Rice." Sendak even customized the piece for him, Bliss says, adding a hockey stick and skates to a character's hand, much to Bliss' delight — he's a big hockey fan. "That was really super-cool," he says. "Maurice was a special man."

Writer and artist Nora Krug, creator of, among other things, the graphic novel Red Riding Hood Redux, was this year's other Sendak Fellowship recipient.

During his five-week stay at Scotch Hill Farm, Bliss intends to work on the illustrations for a graphic novel written by the author Ray Negron. That book, to be published by Penguin Books, is based on the true story of a young boy who is caught "tagging" Yankee Stadium in the 1970s. Instead of having the boy arrested, Yankees owner George Steinbrenner took the boy under his wing, Bliss says, offering him a job as a batboy; he still works for the Yankees to this day.

"It's a great story, a very inspiring story," says Bliss.

He's already told the fellowship committee that he's looking forward to working on the organic farm on the Scotch Hill property. By then his back — which he wrenched this week shoveling out from Vermont's latest snowstorm — should be good to hoe.