Stowe's 13-year-old West Branch Gallery & Sculpture Park is expanding — again. It wasn't that long ago that co-owners Chris Curtis and Tari Swenson created the cozy Upstairs Gallery in their high-ceilinged quarters on the Mountain Road. Later this month, they'll reveal the latest addition: a wing for landscape painting.

While the works vary in style and medium, they have one thing in common aside from natural subject matter: "It's very skilled, and very soulful," said Curtis by phone from Stowe. "Some are very traditional scenes, but they're rendered so beautifully," he added.

So why is a gallery known for its contemporary paintings and sculptures, um, branching into a genre as old as art itself?

Two reasons, said Curtis. The first is sheer availability. "We get submissions coming in continually," he said, including "a lot of wonderful art that doesn't fit our contemporary gallery."

The second reason may sound esoteric but is actually backed up by science: looking at landscapes, whether real or painted, is soothing.

"We were in the competition for [creating] artwork for the new psychiatric facility in Berlin," Curtis noted. "And in the process of research, we discovered there is scientific proof that earthbound, landscape-y images have a positive impact on psychiatric patients.

Besides, he said, "A lot of people come in and they like the gallery, but they think it's not for them."

So really for three reasons, Curtis, who creates large-scale stone sculptures, and Swenson, a painter whose delicate work is Asian-influenced, decided to put landscape in their gallery's mix. 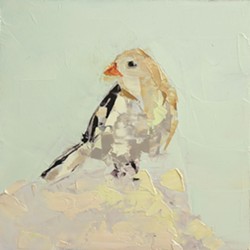 The group exhibit in the new, pewter-painted room will open with a reception on March 22 concurrently with two other solo painting shows: Rebecca Kinkead in the main gallery space and Tom Cullins upstairs.