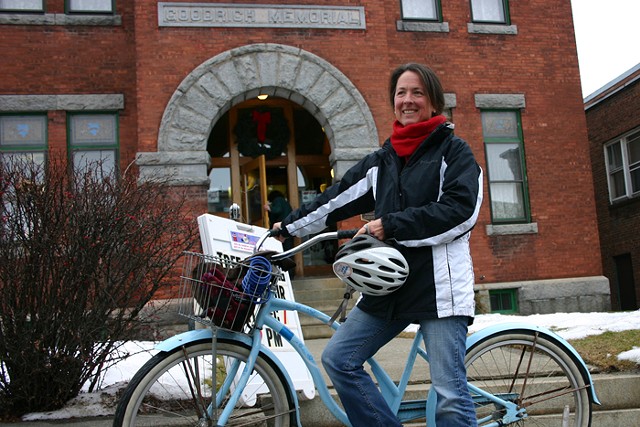 A woman moves to Newport from a city with 12-lane freeways. She finds herself riding her turquoise beach cruiser along the shores of Lake Memphremagog, looking out toward Owl’s Head, and realizes that something special is happening to her.

After six months in town, she starts a Facebook group so her friends and family around the world can see what she’s up to. She calls it “I Heart Newport,” because she doesn’t know how to make the heart-shaped emoticon. She’s not sure how it happens, but someone in town sees the Facebook page, and then someone else does, and then others. Soon some 200 people in the area have joined, including Newport Mayor Paul Monette.

The woman is Beth Barnes, and she has quickly become a community organizer and Newport cheerleader.

Barnes started an open mic night at Newport Natural Market & Café. She has used I Heart Newport to organize cash mobs at local businesses. She found a part-time job as coordinator of Northeast Kingdom Learning Services’ “Fit and Healthy” program. One of her tasks is to promote alternative transportation, so Barnes recently hosted a forum to encourage walking and biking.

“I’ve worked in corporate health care, but I’m not a corporate animal at all,” she says. “I’d rather do something positive for a small community.”

And that she does.

“Beth is certainly passionate about having Newport become a place where people will want to visit or move,” observes Monette.

Barnes’ story started out west, far from the shores of Memphremagog. She’s a California girl who grew up in Long Beach and has always been active in water sports. At a young age, Barnes learned to sail on Alamitos Bay. She became a certified SCUBA diver at age 15. While earning a bachelor’s in business economics at the University of San Francisco, she spent her free time sailboarding in the San Francisco Bay and swimming with the local Dolphin Club.

Barnes’ passion for swimming has taken her many places, including the Great Barrier Reef in Australia and the Dead Sea in Israel.

When she turned 30, she decided to walk away from her corporate job and spent the next 13 months backpacking around the world. She ended up living in England for 12 years before returning to Long Beach in 2001.

Back in California, Barnes pursued her passion for swimming in open water. During the 2010 to 2011 season, she took part in 20 Catalina Channel crossings, a 21-mile swim. To encourage others to participate in open-water swimming, she started working as an escort kayaker, meaning she followed swimmers in her kayak, prepared for any emergency. She even consulted with U.S. Navy SEALS to better understand what to carry and how to respond to unexpected difficulties.

Barnes initially came to Vermont in February 2013 to help Phil White organize the Kingdom Swim, an open-water competition on Lake Memphremagog. White, who started the event, reached out to her because he’d heard of her reputation as an escort kayaker in the small world of open-water swimming. Before driving cross-country to organize the summer event, Barnes had visited Newport just once. As she worked with Kingdom Swim, she started looking at houses. By July she was the proud owner of a beautiful Victorian on Prospect Street, and her belongings arrived by 18-wheeler shortly afterward. She has been in Newport ever since.

“I think great things are just around the corner for this town,” Barnes says. “I’ve always had this dream of living in a small town and really being part of it.”

At age 56, Barnes knew very little about Vermont before coming here, but says it always seemed like a magical place to her.

What locals notice most about Barnes is that she seems genuinely happy. She really does “heart” Newport, and her enthusiasm has affected those who’ve joined her Facebook group.

“I’m pleased with Beth for helping to get the word out via her Facebook group on events and healthy activities,” Monette says. “Especially in the age of technology, where people sit behind the computer all the time.”

Barnes sets a good example by riding her bike around town. “The beach cruiser handles great in the snow,” she says.
“I always knew I wasn’t a big-city girl,” Barnes reflects. “How lucky was I to find Newport, Vt.?”